Religion and Politics in SE Asia 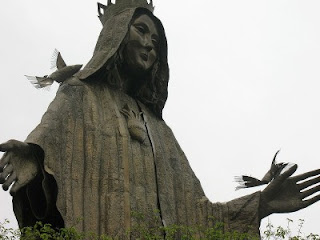 Last Monday, Philippine President Benigno Aquino III reiterated his endorsement for ‘responsible parenthood’ as a solution to curb the country’s high birth rate. This irked some Catholic bishops who immediately accused the president of launching an all-out war against the church.

Early this month, officials of Singapore's City Harvest Church were arrested and charged with breach of trust. Investigators alleged that the church had used US$19.2 million of charitable donation to finance the church founder’s wife’s pop music career.

Last May, Malaysian police raided a printing house and detained its director over the publication of a banned book by a liberal Muslim activist.

These separate incidents highlight the special role of organized religion in several Southeast Asian societies. They reflect the political power of churches and the popularity of church leaders among the masses.

In the case of the Philippines, critics are blaming the obstinate opposition of the church for the repeated failure of Congress to pass legislative measures on reproductive health and divorce. The Catholic-dominated Philippines is the only country in the world without a divorce law.


Meanwhile, the scandal involving Singapore’s largest congregation sparked debate about the practice of tithing. It also led many people to question the moral fitness of church leaders who were reported to be living in luxury.

On the other hand, the raid in Malaysia became controversial because it exposed the lack of religious freedom in the country. The raid came as no surprise to many analysts and observers, however, who have been raising concerns about the growing religious intolerance in the country.

Despite being a Muslim majority nation, Malaysia is known for promoting religious harmony.

Today, there is a demand from many sectors, especially the academy, for an interfaith dialogue to defuse religious tension, end religious discrimination, and revive the spirit of multiculturalism.

Indonesia too could benefit from interfaith dialogues given the rising number of cases of religious violence in the archipelago. At the minimum, it should revisit its law granting legal protection to only six major religions. Scholars believe the non-recognition of minority religious sects has given impetus to hardliners to attack small churches and their followers.

Cases of religious persecution have been reported too in Vietnam where several Christian groups have taken the lead in organizing resistance to development aggression projects. Rohingya, the stateless people of Southeast Asia, are facing religious discrimination too in west Myanmar.

Religious conflicts can sometimes lead to protracted wars. Since the 1970s, for example, the Philippines has been facing a separatist movement in the Muslim-dominated areas of Mindanao Island. Similarly, Thailand continues to battle an Islamic insurgency in the south part of the country.

Religion is not often discussed in the meetings of the Association of Southeast Asian Nations. It’s understandable since there is no dominant religion in the region. But if religious bigotry leads to the repression of minorities and the killings of innocent civilians, then it’s necessary to put this matter in the mainstream agenda of the grouping. There’s no point talking about democracy and regional solidarity if discrimination based on religion is allowed to flourish in many Southeast Asian countries.


By Mong Palatino for The Diplomat