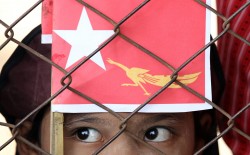 LAST spring, a flowering of democracy in Myanmar mesmerized the world. But now, three months after the democracy activist Daw Aung San Suu Kyi won a parliamentary seat, and a month after she traveled to Oslo to belatedly receive the 1991 Nobel Peace Prize, an alarm bell is ringing in Myanmar. In the villages of Arakan State, near the Bangladeshi border, a pogrom against a population of Muslims called the Rohingyas began in June. It is the ugly side of Myanmar’s democratic transition — a rotting of the flower, even as it seems to bloom.


Cruelty toward the Rohingyas is not new. They have faced torture, neglect and repression in the Buddhist-majority land since it achieved independence in 1948. Its constitution closes all options for Rohingyas to be citizens, on grounds that their ancestors didn’t live there when the land, once called Burma, came under British rule in the 19th century (a contention the Rohingyas dispute). Even now, as military rulers have begun to loosen their grip, there is no sign of change for the Rohingyas. Instead, the Burmese are trying to cast them out.

The current violence can be traced to the rape and killing in late May of a Buddhist woman, for which the police reportedly detained three Muslims. That was followed by mob attacks on Rohingyas and other Muslims that killed dozens of people. According to Amnesty International and Human Rights Watch, state security forces have now conducted mass arrests of Muslims; they destroyed thousands of homes, with the impact falling most heavily on the Rohingyas. Displaced Rohingyas have tried to flee across the Naf River to neighboring Bangladesh; some have died in the effort.

The Burmese media have cited early rioting by Rohingyas and have cast them as terrorists and traitors. In mid-June, in the name of stopping such violence, the government declared a state of emergency. But it has used its border security force to burn houses, kill men and evict Rohingyas from their villages. And on Thursday, President Thein Sein suggested that Myanmar could end the crisis by expelling all of its Rohingyas or by having the United Nations resettle them — a proposal that a United Nations official quickly rejected.

This is not sectarian violence; it is state-supported ethnic cleansing, and the nations of the world aren’t pressing Myanmar’s leaders to stop it. Even Ms. Aung San Suu Kyi has not spoken out.
In mid-June, after some Rohingyas fled by boat to villages in Bangladesh, they told horrifying stories to a team of journalists whom I accompanied to this city near the border. They said they had come under fire from a helicopter and that three of six boats were lost. Some children drowned during the four-day trip; others died of hunger. Once in Bangladesh, they said, the families faced deportation back to Myanmar. But some children who had become separated from their parents made their way to the houses of villagers for shelter; other children may even now be starving in hide-outs or have become prey for criminal networks. Border guards found an abandoned newborn on a boat; after receiving medical treatment, the infant was left in the temporary care of a local fisherman.

Why isn’t this pogrom arousing more international indignation? Certainly, Myanmar has become a destination for capital investment now that the United States, the European Union and Canada have accepted the government’s narrative of democratic transition and have largely lifted the economic sanctions they began applying after 1988 (measures that did not prevent China, India, South Korea, Thailand, Singapore and multinational oil companies from doing business with the Burmese). Still, when Secretary of State Hillary Rodham Clinton visited Myanmar late last year and welcomed its first steps toward democratization, she also set down conditions for strengthening ties, including an end to ethnic violence.

The plight of the Rohingyas begins with their statelessness — the denial of citizenship itself, for which Myanmar is directly responsible. Ms. Aung San Suu Kyi, though not as powerful as the military officers who control Myanmar’s transition, should not duck questions about the Rohingyas, as she has done while being feted in the West. Instead, she should be using her voice and her reputation to point out that citizenship is a basic right of all humans. On July 5, the secretary general of the Organization of Islamic Cooperation, Ekmeleddin Ihsanoglu, appealed to her to speak up to help end the violence.

To be sure, Bangladesh can do more. Its river border with Myanmar is unprotected; thousands of Rohingyas have been rowing or swimming it at night. But even though Bangladesh has sheltered such refugees in the past — hundreds of thousands of Rohingyas live here now, legally or illegally — it has been reluctant so far this year to welcome them, out of fear of encouraging an overwhelming new influx. Already, such fears have aroused anti-Rohingya sentiment among some Bangladeshis, and initially Bangladesh’s government tried to force the refugees back without assisting them. After some villagers risked arrest by sheltering refugees in their homes, the government began to offer humanitarian aid, before sending them back on their boats. Bangladesh should shelter the refugees as it has in years past, as the international community is urging.

But the world should be putting its spotlight on Myanmar. It should not so eagerly welcome democracy in a country that leaves thousands of stateless men and women floating in a river, their corpses washing up on its shores, after they have been reviled in, and driven from, a land in which their families have lived for centuries.

By Moshahida Sultana Ritu, economist, teacher at the University of Dhaka, in Bangladesh. International Herald Tribune