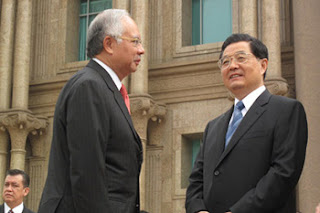 The failure of Malaysia to show any solidarity with the Philippines and Vietnam in the face of China’s aggressive moves in the South China Sea will come to haunt it. The ruling self-styled defenders of the Malay race, the United Malays National Organization (UMNO) are clearly far more concerned with short term advantage, political or pecuniary, than the principles at stake in the sea.

This week the four ASEAN nations facing China’s claims to almost the whole South China Sea – Philippines, Malaysia, Vietnam and Brunei – should be teaming up to confront Beijing, and urging fellow ASEAN members, notably Indonesia, to provide support. But in practice, while the ASEAN nations signed a collective agreement this week to spell out rules governing maritime rights and navigation in the South China Sea, it is likely to be toothless. Malaysia is burying its head in the sand and staying silent on the region’s most important long term issues. An UMNO source told Asia Sentinel recently that the government is determined to quietly tilt towards China, despite the fact that it carries on largely covert joint military training exercises with US Marines.

Nothing of course should surprise observers given the revelations of massive UMNO-linked corruption in the case of the French submarines that should be guarding Malaysian waters but in practice are just port-bound monuments to politicians’ greed. But the South China Sea is a far more serious case than the submarines because of the implications for vast areas of Malaysia’s Exclusive Economic Zone in the sea as well as its actual possession of some islets in the Spratly group.

Malaysia controls roughly one fifth of the South China Sea coastline, or one sixth if one excludes the southwest portion nearest to Peninsular Malaysia and Singapore which is not, as of now, subject to Chinese claims. China’s overall claim is imprecise because it has never been precisely delineated. It includes all the islets and shoals within the dotted line that constitutes its general claims area.

This line goes at least as close to the shores of Sabah and Sarawak as it does to the Philippines. Thus some of Malaysia’s current as well as future offshore oil and gas production within its EEZ is at least as vulnerable to China’s recent use of force as the Scarborough shoal, which lies just 130 miles off the coast of Luzon, or the waters due east of central Vietnam where China is offering exploration blocks which are clearly well within Vietnam’s EEZ.

China however is relatively smart. It may have upset some of its neighbors with its aggressive stance – a stance seemingly the result of domestic politics in China at a time of leadership transition and when the PLA is flexing its nationalist muscles. But it is not going to upset Malaysia just yet. It is easier to knock off the smaller but closer claimants one by one meanwhile taking full advantage of the greed and gullibility of Malay politicians.

Malaysia is trying hard to be on all sides at once. It is cosying up to China in the hope of investment and tourism but also in part reflecting the Mahathir-era preference for any country opposing western influence in the region.

Aside from the possibility of China buying influence along the French submarine lines, Malaysian policy seems influenced by two factors. Firstly, concerns that standing up to China on the South China Sea would encourage Beijing to interfere in domestic politics in support of the ethnic Chinese community. So a defense of narrow UMNO political interests is taking precedence over Malaysia’s national patrimony, which should belong to all its races and religions. And secondly, and perhaps not even consciously, the assumption that the waters off Sabah and Sarawak are somehow less part of the nation than those off the peninsula, the centre of political power and of Muslim supremacy. In turn that may reflect the inability of ethnic Malay Muslims to identify with the wider ethnic Malay world of predominantly Christian Philippines and even with predominantly Muslim but proudly multi-religious Indonesia.

The Malaysian Malay assumption that all Malays are Muslims and cannot be otherwise stands in the way of recognition of Malaysia’s pre-Islamic past. This was a past which left numerous now-ignored Hindu and Buddhist monuments as well as cultural symbols. As in neighbors Indonesia and Thailand, Indian script was applied to the local language. It was also a past of navigators who sailed the South China Sea and Indian Ocean before the Chinese.

But do not imagine that Malaysia’s current leaders care a toss about either the Malay past or the Malay future. They are content to focus on staying in office, lining their pockets and imposing Islamic intolerance at home. Asia Sentinel