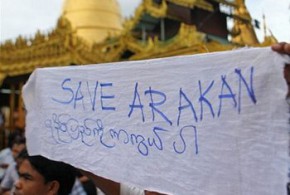 As society liberalizes after 60 years, new strains appear
The continuing strife in western Burma signifies a dangerous future for an ethnically diverse country that has experienced ethnic conflicts for more than 60 years. It is not simply a campaign against the minority Rohingya as a group. It is a reflection of a tragic political hangover of the nation-state system that operates through an ominous and troubling nationalism.

The Arakan conflict is about nation-state building and state territorialization, which are being articulated by mainstreaming a singular ethno-religious identity -- Buddhist Burmese, the basis of official nationalism. The root cause of the historical antagonism between the dominant Burman leadership and ethnic groups has been reactivated.

Politics of identity and difference

The first danger the anti-Rohingya campaign poses to ethnic harmony at the national level, not just at the Arakan (also known as Rakhine) state level, relates to the politics of identity and difference. Historically, ethnic Rakhine were antagonistic to ethnic Burmans for ‘destroying’ the Rakhine kingdom in the 18th century despite the fact that the majority of both ethnic groups were Theravada Buddhists. Nationalists now have mobilized Buddhist Burmans for their campaign against the Rohingya by presenting Arakan state as the western gate of Buddhist Burma against ‘flooding’ Muslims from Bangladesh.

As the anti-Rohingya campaign began to intensify in November 2011, Buddhism became the common ground for fostering an alliance between the Rakhine and Burmans. Discourses of anti-Rohingyas came to be constructed in term of protecting amyo barthar thartana -- race/nation and religion. Religion refers exclusively to Buddhism.

In this situation, the already unclear definition of amyo (race/nation), and the elements that constitute this category, further blur the boundary between ethnic Rakhine, Burmans and Burmese citizenry. But it takes the general categorical form of ‘Buddhist and/or Burmese’ where ‘Burmese’ generally refers both to the country’s citizens as well as the majority ethnic Bumans. They also blur the boundaries between Rohingyas, Islam and Burmese Muslims. Ethnic Burmans, with or without the Rakhines’ mobilization, joined the campaign in the name of “safeguarding the nation.”

Therefore, differences and historical antagonism between ethnic Rakhines and Burmans have temporarily faded into a common “Buddhist Burmese” identity vis-à-vis the Rohingya. This merger is obvious as the Burmese government as well as senior opposition leaders from Aung San Suu Kyi’s party including Tin Oo, Nyan Win and Win Tin jumped on the bandwagon to speak out against the Rohingyas. Well-known celebrities, scholars and well-respected writers agreed.

The supposed global champion of freedom and democracy, Aung San Suu Kyi, said during her Europe trip in June this year that she did not know if Rohingya were citizens of Burma. She did not even say one clear word that insults and deadly attacks on vulnerable Rohingyas must stop immediately.

Ko Ko Gyi, the leader of the 88 Generation Students, even denounced the Rohingya as a threat to national security. Likewise, Burmese freedom fighters and refugees in the West have openly campaigned against the Rohingya, arguing that denial of citizenship for them is the majority’s desire, however racist and exclusive, effectively turning democracy into mob rule. Some activists, just like the junta, claim that the Universal Declaration of Human Rights does not fit with Burma.

The Burmese media, especially the domestic journals, also launched a media war by supporting attacks and expulsion of the Rohingya from Arakan state – all in the name of protecting the nation.

The most disturbing statement came from President Thein Sein who told UN refugee agency officials that the Rohingya would be sent to camps and delivered to third countries as refugees. All these are a reflection that those who dominate Burma’s political and social lives express and engage in political actions based on deeply ingrained nationalist sentiment, however deadly and violent.

Geographical misconception of history and territory

Another important factor in the Arakan conflict is the public’s geographical imagination of national history and territory. For example, the title of a book written by a retired army officer, Thaung Wai Oo, is literally translated as We love [the land] because it is the inheritance from our forefathers. These words are also the lyrics of the national anthem. The book is about Thaung Wai Oo’s experience working with army officers who were deployed in counterinsurgency operations in various parts of the country.

It is odd that the author, being a Burmese military officer from the central plain of modern Burma, imagines ethnic territories beyond the plain as an inheritance from forefathers as if these ethnic territories have been part of modern Burma since time immemorial. Such a perception misses an important historical reality -- that modern Burma itself is very new. Today’s ethnic territories that appear on the national map as unified ethnic states were separate and relatively independent polities with distinct ethnic groups, cultural practices, and political histories.

It was only in 1947 when the rulers and leaders of these polities voluntarily attached their lands to “Burma Proper” [the lowland plain region in central Burma] to establish the Union of Burma. They were convinced by the promises of independence hero General Aung San and his forward-looking colleagues to join the Union on equal terms.

As General Aung San and his fellows were assassinated before independence, the Burmese nationalists also killed Aung San’s promises. The result is internal colonization. When the dictator Ne Win took over the country in 1962 in the name of protecting the nation from disintegration, he denied Aung San’s promises to ethnic peoples. Over time, Ne Win’s self-important textbook history convinced the public that they are indigenous to all the lands within the modern national borders, as imagined by Thaung Wai Oo.

The reality is that these ethnic states are not in any way the inheritance of Burman elites. They are lands historically, politically, and symbolically specific to ethnic minority groups. Failure to understand the historical geography of the nation has led the public to internalize Ne Win’s lies that ethnic groups demanding the fulfillment of Aung San’s promises are separatists and ‘rebels’. The Burmese term for insurgents ‘thaung gyan tu’ means rioters, looters and criminals – or a combination thereof.

In short, imagining the entire national territory as a singular entity and the land mass as that of the Burmese (whatever the term refers to exactly), and deeming the country a Buddhist nation led to inscribing the national space with singular ethno-religious identity, a common but problematic practice of nation-state building.

This predicament has results in burning churches, and beating and killing religious leaders in the Kachin, Chin, Karen and Karenni states and making the accusation that Christianity is encroaching on a Buddhist nation. In the ongoing Kachin conflict, churches have been turned into temporary military camps. Worse, Kachin News Agency reported in May 2012 that Burmese soldiers gang-raped an ethnic Kachin woman in a church.

The same logic applies to the Arakan conflict. Imagining the Arakan state as a unified territory in the west of Buddhist Burma, it is deemed to be an entirely Buddhist Burmese space. This completely disregards the fact that Arakan state is a combination of multiple territories inhabited by peoples with distinct cultures, religions and languages, just as in the Shan state where there are territories of the Wa, Kokant, etc.

Imagining a different reality in political centers far away from Arakan state, the Burmese disregard the reality that non-Buddhists, non-Burmese and non-Rakhine also have lived in different territories within Arakan state for centuries. Just as with all other borderlands in the world, peoples from both sides of the border move around in the Burma-Bangladesh borderland, known today as Arakan state. Having ‘illegal’ immigrants does not negate the reality that a segment of Muslims – whether they call themselves Rohingya or not – are indigenous to some territories in Arakan state.

This reality does not matter. The Burmese from political centers, alongside Rakhine nationalists, claim Muslims’ territories by means of wiping them out: Thein Sein’s plan, which is supported by the public. All these examples of state territorialization signify that internal colonization from the political centers is still the principle of politics in Burma.

The nationalist response to the Arakan conflict raises an important question of what this conflict means to the country’s broader ethnic relations. The Arakan conflict is testimony that the political mainstream continues to be nationalistic. Just like the state, mainstream oppositions stand up not for the principles of freedom, democracy and human rights, but for their own interests against power. They united against the Rohingya with complete disrespect for human life, dignity and human rights. Who would guarantee that they would not react to potential crises involving other minority groups just like the way they responded to the Rohingya?

This is a legitimate question especially because the mainstream political opposition has never taken the plight of ethnic peoples seriously. For the mainstream opposition, both at home and in exile, the problems are about the lack of democracy, human rights, and lately the ‘rule of law’.

According to them, ethnic affairs that consist of broken promises to ethnic groups, loss of territorial rights, human rights violations in ethnic states, cultural oppression, and a federal state based on equal political representation are not the primary concerns. Their fight for democracy has rather sidelined anything ‘ethnic’.

That is why the mainstream opposition has not taken any proactive stance against a decades-long history of deadly violence in ethnic states despite the military’s openly stated commitment to ‘wiping out’ all insurgent groups. As witnessed, the military’s attempt to ‘wipe out’ insurgent groups does not discriminate between insurgents and civilians, resulting in mass execution, torture, sexual violence and expulsion of people.

Even in a reformed Burma where people can speak freely, the mainstream opposition including Aung San Suu Kyi has not spoken out clearly against the Burmese military’s offensives and human rights violations in Kachin State. This is an indication that the mainstream political opposition is not on the same page as ethnic groups.

In such a political environment, bolstering Burmese nationalism, although in opposition to Rohingyas in the context of defining who belongs to the nation, reinforces the centrality of Buddhist Burmese in the political life, which automatically further relegates the position of minorities to oblivion.

The Arakan conflict demonstrates that the political mainstream can be easy prey if nationalism is exploited. This is even disconcerting as those who dominate political stage, the media, the youth, celebrities etc. are all prepared to not only speak the language of oppressors but also to act with them in the name of race/national and religion or national security.

If the government frames a potential conflict with an ethnic group just as the Arakan conflict was framed along nationalist lines, who will guarantee that the majority with the tools of power would be fair? Who would guarantee that they would not band together and parade behind the military against those they deem to be the nation’s enemies, as plotted by the government’s sick drama via discourses of amyo barthar thartanar?

Until the mainstream Burmese stand up for the principles of freedom and human rights including enfranchisement of the minorities, the ethnic minorities are vulnerable. Until the people realize that modern Burma as a nation-state is not homogenous, but composed of territories with diverse cultures and religions, internal colonization and conflict will ensue. Asia Sentinel

(By Sai Latt PhD candidate in the Department of Geography at Simon Fraser University in Canada.)