Thailand’s war without an audience 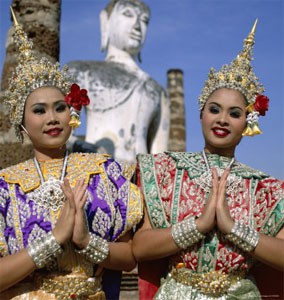 How a deadly insurgency stays beneath our radar

Along the beachfronts of Thailand’s west coast, towering multimillion-dollar luxury hotels compete for space with pastel mansions overlooking the warm, turquoise Indian Ocean. Range Rovers and Mercedes cruise the resort’s nightlife strip, booming techno and rap and stopping to pick up partiers headed for discos and high-end bars. Farther north sprawl golf courses hemmed in by luxury gated communities. Tourists from Japan, Germany, England, the United States, Australia, and many other countries head down narrow roads to the water, where masseuses trawl for customers and beachside bars serve up beers and Johnnie Walker.

Yet just 200 miles away from this lush, wealthy scene, in a more rural part of the country, a far different daily routine is taking place. Most days, before the sun even sets, violence will shatter any sense of calm. Armed insurgents blow massive holes in the roads with IEDs. When the insurgents seize officials, teachers, or even ordinary rubber plantation workers believed to have sympathies with the national government, they behead them and leave their decapitated bodies in public places. They warn residents to obey a strict form of Islam and not to cooperate with the government. Fighters storm buses and strafe them with gunfire, killing young children, and firebomb primary schools, leaving charred remains and prompting schoolteachers to pack pistols in the classroom.

Meanwhile, the government’s security forces stop cars and buses, frisk citizens, and frequently simply abduct local suspects and torture or kill them, according to reports by human rights organizations. In one attack by the security forces, hundreds of local men were rounded up and packed them into airless, sweltering vans; by the time the men had reached police custody, at least 80 had suffocated.

At night, after dusk comes, shopkeepers close their stores and markets, and the province’s towns go dead quiet. Businesses, even hospitals, that do stay open after dusk employ heavily armed guards. Although a handful of foreign tourists used to make their way down to this once-idyllic rural area, for a taste of more authentic local curries and to search out the most undeveloped white sand beaches, it is now extremely rare to see a Westerner on the street.

While Thailand—including the west coast and the modern, high-rise capital of Bangkok—attracts more than 10 million tourists per year, the nation’s deep south is home to a longstanding conflict between local Islamic rebels and the Buddhist-dominated Thai security forces that now stands as one of the deadliest insurgencies in Asia. Some 5,000 people have been killed over the past decade, and tens of thousands been injured or made homeless; both sides have been accused of using child soldiers, according to a recent report in Global Post. The conflict has driven hundreds of thousands of Buddhists out of the deep south, and has made the school system in the region virtually nonfunctional, since the insurgents target teachers and have firebombed numerous schools. Teachers in the south say that the conflict has destroyed an entire generation of children.

One might think such a violent insurgency, so close to an international capital and a tourist center, would attract global attention and enormous media coverage. In fact, though, the conflict in the Thai south has for years been almost invisible. Though Thailand is a country woven into the world economy by trade and tourism, and though this strife is going on only a few hours’ drive from Phuket’s major international airport, there are only sporadic reports of the insurgency in the news within Thailand, and even less in the international press. Indeed, the conflict attracts little attention in policy circles in Washington, most Asian capitals, and even among many policy makers in Bangkok.

If you wonder why some tragedies—even the worst—go all but ignored for years, the southern Thailand conflict, so near to some of the fanciest beach resorts in the world yet essentially invisible to outsiders, almost perfectly illustrates the blind spots in the world’s response to violence.
***
Thailand’s southern provinces lie along the border of Malaysia, and have a population distinct from the rest of Thailand—most residents speak a dialect of Malay, practice Islam, and look toward Malaysia and Indonesia for cultural influence. These three provinces were, until the early 20th century, part of a sultanate. But in the early 20th century, the Bangkok monarchy—a Buddhist power—gained control of the region, triggering local anger against what the residents viewed as a foreign grip. In the 1960s and 1970s, as antigovernment protest simmered in other parts of Thailand, and insurgencies raged through­out Southeast Asia, a separatist insurgency emerged in southern Thailand as well. The death toll was relatively low, however, and most of the insurgents put aside their weapons in the 1980s following an amnesty from the national government.

To this day, no one really knows why the insurgency reemerged in the early 2000s, and why the conflict was so much more violent when it erupted again. But when it did, it contained an almost perfect recipe for a conflict that would be both horrifying and ignored.

For one thing, the insurgency appears to be decentralized, with few publicly declared goals. A study by Human Rights Watch that interviewed local residents throughout the south suggested that the insurgents are looking to drive Thai Buddhists out of the region and discredit local governmental authorities, as well as possibly pushing for more use of local languages, stricter forms of Islam, and ultimately autonomy or a separate state. But no one leader has emerged at the head of the insurgency, and experts who have interviewed many insurgents, like Don Pathan of The Nation newspaper in Bangkok, say the insurgent cells are diffuse and often disconnected—angry young men without one central leader. Some insurgents issue warnings and demands to locals in the south and the Thai government, often through leaflets left on cars or in public places, but no one knows how much of the insurgency they speak for.

“The lack of a defined enemy makes reporting on and understanding the conflict difficult,” says Duncan McCargo of the University of Leeds in the United Kingdom, an expert on the Thai south. By contrast, other conflicts that may be even more remote from Westerners—such as the long-lasting insurgency in Uganda—may have one brutal and charismatic leader, such as Joseph Kony of the Lord’s Resistance Army, who makes a figure easy for outsiders to understand and vilify.

Also, the southern Thailand conflict doesn’t map onto conflicts that preoccupy America and other Western powers. Shortly after 9/11, some Western terrorism experts attempted to link the southern insurgents to Al Qaeda. When no real links emerged, it became harder for academics and other experts to find funding from donors to do research on the south, according to several Thai analysts who study the region. The southern insurgents have also apparently chosen not to target Westerners or Western interests, even though resorts like Krabi and Phuket are not far away. Meanwhile, the few experts on Thailand in the West have been primarily focused on the dramatic, if much less deadly, political conflict in Bangkok and the center of the country.

Southern Thais also lack large exile communities who could publicize the conflict in the West, the way East Timorese emigrants in Australia, Portugal, and the United States helped keep their tiny island on the radar of policy makers throughout its armed conflict with the Indonesian government.
And southern Thailand sharply highlights the problems of reporting from conflict zones, especially given the tight foreign-reporting budgets of even major broadcast and print outlets. The Thai press, dominated by Bangkok-based Buddhists, has tended to view Malay Muslim southerners with bias. Foreign reporters trying to cover southern Thailand face high hurdles: Thai is a challenging language that uses a non-Roman alphabet; in the deep south, many people do not even speak it, using their Malay dialect instead. The relatively few foreign reporters trying to cover the region are highly dependent on local reporters or stringers, who are often amateurs, and may be too personally affected by the conflict to collect information impartially. Slow Internet access in the Thai deep south means that residents generate few of the cellphone videos and social-media reports that can spread word of modern conflicts.

The insurgency in southern Thailand may be an extreme case, but it is hardly the only situation where this mix of inaccessible territory and opaque politics has rendered a violent conflict nearly invisible. A brutal ethnic conflict in the eastern Congo, which over the years has claimed the lives of millions and drawn in forces from neighboring nations, has been largely ignored by the outside world for similar reasons. So has a violent separatist movement in Indonesia, located on the western half of the island of Papua New Guinea.

For the same reasons these conflicts are hard to cover, they are hard to solve. When the insurgencies have no one leader and no one coherent platform of demands that could be addressed, they tend to be passed over by governments and agencies that, understandably, would rather spend their money and energy elsewhere. (Thai government officials I have interviewed privately admit that there seems to be no end in sight to the conflict.)

But to ignore such conflicts is also to condemn the people embroiled in them. In southern Thailand, as difficult as the conflict is, there is still impressive work being done by some aid groups to bring its violence to light. The International Crisis Group, for example, a leading global research organization, has continued to put out thorough and insightful reports on the south Thailand insurgency.

It is easy to imagine that there’s no longer such a thing as an invisible tragedy—that the Internet, immigration and travel, and a globalized media quickly bring every conflict to our living rooms. The Thai insurgency is a reminder that we can’t take that visibility for granted. Sometimes there is simply no substitute for being there, and doing the hard work of reminding people that a conflict is happening. After all, if brutal, seemingly endless violence can erupt just a few hundred miles from one of the world’s party palaces, and almost no one takes notice, where else could such bloodshed go completely ignored?


By Joshua Kurlantzick fellow for Southeast Asia at the Council on Foreign Relations.
Posted by Kerry B. Collison at 4:31 PM