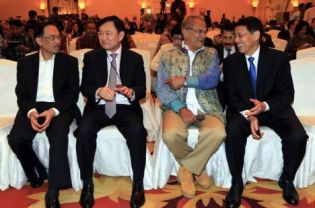 From left, Malaysian opposition leader Anwar Ibrahim, former Thai Prime Minister Thaksin Shinawatra, former East Timorese President Jose Ramos Horta and former Indonesian Foreign Affairs Minister Hassan Wirajuda attended a forum in Jakarta on Tuesday. (EPA Photo/Bagus Indhono)
One man barely survived an assassination attempt. Another was severely beaten and imprisoned for six years on spurious charges. The third was ousted from power by a military coup and forced into exile because his opponents could not defeat him democratically.

These three men — Jose Ramos-Horta, the former president of East Timor; Anwar Ibrahim, the Malaysian opposition leader; and Thailand’s former prime minister, Thaksin Shinawatra — appeared on the same stage in Jakarta this week for a forum on reconciliation put together by Strategic Review, a quarterly journal of policy and ideas published in Jakarta. It is my pleasure to be associated with Strategic Review and to have had the chance to meet all three of these leaders.

The forum on Tuesday, which was opened with a keynote address by President Susilo Bambang Yudhoyono, made for a stunning photo op of the three invited leaders speaking their minds quite openly during an event that could never happen back home for two of them, Thaksin and Anwar.

Indeed, this was political theater of a very high order. Having been hauled into court repeatedly on the most spurious of sexual charges, Anwar is looking toward a general election later this year as he tries to unseat the coalition that has governed Malaysia since independence.

The billionaire Thaksin is involved in his own high-stakes gambit. With his sister now prime minister, he is betting that he can one day return to Thailand despite the intractable opposition of powerful military and political figures.

But along with Horta, these three men all brought a message of forgiveness to Jakarta. Anwar praised Indonesia for its ability to “not be saddled by the baggage of the past.” He resisted the urge to call for payback and appealed instead for Malaysia to simply allow fair elections as the path to reconciliation.

“I am only able to forgive,” Anwar said from the stage, “and move on. Not necessarily forget, but move on. If you are totally committed to [democracy], you don’t have time for retribution.”

Thaksin spoke of the need for calm in handling the political crisis in his country. “I think we need truth, but the truth must not lead to future conflict,” he said. “We must learn from our past failures, but we also must move on.”

The best example was Ramos-Horta, who has actually done what the other two are so far only talking about. In 2008, while president, he pardoned the men who attacked him. He noted that after the 1999 independence referendum and the bloody withdrawal of the Indonesian military, he and independence fighter Xanana Gusmao made peace with Indonesia a first priority despite calls for an international tribunal to investigate the crimes committed in East Timor. “I said 10 years ago that Indonesians will be the ones who look into their souls and find solutions,” he said, adding that he prefers “restorative justice. Sometimes we have to swallow this desire for retributive justice.”

Outsiders often chafe at the tendency in Southeast Asia to paper over deep-seated conflicts. But the path of reconciliation, as frustrating as it can be, makes sense. Would Indonesia be better off today if there had been a genuine attempt to settle the scores left behind by the New Order era? It is unlikely. Similarly, there is enormous potential for chaos in Myanmar should popular anger be unleashed against the long-ruling generals. It is to the credit of Aung San Suu Kyi that she is negotiating a way forward.

I hope the message of forgiveness and reason that was expressed on the stage in Jakarta this week will be realized in both Malaysia and Thailand, and that Thaksin and Anwar prove to be men of their word should they rise to power.

It has worked here and in East Timor; it is starting to bear fruit in Myanmar. In the words of President Yudhoyono during his address to the forum: “There is no peace, no freedom, no stability unless we take out the cancerous seeds of conflict and hatred from our society and replace them with seeds of amity and good will.”

A. Lin Neumann, founding editor of the Jakarta Globe, is the host of the “Insight Indonesia” talk show on BeritaSatu TV. He is also the publisher of Strategic Review.