Should Indonesia’s Military be given the Right to Vote in Elections? 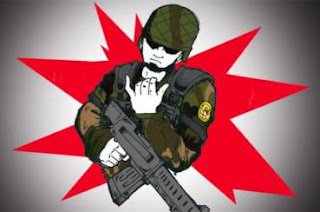 The classic controversy over voting rights for the Armed Forces and the National Police is back on the agenda. This time, it was triggered by something President Susilo Bambang Yudhoyono told 836 cadets from the Army, Navy, Air Force and National Police during a July 11 graduation ceremony at the National Military Academy in Magelang, Central Java.

Yudhoyono said the time was not yet right for the country’s security forces to have voting rights in elections. If the Armed Forces (TNI) had the right to vote in 2014, he worried, it would lead to disunity among soldiers.

However, Yudhoyono also said that one day, when the political system was better established and more mature, when democracy was really consolidated, political awareness was higher and there was no longer any conflict, it would not be a problem for members of the TNI and the National Police to receive the right to vote.

This is not the first time the issue has come under debate. Before the general elections in 2004 and 2009, the issue was also discussed.

On one side, some people worried that letting soldiers vote would plunge the military back into the arena of practical politics, dividing soldiers and officers according to their political affiliations or giving rise to military institutions that defended the interests of political parties.

Others have been more open to the idea of voting rights — eventually, but not yet. This camp holds that right now, the low salaries in the military could inspire soldiers and officers to get involved in delivering votes in exchange for money. The country’s democracy is still in the process of consolidation, they reason, and voting rights would give the TNI the opportunity to participate in practical politics. This line of thought is becoming the basis of Yudhoyono’s own position.

Historically, however, the TNI has become politicized not during elections but during periods of disharmony between central and local forces, such as when some regional commanders opposed the military command in Jakarta during the early days of independence.

The TNI was also involved in politics during the so-called Guided Democracy era, which was marked by friction between the three main political forces of former President Sukarno, the Army and the Indonesian Communist Party (PKI).

This involvement in politics continued into the New Order era under former President Suharto, especially with the dual- function doctrine. Though soldiers could not participate in general elections, the military received free seats in the People’s Consultative Assembly, the House of Representatives and regional legislative councils. Since then, the idea of TNI voting rights has been a matter of much debate.

From a democratic perspective, all citizens should have the right to vote, including members of the military. Prohibiting soldiers and officers from voting in general elections can be seen as a violation of their political rights, and therefore, the public has a right to criticize it.

Since the TNI was founded on Oct. 5, 1945, it has been involved in Indonesia’s social, political and economic spheres. Military dominance encouraged praetorian attitudes among TNI members, who believed they were best able to interpret the interests of the people and who saw themselves as guardians of the state.

The reform movement that swept over the country in 1998 required the TNI to engage in a series of internal reforms to ensure the military institution respected the democratic process and stayed out of practical politics. The TNI and the National Police were required to withdraw their representatives from the House. If military members wanted to run for public office, they would have to resign from the military.

I believe voting rights could actually accelerate the TNI’s internal reforms, allowing defense and security institutions to better integrate with civilian elements. The TNI as an institution is not allowed to participate in practical politics, and that doesn’t have to be changed, but that doesn’t mean we have to prevent individual members of the TNI from voting in general elections.

Psychologically, voting rights would encourage TNI members to take more responsibility for Indonesia’s democracy. They would realize that their highest duty is to protect this democracy, and as a result they would not be easily mobilized to support a certain political party.

When it comes to voting rights for the military, the crucial step would be periodic democratic education for all TNI members. To this end, certain resources would have to be prepared, including civilian teachers who were competent in both military and political issues. This education, not the prohibition of voting rights, is the urgent strategic step we should take regarding the military’s role in the country’s democratic consolidation.

It’s understandable that some people worry that letting soldiers vote would bring military institutions back into the arena of practical politics. But even so, that’s no justification to politically discriminate against members of the TNI.

Bawono Kumoro is a political researcher at the Habibie Center in Jakarta.