Indonesia and Australia: the great power next door 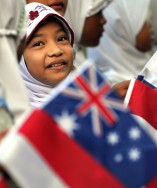 When a single unified state emerged as the successor to the Netherlands East Indies after 1945, Australia suddenly had a close neighbour that it would one day have to take seriously.

Yet for a long time that potential was largely unrealised. Australians therefore became used to the idea of Indonesia as a large but weak neighbour, and as no rival to Australia’s position as the strongest country in its neighbourhood. This image of Australia in relation to Indonesia became even more entrenched after John Howard replaced Paul Keating as prime minister in 1996.

In all this Australians have missed two big stories. The first is Indonesia’s remarkable transition to democracy; most still see Indonesia as little changed from the time of Suharto’s New Order. This leads them to underestimate both the potential of the relationship and the risks that arise from the fragile and still incomplete transformation of Indonesia’s political system.

The second is the biggest story of all: Indonesia’s economy. Indonesia’s GDP has already overtaken Australia’s, but that is just the beginning. A Citibank study published earlier this year projected Indonesia’s GDP in 2040 at US$8.27 trillion, which they say by then would make it the fourth-largest economy in the world. Others are a little less bullish, but the underlying trend is unmistakable: well before mid-century Indonesia’s economy will most probably be twice as large as Australia’s and possibly much larger still.

Shifts in relative wealth on this scale change everything. If wealth is power, and if power is fundamental to relationships, then Australia’s relationship with Indonesia is bound to change fundamentally as Indonesia grows so much richer than Australia. This will be new and unwelcome for a country that has never had a richer and more powerful neighbour before — and so far the response has been denial.

A consequence is that very little thinking is being done about the kind of relationship Australia should aim to have with Indonesia when it becomes a great power, and what can be done now to start building it. Instead, Canberra’s approach to the relationship is focused on third-order issues of little long-term significance, like people smuggling and live cattle exports.

The result is a relationship that is dangerously fragile. The clearest warning of this came in Indonesian President Susilo Bambang Yudhoyono’s remarkable speech to the Australian Parliament in March 2010, in which he spoke very frankly about the misunderstandings and mistrust between the two countries. The fact that his warnings received little attention just reinforces how little Australia understands Indonesia’s importance.

It also shows how seriously Australia has wasted the opportunity of Yudhoyono’s presidency to set the relationship on firmer foundations. Australia is unlikely to ever again have an Indonesian president so well disposed to it. And time is not on Australia’s side. The more powerful Indonesia becomes, the bigger the shock for Australia when it discovers it can no longer set the terms of the relationship.

Take the shift in military power and strategic weight as an example.

For a long time, while Indonesia’s economy remained much smaller than Australia’s, and its security concerns remained inwardly focused, Indonesia had little money to spare for air and naval forces, and little need for them as long as US primacy in Asia remained uncontested. It has therefore never built the maritime forces without which an archipelagic nation can exercise little strategic weight. Australia, on the other hand, spent relatively large sums on maritime forces, making it for many years the most capable air and naval power south of China and east of India.

Over the next few decades this is very likely to change. As its economy grows Indonesia will have more money to spend on increasing its air and naval forces, and it will have more need for them as Asia’s old US-led order is challenged by China. This could be bad news for Australia because it will increase Indonesia’s weight as an adversary.

But it could also be good news because it will increase Indonesia’s weight as an ally. Most Australians find it impossible to see Indonesia in this light, but the simple facts of geography mean that against any threat from the existing great powers of Asia, a strong Indonesia would be Australia’s greatest strategic asset. If, as is clearly possible, the US plays a smaller role in Asia as the Asian Century progresses, there is a real chance that Indonesia could become Australia’s most important strategic partner. This was Paul Keating’s insight when he sought a security treaty with Jakarta during his prime ministership.

Unlike Keating, most Australians have little understanding of the role of power in international relations, because until now the power has always been on their side: Australia has been far stronger than its close neighbours, and its close allies have been far stronger than anyone else. In the Asian Century this will no longer be true. Adjusting to that fact is going to be one of the biggest challenges Australians have ever faced, and they have hardly begun.

Hugh White is Professor of Strategic Studies at the College of Asia and the Pacific, the Australian National University. He is an EAF Distinguished Fellow for 2012. East Asia Forum