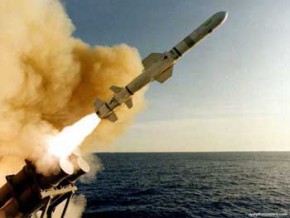 China and Indonesia have started talks on the ambitious local production of C-705 anti-ship missiles
as part of Indonesia’s efforts to achieve independence in weapons production.

The defense cooperation reflects strengthening ties between both countries amid heightening tension in the South China Sea involving China and a number of Indonesia’s ASEAN neighbors.

“The meeting discussed various efforts to improve cooperation between the defense industries of both countries,” Hartind said on Thursday. “We’ve already prepared an area for the [missile] production site that faces the open sea for trials.”

He said that the Indonesian Navy had successfully test-fired the C-705 missiles in the Sunda Strait.

“China has also offered to donate weapons systems that Indonesia might need,” he added.

A source said that Indonesia was expected to reply to Phase 1 of the missile proposal at the end of August and Phase 2 one month later. A contract is expected to be signed in 2013.

A proposal for a Phase 3 on research and development is already on the table although the focus is currently on the first two phases.

China has also offered to train 10 pilots from the Indonesian Air Force to train using a Sukhoi simulator in China.

“However, it will take a long time for us to be independent in the defense industry, perhaps after 2024. This is the reason Indonesia builds partnerships with many countries that possess modern military technologies,” he said. “This is also why we require partner countries to transfer their technologies to us in any agreement we sign with them.”

Andi added that there were two goals in terms of the partnership: to access advanced rocket technology, and to collaborate in upholding maritime security, which began when President Susilo Bambang Yudhoyono signed an agreement in March during a state visit to Beijing.

“I don’t believe it has anything to do with conflicts in the South China Sea,” he stressed.

Meanwhile, chairman of the House of Representatives’ Commission I on defense issues, Mahfudz Shiddiq, said such global partnerships in the defense industry were designed to develop Indonesia’s own industry.

“We have allocated Rp 150 trillion [US$15.8 billion] to modernize our weapons-defense system from 2010 to 2014. It would be wasteful paying such a huge amount to foreign defense industries without any attempt to improve our own,” he said.

“Therefore, we require partner countries to transfer their military technologies in the hope that they will gradually improve our own technologies.”

He added that the partnership with China was due to its advanced military technologies in fields such as rocketry. “This is not political, even though others might link the partnership to political issues, for example the South China Sea disputes,” Machfudz said.

Indonesia already cooperates on weapons production with several other countries including South Korea to build jet fighters and submarines, the Netherlands to build frigates and Spain to build medium transport aircraft.