How can we stop boat people? Look to the source 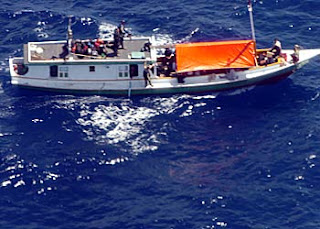 The notion that some sort of political or strategic deal with Indonesia will stem the flow of persons seeking to come to Australia by boat is fanciful.

There are several reasons for this: the very large number of persons seeking relocation to somewhere better than where they are now; the sometime decades-long wait to gain legitimate entry to desirable destinations (such as the United States, continental Europe, Britain, Canada and Australia); the well-organised and affordable criminal networks that facilitate people smuggling; the inability or unwillingness of transit countries to interdict the flow; the money made from the flow by corrupt officials and corrupt agencies; the unpreparedness of other countries to take the travellers; the difficulty of gaining access by air to desirable destination countries; and, possibly, the perception that some countries (such as Australia) are a soft touch.

According to the United Nations Higher Commissioner for Refugees, the main source countries last year were Afghanistan, at 2,664,400 refugees, and Iraq at 1,428,300.

These are, coincidentally, the two countries where Australian forces have been part of a US-led military coalition to effect regime change after September 11, 2001.

Rather than declining, the flow to Australia is likely to increase as the security situation in some source countries deteriorates, and the US, the European Union and Britain put up the shutters and make it harder for foreigners to gain access there.

The main holding countries for refugees were Pakistan, with 1,702,700, and Iran, with 886,500. These numbers only reflect those registered with the UNHCR; there may be double that number of displaced persons who have not registered.

While the statistics do not show ethnicity, the likelihood is that most of those seeking to leave Pakistan, Iran and Afghanistan for Australia are Hazaras. There are now about 50,000 Hazaras in Australia. The Hazaras are a Persian-speaking people who mainly live in central Afghanistan and Pakistan. They are overwhelmingly Shiite Muslims and comprise the third largest ethnic group of Afghanistan, forming 9 per cent of the total population at about 3 million. Over half a million Hazaras reside permanently in neighbouring Pakistan, and a similar number in Iran.

In majority Sunni countries, Hazaras are commonly persecuted for their beliefs, but are also reported to be badly treated in Iran (a majority Shiite country). In Afghanistan, there were large scale massacres of Hazaras by the Pashtun Taliban when they were in power before 2001, and the prospect of a return to Taliban control in the south and east after 2014 will inevitably drive more Hazaras into Pakistan and Iran.

They will not be welcome in either country, particularly Pakistan, where the Hazara ethnic minority has faced discrimination for at least a century.

Violence against Hazaras has risen sharply since September 11, 2001, with more than 800 Hazaras killed in suicide attacks or targeted shootings. To date, no one has been arrested for these killings.
Sri Lanka will remain a significant boat people source country because of ongoing discrimination against the Tamil population by the Sinhalese-dominated government. It is hard to judge how many Sri Lankan Tamils will try to make the journey, but the numbers could decrease as the Sri Lankan authorities make it harder for them to leave. Most Sri Lankan Tamils are likely to come either by boat direct, or via Malaysia and Indonesia. The Tamil diaspora in Australia probably number about 30,000.

As a resident immigrant population increases in size and resources, it creates a pull factor for more members of that group to come by boat as the residents are able to pay people smugglers to fast-track their relatives.

What can be done to get people off the boats? Some options could include: taking more people from refugee camps direct, and discouraging the people smuggler option; returning boat arrivals to source countries (complicated if they have destroyed documentation); allowing more in by air following offshore processing; buying up and destroying surplus boats in Indonesia; holding unauthorised arrivals for long periods in detention centres; encouraging or subsidising transit countries to keep them; proactively going after people smugglers; nominating where in Australia they must live for a set period; encouraging them to stay where they are by improving local conditions, and/or; encouraging them to go somewhere else, other than Australia.

However, the reality is that we need to manage the process humanely and accept the most deserving cases, while avoiding being swamped by numbers and growing demand. Australian politicians have tried to duck the issue, but if they seriously want to reduce the boats coming to Australia the places to start are the source and holding countries.

High-profile political deals with Indonesia and Malaysia are unlikely to discourage the people smugglers, or their hopeful clients. Indonesia's borders are particularly porous and I doubt Indonesia would be able to stem the flow, even if it wanted to.

Last year, Australia took in 21,805 refugees, while last financial year Australia's total migration and humanitarian intake was 182,500 people. Of these, 92 per cent came from the migration program. This is another issue that should be addressed by our politicians: that is, should more of our intake be refugees, and should we increase - or even reduce - the total number of migrants we admit each year?