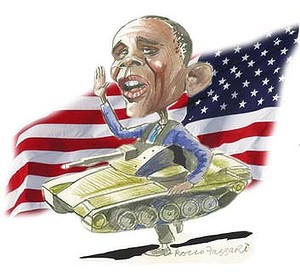 What a time for Canberra to cut defence spending, just as the neighbourhood is arming itself to the hilt.

t was only seven months ago that Barack Obama and Julia Gillard stood together to jubilantly announce a permanent new deployment of US Marines to Darwin.


It was the biggest permanent shift of US forces in peacetime into the Asia-Pacific since the Vietnam War. "The United States is a Pacific power, and we are here to stay," Obama declared to the Australian Parliament.

It was the most visible evidence of US commitment to the security of Australia since World War II.
And it was Australia's emphatic answer to a question that has been debated intensively in its policy community for over a decade - in the event of a crisis between the current superpower and the rising one, which side would Australia choose? 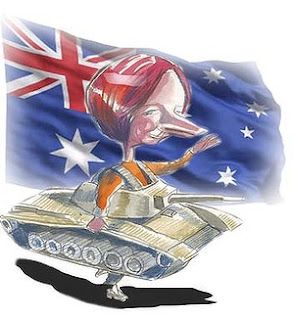 It was also only seven months ago that the US President stood in the Australian Parliament and boldly predicted the downfall of the Chinese Communist Party, to the enthralled applause of government and opposition alike.

It was a heady moment. But when the speechwriters stood down, the budget cutters stepped up.
In the months since, the warm glow of alliance bonhomie has given way to the colder calculations of the defence budgets of both Australia and its great and powerful friend.

Events in Canberra and Washington raise serious questions about the ability of the alliance partners to give effect to their grand pledges to each other.

On the Australian side, it is stunningly clear what's happened. The Gillard government has chosen to reduce Australia's defence effort to its feeblest in 74 years.

The May budget cut the national defence outlay from the equivalent of 1.8 per cent of gross domestic product to 1.56 per cent. This is its smallest since 1938, the year before the outbreak of World War II, according to the Australian Strategic Policy Institute.

The government announced cuts of $5.5 billion over four years. It was a reduction of 10.5 per cent and the sharpest cutback since the Korean War ended in 1953.

Why? The government was driven by its commitment to return the budget to surplus this fiscal year, which ends on June 30, 2013.

But in reaching that goal, it cut defence harder than any other portfolio. The government weighed its priorities, and defence came in at the bottom.

There were some sensible elements in the cuts. For instance, one is a delay in payments for delivery of the US Joint Strike Fighter because of American delays in building the planes themselves.

But the Gillard government is not merely conducting prudent housekeeping, as it claims. This is essentially a matter of political choice. The Australian Strategic Policy Institute's Andrew Davies says ''the cuts are very simply budgetary'', though they are veiled in talk of strategy. The cutbacks threaten the central capacity of Australia to defend itself.

Professor Alan Dupont of the University NSW and a former analyst with the Defence Department put it this way: "The best time to invade Australia will be around 2028-30. That's a serious comment.'' Dupont says at the moment it's touch and go whether we will have any subs to deploy because there's been so much delay in the process of starting work on the replacements for the existing submarine fleet, the decrepit Collins-class subs.

Australia has six submarines, but can field only one at any given time, and perhaps two in an emergency. Chronic problems of maintenance and crewing have turned the national fleet into a floating joke.
When the government announced its 2009 plan to modernise defence, Force 2030, it promised 12 new, highly capable submarines to replace the Collins Class. But in the budget this year, Julia Gillard and her Defence Minister, Stephen Smith, said that they were commissioning a fresh study, at a cost of $214 million, to further examine how these might be built.

"We're having more reviews of the submarines announced in 2009,'' says Dupont. ''It begs the question - what's the government been doing for the last three years?''

The Australian Strategic Policy Institute can answer that question. Since 2009, Gillard and Smith have announced defence cuts, deferrals and spending avoided totalling nearly $25 billion, according to ASPI. That's the equivalent of the entire defence budget for a year. ASPI, a government-funded think tank respected for its expertise and credibility, described the defence budget as an "unsustainable mess".

That might be a rational course if the risks to Australia were diminishing. They are not. The Asia-Pacific is in the midst of an arms build-up of historic proportions.

This year, as Australia announced cuts of 10.5 per cent to military spending, China announced an increase of 11 per cent.

China's defence outlays have doubled in the past five years and Indonesia's have trebled. For the first time since the Industrial Revolution, Asia is on the cusp of spending more on its militaries than Europe, the International Institute for Strategic Studies in London points out.

"China has amassed considerable economic power over the last few years," says Ernest Bower, the south-east Asia expert at the Centre for Strategic and International Studies in Washington. "It believes it has the leverage now, and it's testing it."

In other words, a rising power is seeing what it can get away with.

The South China Sea is highly prospective in oil and gas. On some estimates, it rivals Saudi Arabia as the hydrocarbon centre of the world.

China broadcasts a policy of peace, but opportunistically intimidates, threatens and coerces weaker countries. Its recent standoff with the Philippines over claims to the Scarborough Shoal is the latest illustration. The Philippines sent a naval vessel to confront Chinese fishing boats in contested waters in a standoff that continued until a hurricane intervened.

It's an unequal contest. "When the Chinese do this, they generally have a surface combat group just over the horizon, the big stick," says Mike Green, the top Asia official in the Bush White House. "That's very aggressive."

And the Philippine navy's biggest vessels are a pair of retired US coast guard cutters. "They're so old that my grandfather served on one of them," says Green. "They can barely keep them on the ocean."

It is a time of rising risk of war, even if only by accident. As the Obama White House's top Asia official, Danny Russell, told the Herald this week: "China and the Philippines found themselves in a difficult situation, facing pressure not to back down, and the zero-sum challenge of competing territorial claims threatened to escalate tension."

This created "a scenario of grave concern to all countries in the region". The effect was to "underscore the perennial risk in international affairs that one thing can lead to another".

But despite the mounting tension, Gillard and Smith calculated that they could get away with running down the Australian defence effort, no doubt, because the Australian public was uninterested and the Abbott opposition was inert.

But the US noticed. The Obama administration has raised its concerns with the Gillard government repeatedly, at multiple levels, in recent weeks. A senior official of the Bush administration, not constrained by the niceties of diplomacy, said publicly this week what the Obama officials feel constrained to say privately. ''Australia's defence budget is inadequate,'' said Richard Armitage, former deputy secretary of state.

"It's about Australia's ability to work as an ally of the US. I would say you've got to look at 2 per cent of GDP,'' which implies an extra $6 billion in spending annually. Planned spending is $24 billion this year. "A large island nation like Australia, rich in resources, needs a robust military capability."

And the Abbott opposition has noticed too. Gillard has given the opposition a tremendous opportunity to exploit. The Coalition has criticised the defence cuts, but sotto voce so far. The opposition is constrained by its own problems in working out a fiscal policy and is considering its options.

But the US itself is cutting defence spending. Under pressure of its burgeoning national debt, the US has announced $500 billion in cuts over the next 10 years. Nonetheless, it will still spend a robust 3.5 per cent of GDP on defence this year.

But the pressure on the US defence budget may be only just beginning. When Congress last year was unable to agree on a long-term plan to cut the national debt, it set up a pressure point for itself in the future.

That pressure point is known formally as budget sequestration, but informally it's called the "fiscal cliff". As in, the US will fall off the cliff unless Congress can strike a deal. And the future is the end of this year. You'll be hearing a lot about the fiscal cliff in the five months ahead as the Republicans and Democrats argue furiously about how to avoid it.

If they don't? The inbuilt mechanism already fixed in law prescribed mandatory cuts of $1.4 trillion to spending. Of this, $500 billion is to come from defence.

It would be madness to allow this to happen. The chairman of the Federal Reserve has said that, if it were to fall off the cliff, the US would probably be "knocked back into recession." Somewhere between a million and 2 million Americans would lose their jobs. And the defence implications would be serious.

"It would mean a fundamental re-evaluation," says a Pentagon official with responsibility for Asia policy, Vikram Singh. "It would be extremely painful," he told the Herald this week.
And what are the chances of this madness actually happening? A congressional official who is central to the process said: "The fiscal cliff? We're going to go right over it."

Peter Hartcher is the political editor. SMH with lustrations by Rocco Fazzari