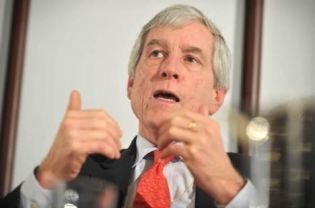 Nick Warner, director-general of Australia's Secret Intelligence Service (ASIS), speaks at the National Portrait Gallery in Canberra on July 19, 2012. Australia's top spy warned of the 'very real threat' from extremists, in the first public address by the head of the country's Secret Intelligence Service (ASIS) in its 60-year history. (AFP Photo/ Mark Graham)

Australia’s top spy warned of the “very real threat” from extremists on Thursday, in the first public address by the head of the country’s Secret Intelligence Service (ASIS) in its 60-year history.

Nick Warner said the security challenges for agents had dramatically changed over the past decade, as he provided a rare glimpse into the agency’s work in a speech designed to raise public awareness about the intelligence community.

He said the 9/11 attacks and the Bali bombings a year later in 2002 had redefined how spies worked.

Those events had seen ASIS, Australia’s foreign spy agency, intensify its focus on the “very real threat” posed by organizations like Al Qaeda and its affiliates.

Warner said there was now “a web of links between extremists from Australia to Indonesia, to the southern Philippines, to the FATA region [tribal districts] in Pakistan, and to Al Qaeda in the Arabian Peninsula in Yemen, and on to Somalia.”

“We know that the intention to conduct mass casualty attacks against Western countries, including Australia, remains very real,” he said, speaking at the National Portrait Gallery in Canberra.

“We also know that many of these planned attacks are being conceived in places remote from Australia.”

The threats had seen ASIS evolve from “a small, essentially regional body vitally focused on the Cold War into a larger, geographically dispersed organization” that liases with foreign intelligence services in 70 countries.

Warner said ASIS, working with foreign partners, has been closely involved with the arrest and detention of dozens of terrorists in Southeast Asia over the past decade — including in recent months.

“At its heart ASIS has a cadre of highly trained intelligence officers who recruit and run agents,” he added.

ASIS filed thousands of secret reports each year covering everything from “political developments, economic growth, defense modernization, and social cohesion in a particular country, to terrorist and insurgent planning,” he said.

“Government departments and agencies, together with corporate Australia, have been subject to concerted efforts by external actors seeking to infiltrate sensitive computer networks,” he said.

Warner gave no examples, but the computers of Australia’s prime minister, foreign and defense ministers were reported last March to have been hacked, with China under suspicion.

Energy giants Woodside Petroleum and Shell Australia have both expressed concern over hacking, with Woodside chief Don Voelte saying his firm had seen attempts from regions including Russia, eastern Europe and China.

Canberra has described government and private networks as being under “continuous threat” of cyber espionage.

“Considerable resources are now being invested by the government to counter this threat and harden the defenses of departments and agencies,” said Warner.

Agence Frane-Presse
Posted by Kerry B. Collison at 4:59 PM