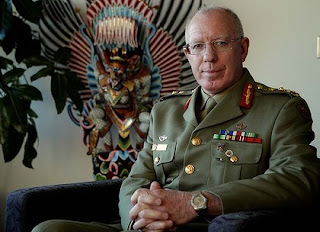 With a song in his armoury … General David Hurley. Photo: Alex Ellinghausen

THE Chief of the Defence Force, David Hurley, has three unusual weapons in his ''soft power'' armoury: karaoke, dinner and golf.


They are the ingredients, he says, for successful get-togethers of a little-known but influential military alumni association he helped set up in Jakarta last year with an old acquaintance, the former chief of the Indonesian General Staff, Edy Harjoko.

Membership of the association, called ''Ikahan'', is open to anyone in the Australian or Indonesian military who has studied in the other's country, or served with the other's forces on an extended exercise or posting.

While the Prime Minister, Julia Gillard, and the Minister for Defence, Stephen Smith, have been working on the political relationship with the Indonesian President, Susilo Bambang Yudhoyono, in Darwin this week, General Hurley is focused on the defence grassroots.

His goal is to ''get the militaries comfortable, confident in working with each other'', he told the Herald.


It is also the message he is hammering into students and officer trainees at defence colleges around the country.

''I say to them, 'In one sense, I don't care what academic mark you get. Your success for me is if you know two of the international students so well by the end of this course that you can pick up the phone and talk to them for the rest of your lives.' ''

Ikahan is branching out into a talent contest which kicks off at the Four Seasons Hotel in Jakarta next month.

The two sides will be vying for vocal and dance-floor supremacy in a good-natured tussle which, leaders hope, might one day make for easier conflict resolution should tensions start rising.

Thirteen years ago there was a near-confrontation between Indonesian and Australian troops in East Timor.

General Hurley has lent his own singing prowess to the cause, belting out a number at Ikahan's launch last year.

The network now has about 500 members and the model is being trialled with Malaysia, Thailand and Singapore.

''So that's four big countries for whom the person-to-person links, the understanding, can be improved enormously through these sorts of initiatives,'' General Hurley says.

He's hoping that spirit will feed through into regional joint defence exercises. The ADF is at present planning a trilateral disaster relief exercise with the US and Indonesia, and possibly China, which has ''indicated an interest in participating''.

General Hurley says he is aiming for a ''very mature relationship with the PLA [China's People's Liberation Army]''.

In recent unreported comments, he expressed concern about the relationship between the US and Chinese militaries. This, he says, was a reflection on the ''long-term framework for interaction'' between the two.

''What mechanisms do they put in place for their regular contact, what's the breadth and width of their range of engagements? When we understand how that will solidify … then we know where we can plug into it to best support it and influence it.

''You have to keep working that to the advantage of all the players in the region.''

Read more: http://www.smh.com.au/national/defence-boss-uses-rare-tools-to-build-foreign-friendships-20120706-21mfw.html#ixzz1ztW2SQSH
Posted by Kerry B. Collison at 6:06 PM