Don’t Like the Asian Venture Into State Capitalism? Blame the West 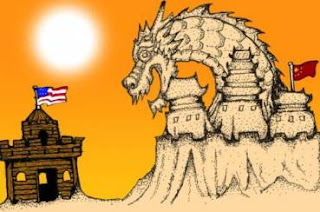 State capitalism, according to Bloomberg Businessweek, is a serious rival to US and European businesses, which face being excluded from some markets.

“Instead of trying to prevent — or worse, dismiss altogether — the rise of state-capitalist systems,” the magazine argues, “US and European companies and governments would do better to learn from them.” A similar case was made in the 1980s, when Japan’s state-supported conglomerates briefly threatened to take over the world. For a moment, Japan’s promotion of its technology industries through protectionism and targeting of open foreign markets seemed to affirm the superiority of state-supported capitalism.

The apparent success of China and Brazil’s own versions of state capitalism has now stoked fresh anxiety in Anglo-America. But most reckonings with it are still bogged down by questions about efficiency: For instance, is state capitalism more or less innovative or competitive than its free-market rival?

Such essentially technocratic arguments scant the long history of economic nationalism: the time, for instance, when many in Asia bristled at the power of state-backed capitalists and economic nationalists of Europe and the United States.

The West’s own rivalries set the tone for Asia. Writing to the directors of the United East India Company (VOC) in the early 17th century, Jan Pieterszoon Coen, the Dutch colonizer of Java, was revealingly blunt: “We cannot carry on trade without war or war without trade.”

The nexus between government and business reached its high point during the Opium Wars of the 19th century, when British merchants craving new markets in the Chinese hinterland repeatedly lobbied their country’s politicians into punitive assaults on China.

Nurturing local industries under highly protectionist regimes, US leaders, too, had absorbed Europe’s lessons by the end of the 19th century. Woodrow Wilson no less than Theodore Roosevelt knew that American goods and capital must urgently find markets beyond national borders. “Since trade,” Wilson argued in 1907, “ignores national boundaries and the manufacturer insists on having the world as a market, the flag of his nation must follow him, and the doors of the nations which are closed must be battered down.”

Wilson sounds as if he wanted to make the world safe for American goods and capital rather than democracy. But he was only being brutally realistic. The influential German-American economist Friedrich List had already rejected Adam Smith’s free-trade theory as unsuitable for the 19th century conditions of rivalry and inequality between nation-states.

List, who may have been influenced during his stint in the United States by Alexander Hamilton’s economic nationalism, had also spotted laissez faire’s built-in bias in favor of the trading interests of Britain, which had industrialized ahead of all other countries, and now threatened to undermine their nascent factories.

Certainly, there were few alternatives for Asian countries entering the race to industrial modernity. Visiting the United States in 1903, Liang Qichao, China’s foremost modern intellectual, came to fear its industrial trusts, which he claimed were more powerful than Alexander the Great and Genghis Khan could imagine.

To withstand the growing power of US economic imperialism and hold its own in the international jungle, argued Liang, China’s agrarian society needed not socialism but industrial production through capitalist methods carefully regulated by the state. He knew that Japan, coerced into the international economic order by the mid-century arrival of America’s “black ships,” had already embarked on a similarly ambitious program of state-led modernization to catch up with the West.

Two generations of Japanese had already absorbed List’s economic nationalism, which went on to survive the devastation of the World War II and an eccentric bout of New Deal welfarism under US occupation. Japan’s example was then followed by South Korea, Taiwan and Singapore. All these Asian state capitalists ironically received much assistance from the United States as it pursued its geopolitical interests, boosting local economies through wars in Korea and Vietnam, foreign aid, and its open markets.

Finally in the late 1970s, China, after a long spell with rigid central planning, started to look to Singapore for ideological guidance. Since then China’s careful adaptation of certain capitalist practices, and the creation of a native class of global businessmen, has periodically sparked optimism that it would follow Anglo-American neoliberalism in all its particulars.

This has proved to be a fantasy, based on a misreading of Chinese motives. The Chinese government’s encouragement of state-owned enterprises and control of strategic industries is at least partly rooted in the fear of a local entrepreneurial class that might challenge the Communist Party’s monopoly on power. Given the preponderance of various “princelings” in the country’s economic life, China’s state capitalism can seem merely a euphemism for crony capitalism.

Certainly, Friedrich List seems more prescient than Adam Smith in having recognized that the enlightened self-interest of individuals cannot be a useful principle for national economies that have to compete with one another even in an era of unrestricted trade and capital flows.

But learning from other examples of capitalism, as Bloomberg Businessweek exhorts, might be more difficult than it seems. The biggest beneficiaries of globalization in the West today embody the Ayn Randian ideal of the profit-maximizing, self-seeking capitalist. A small global elite of businessmen and investors has come to depend more on supply-chain manufacturers in Taiwan and bankers in the Cayman Islands than on workers within any given national borders.

That elite can afford to forgo any sense of national solidarity or a shared economic fate with its fellow citizens. And in the current US ideological climate, advocacy of collective effort or responsibility is quickly stigmatized as the harbinger of Stalinism.

Such is the impasse, political as well as socioeconomic, into which laissez faire ideologues have led entire nations. It won’t be easily overcome. By Pankaj Mishra a Bloomberg View columnist.