Women to Watch in Indonesia 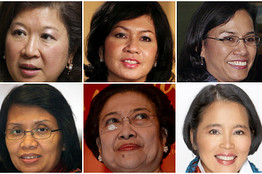 Rights activists have long complained that women are under-represented in Southeast Asian companies and governments, and Indonesia is no exception. A 2011 report into boardroom diversity across the world by the U.K. government found that women occupy 4.1% of the board seats at Indonesian companies. As of 2009, women made up just 18% of the country’s legislators, according to a United Nations study.

Activists also argue that outdated attitudes toward women persist in the archipelago nation, even though a woman was  president in the early part of the last decade and the economy is modernizing rapidly. Indonesian legislators drew fire earlier this year for suggesting that authorities ban miniskirts in parliament to prevent “untoward acts” by their male colleagues – an idea many Indonesians thought highlighted archaic attitudes toward gender. The rule never passed. Serious problems with sex tourism, human trafficking and domestic violence also remain.
Nevertheless, a number of enterprising women are breaking through boundaries in business and political circles, providing new role models for younger women in the country. At the same time, social media is empowering women to press for more opportunities and combat negative stereotypes.

Here is the WSJ’s pick of some of the most influential women making waves in the fast-changing nation.

After working as Indonesia’s minister for trade from 2004 to 2011, Mari Elka Pangestu now serves as the country’s minister of tourism and creative economy, a new role created under current President Susilo Bambang Yudhoyono. Trained as an economist, Ms. Pangestu has been credited with leading successful trade negotiations, and oversaw significant export growth in the country during her seven years as trade minister. Unafraid to challenge domestic interest groups, including agriculture and fisheries groups that favored more protectionist policies, Ms. Pangestu is also known as a prolific and forceful advocate of Indonesian interests abroad at international events such as the World Economic Forum. In her new role, she focuses on promoting tourism – considered by many economists to be an under-developed sector with big potential for growth – and industries such as start-ups and entrepreneurial ventures. She has been a strong proponent of women in business, arguing that encouraging more women-led companies can benefit society at large.

The leadership of most of Indonesia’s biggest conglomerates and industrial players is heavily male-dominated. Pertamina, the country’s state oil and gas corporation, is one of the exceptions – it is led by Karen Agustiawan, the company’s chief executive. Listed as one of Asia’s most powerful businesswomen by Forbes magazine, Ms. Agustiawan was the first woman to head Pertamina’s upstream division, responsible for managing the country’s drilling rigs. A graduate of Bandung Institute of Technology with a degree in engineering, Ms. Agustiawan initially planned to pursue a career in academia, according to local media reports, but was swayed toward business by her father, who was the first Indonesian envoy to the World Health Organization. As CEO of Pertamina, she has pushed for more expansion overseas and developed alternative energy sources, including coal bed methane projects
.
Sri Mulyani Indrawati

Named by Forbes magazine as one of the 100 most powerful women in the world, Sri Mulyani Indrawati is the most senior woman at the World Bank, having served as one of its three managing directors since 2010. Trained as an economist, Ms. Indrawati previously served as Indonesia’s finance minister from 2005 to 2010, and was widely seen as a prime mover behind policies that laid the foundations for the country’s economic resurgence in recent years. She earned especially high marks for steering the nation through the global financial crisis, when it posted strong growth even as the rest of the world slid into recession. Indonesia’s debt was cut in half during Ms. Indrawati’s time as minister, with reserves reaching an all-time high. She has also been praised for helping lead anticorruption initiatives while in office and for taking on some of the country’s most powerful – and usually male – business leaders. When she left Indonesia’s cabinet to take up her current position at the World Bank, stocks in the country fell sharply, the rupiah weakened, and bond yields rose—testament to the world’s confidence in her reformist credentials. Although now based in Washington, she continues to command a following in Indonesia, where she is often mentioned as a possible presidential candidate for 2014.

As Indonesia’s deputy finance minister, Anny Ratnawati is seen as the country’s second potential female powerhouse in economics after former finance minister Sri Mulyani Indrawati. Appointed to her post in 2010, Ms. Ratnawati worked as a lecturer at the Bogor Agricultural Institute (IPB), where President Susilo Bambang Yudhoyono obtained his doctoral degree. She has been an important aide to Mr. Yudhoyono on economic issues, serving as an adviser on economic policy during his first bid for president in 2004, and has also helped as a speech writer. Colleagues at IPB say her expert knowledge in macroeconomics and the financial sector rival that of Ms. Indrawati, and she is widely considered as a rising star in Mr. Yudhoyono’s political team.

Megawati Sukarnoputri was born with some advantages, as the first daughter of Indonesia’s first president, Sukarno. Still, she made history as the country’s first female president, and is only the fourth woman to lead a Muslim-majority nation. After taking office in 2001 in the wake of the Asian financial crisis, Ms. Megawati led a country plagued with economic problems and sectarian violence, and some political analysts said she struggled to quell corruption and threats from Islamic militants. Though she lost an election bid to current president Susilo Bambang Yudhoyono in 2004, Ms. Megawati continues to wield significant influence eight years on as the chairwoman of parliament’s third-largest party, the Democratic Party of Struggle. Polls suggest that she may have a legitimate shot at the nation’s top post when elections are held in 2014, but she has remained vague on whether she intends to run. By Shibani Mahtani Wall Street Journal