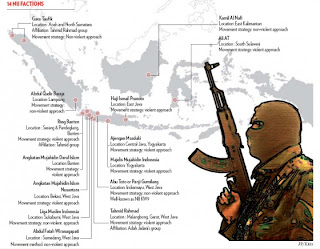 Jakarta. Indonesia’s arrest of 11 suspected Islamic militants it said planned to attack the US embassy and a plaza near Australia’s embassy is evidence that legal extremist groups are turning to violence, analysts said on Sunday.

The arrests could also step up pressure on the government of President Susilo Bambang Yudhoyono, criticized for doing too little to curb religious intolerance in the country which has the world’s largest Muslim population.

The arrests by the elite squad on the island of Java were the latest in a crackdown against militants during which dozens have been arrested and at least seven killed.

They come 10 years this month after a bomb attack on Bali killed 202 people, most of them foreign tourists.

“The first piece of evidence was found at a housing complex in Madiun [Java], a bomb ready to detonate, as well as raw materials for bomb making and instruction books on how to make bombs,” Alius said.

He listed targets as the US consulate in Surabaya, East Java, its embassy in Jakarta, Plaza 89 in Jakarta, which is in front of the Australian embassy, and the offices of prominent mining company Freeport-McMoRan Copper & Gold.

HASMI also planned to attack the Mobile Police Brigade in the central Java city of Srondol, he said, adding that the spiritual leader of the group had been arrested.

Australia’s Department of Foreign Affairs and Trade declined to comment on security at its Jakarta embassy and a spokesperson said it had no information to suggest Australian citizens or interests were the group’s intended target.

HASMI first surfaced in 2009 as a small “above ground extremist” organization based in West Java and with links to the Islamic Defenders Front (FPI), said Todd Elliott, a terrorism analyst at Concord Consulting in Jakarta.

Until now, HASMI has not been linked to illegal activity. It existed, like the FPI, as a militant pressure group separate from Indonesia’s banned militant organizations, Elliott said.

“They [HASMI] definitely pose a very real threat. We are seeing the next step in a bigger trend of above ground extremist groups crossing over into violence,” he told Reuters.

Members of the FPI had also been implicated in previous attacks, including a suicide attack on a mosque used by police in Cirebon, West Java, in 2011, he said.

Salafi Muslims are generally against violence but there are cases in which they turned to violence, Della-Giacomo said.

“The apparent choice of the US embassy as a target shows that the so-called ‘far enemy’ is still a desirable target among Indonesian jihadis... and not just Indonesian police or the so-called ‘near enemy’ who have been preferred in recent times,” he said.

The group’s name links them to a militant group operating in Kashmir and it is possible that some of its members may have trained with the Kashmiri group, said Damien Kingsbury, a professor at Deakin University in Australia.

HASMI’s members would also likely have at least informal links with other militants in Indonesia and the group’s existence is further evidence of the continuing threat, said Kingsbury, an expert on Indonesia.

The 2002 Bali bombings, which in turn came just over a year after the Sept. 11 attacks on the United States, were a watershed for Indonesia. They forced the secular state to confront the presence of a small but dedicated group of followers of Osama bin Laden bent on attacking Western targets.

Indonesian forces has since worked with Australia and other countries to crack down on the al Qaeda-linked Southeast Asian militant group Jemiah Islamiah that was behind the bombs.

The hunt led to the arrest of hundreds of militants. Many were killed in shootouts and the three main perpetrators of the bombings were convicted and executed by firing squad in 2008.

Indonesia has been largely successful in containing militant attacks and there have been no large-scale attacks on Western targets since 2009 when suicide bombers blew themselves up in two Jakarta hotels, killing nine people and wounding 53.