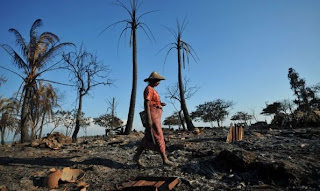 A bloody road to apartheid

MYANMAR’S government has reported that 82 people have died in the past week’s ethnic violence in the western state of Rakhine, and 2,800 houses been razed by fire. Both figures are almost certainly underestimates. The whole length of the state, a narrow coastal strip whose northern end borders Bangladesh, has seen mounting tension and often fighting between the majority Rakhine population, who are mostly Buddhist, and the Rohingya minority, who are mostly Muslim and are seen by many Rakhines and other Burmese as illegal Bangladeshi immigrants.

Human Rights Watch, a New York-based monitoring and lobby group, has used satellite imagery to show the destruction by fire on October 24th of a Muslim quarter on the island of Kyauk Pyu. The residents are reported to have fled, in many cases by sea, to the state capital, Sittwe. There, some 75,000 people, mostly Muslim Rohingyas, are already confined to squalid camps for the internally displaced, where they have been living since the previous bout of blood-letting in June. 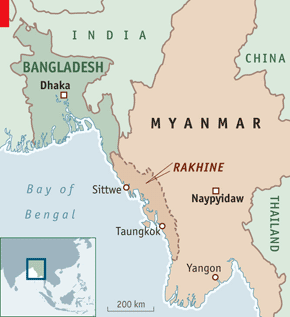 Trouble in Kyauk Pyu will be of particular concern to the central government—as well as to China—since it is to be the site of a port from which oil-and-gas pipelines across Myanmar to south-western China will be supplied.

Violence was also reported in at least five other areas on October 26th. Curfews are in place in Mrauk-U, in the neighbouring district of Min Bya and in Sittwe itself. Tourists are being stopped from travelling to Mrauk-U.

In the south, in Thandwe, a town of 50,000 of whom 30-40% are said to be Rohingyas, tension is high and ethnic Rakhines say they no longer dare be seen associating with their Muslim friends. They see it as only a matter of time before the conflict reaches them, and for this they blame the Rohingyas.

In surrounding villages, some Rohingya families have already been threatened into leaving. Yet there is no obvious sign of increased security. The government has been accused—in June and again now—of doing too little to protect the Rohingyas. Indeed, the security forces are accused of committing abuses of their own against them.

After the violence in June, many Rakhines are convinced that only total separation of the two ethnic groups can ensure harmony. That belief is now being put into practice, as Muslim districts are torched and crudely armed militias of young Rakhines wage ethnic war.

The latest round of violence started on the evening of October 21st in Mrauk-U, a tourist centre that was once the capital of an independent kingdom of Arakan. A Rakhine merchant was killed there by a mob after being caught selling a large quantity of rice to Muslims. The next morning, in what seems to have been a related incident, three Rakhines were killed, unleashing a terrifying wave of revenge attacks on Muslim villages around Mrauk-U. By October 24th unrest had spread across the state.

The bloodshed in June was sparked by the rape and murder of a Rakhine girl. But historic animosities run deep. The Rohingyas are not recognised by the Myanmar government as a separate minority. Most were deprived of citizenship by the application of a 1982 law on nationality, and so are regarded as illegal immigrants. In 1992, 250,000 were repatriated from Bangladesh, where they had fled following earlier rounds of persecution.

The government has said that the situation in the state is now basically under control. That, too, is questionable. A particular worry is in Sittwe itself, a town of about 200,000, half of them Buddhist, half Muslim. Just one Muslim district in the centre of town, Aung Mingala, survived the ethnic cleansing in June. Its inhabitants are not allowed out, even to shop. But the quarter is a focus for local Rakhine activists, who want to see it cleared too.

Even democracy activists in Yangon, Myanmar’s biggest city, refuse to acknowledge the Rohingyas as Burmese citizens. Aung San Suu Kyi, the opposition leader, has said she does not know if they are or not. Thein Sein, the reform-minded president, said in June that the only solution was for the Rohingyas to relocate to another country. Shocking as this sounded to many foreigners, to most Burmese, and virtually every Rakhine, it was no more than a simple statement of fact. The Economist (Picture credit: AFP)