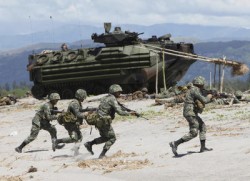 This might be a blatantly obvious statement but it is worth remembering in the context of the discussion surrounding the US pivot to Asia and the emerging military-operational concept of Air-Sea Battle.

Air-Sea Battle has become the showpiece US military concept for countering China’s Anti-Access/Area-Denial (A2AD) system over the last two decades. But it is important to note that Air-Sea Battle is just one component of the US military’s approach to countering A2AD. The overarching framework for Air-Sea Battle is the US Joint Operational Access Concept (JOAC). JOAC consists not only of Air-Sea Battle, which is in fact principally designed to deal with anti-access technologies and strategies which prevent forces from entering an operational area, but also the Gain and Maintain Access Concept (GMAC). In the littoral environment, the GMAC deals with area denial, or limiting freedom of action within an operational area once access has been achieved. The GMAC is aimed at ‘the capability for decisive action on land and in the littorals’ and is primarily the domain of the US Army and Marine Corps. 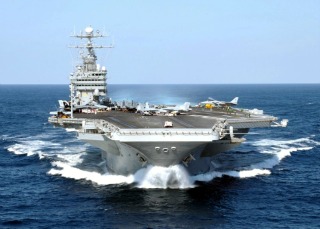 As the title suggests Air-Sea Battle is fundamentally focused on the Air Force and Navy. But discussing Air-Sea Battle in relation to US military concepts for A2AD is like talking about only the back two wheels of a tricycle. What’s missing is the front wheel — land power — an essential element for achieving a decisive effect. Most battles at sea, and in the air, take place close to or over land. As the great naval theorist Julian Corbett reminds us, there is a fundamental interdependence between naval and land warfare, and it is virtually impossible for naval power to win a war on its own.

Corbett’s influence can be clearly seen in the change in approach to operations by the US in the post-Cold War era. During the 1990s it transitioned from securing the North Atlantic sea lanes in the event of war with the Soviet Union to projecting power into the littoral environment. As maritime strategist Geoffrey Till has noted, during this period the US Navy transformed itself into the biggest coastal navy in the world — it just operates off other countries’ coastlines. A fundamental element of this approach has been the concept of ‘sea basing’ of forces, along with the development of littoral combat ships and Expeditionary Strike Groups (ESG). These ESG’s are built around the US Navy’s large amphibious assault ships with an embarked US Marine Corps force, cementing the notion that maritime power, as opposed to naval power, is the critical factor in the littoral environment. 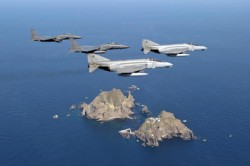 This land-power component undertakes essential tasks, such as securing air and sea ports (especially those in maritime chokepoints that are essential for naval operations), neutralising threats from land, and denying opposing forces sanctuary. Most significantly though is the land forces’ ability to control and influence populations — something almost impossible to achieve from the air or sea. This is critical given that the overwhelming bulk of the world’s population is concentrated along or near coasts.

It should not be forgotten that Air-Sea Battle is all about the US getting access to an operational area so as to achieve an effect. That effect is all about what happens on the land area of the littoral environment.

But the role of land forces should not be overstated. Commentators frequently point to the limitations and risks of the use of land power in the region. As former Secretary of Defense Robert Gates noted in 2011, ‘any future defense secretary who advises the president to again send a big American land army into Asia… should have his head examined’.

This may well be sage advice, but there is a vast difference between mainland continental Asia and the broader Asia-Pacific region. The Pacific alone comprises somewhere between 20-30,000 islands, while Indonesia, Brunei, East Timor, Singapore, Japan, the Philippines and Taiwan are solely made up of islands and have no territory on mainland Asia. The Pacific Ocean is not an air-sea gap to mainland Asia that US air and maritime forces must cross — rather it is an air-sea-land operating environment.

So, for JOAC and Air-Sea Battle to get traction it is critical that the US Army and Marine Corps have a clearly defined role and are fully committed to these strategic concepts. This is essential, otherwise JOAC’s fundamental aim, to unite Air-Sea Battle and GMAC in order to achieve ‘cross-domain synergy’ — in other words, a greater degree of integration between all arms of the US defence forces, including in the cyber domain — will fail.

What JOAC and GMAC reveal is that land power is a critical element of the US approach to China’s A2AD strategy. Joint operations across all three domains of air, sea and land are crucial to effective military operations. Air-Sea Battle, while dominating the debate, is only one element in a broader joint operational concept and underscores the ongoing importance of land power in maritime environments such as the Asia Pacific.

Peter Dean is Senior Lecturer at the College of Asia and the Pacific, and Director of Studies at the Strategic and Defence Studies Centre, the Australian National University. East Asia Forum