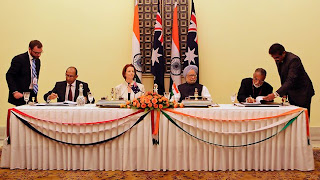 Julia Gillard and Indian PM Manmohan Singh watch as agreements are signed in New Delhi last week. Picture: AP Source: AP
DOES Ken Henry dance Gangnam Style? We'd better hope that the former Treasury chief drafting the long-overdue white paper on Australia in the Asian Century has a robust grasp of what the explosive success of this Korean phenomenon tells us.

The YouTube sensation - 500 million hits and counting - created by the droll rapper and dancer Psy (Park Jae-sang) went live in Sydney last week, with Psy being swamped by excited Australians including, naturally, many of Korean descent.

This shows us what the Asian Century is starting to look like.

Singapore's Prime Minister Lee Hsien Loong said about Asia on a visit to Australia a few days ago: "We are entering a new phase - the economy is mature."

Smart commercialisation of a fun idea - one that parodies itself and its roots in the nouveau riche suburb of today's Seoul - is a face of this new, mature Asia.

Note the way that Samsung wraps itself around "Gangnam Style". And Samsung is, of course, just one of the Korean brands that have gone global, with Hyundai, LG and Kia also to the fore. Those companies, and today's sensational Psy, are everywhere.

Australia's engagement with Asia, on the other hand, is not so evident. While we send two-thirds of our exports to Asia, only about 7 per cent of our direct investments are there. Almost no one among our top chief executives and chairmen, public service chiefs or university heads has ever lived or worked in Asia or speaks an Asian language - although we did once have a prime minister who spoke Chinese.

However, at another level Australians have developed a deep awareness of their dependence on Asia, and especially on its economic performance.

Former prime minister Paul Keating once said wryly: "I guarantee if you walk into any pet shop in Australia, what the resident galah will be talking about is microeconomic policy."

Today, it would be talking about Asia, especially about China's appetite for our iron ore, and even - if it is a slightly more sophisticated galah - about whether China's recent downturn is merely cyclical or the start of a deeper structural transformation. Especially a transformation towards a more diverse, Korea-style economy with a stronger services sector and a bigger role for its own consumers.

Asia, with its thoroughly integrated manufacturing structures - say, machine tooling in Japan, electronics in Taiwan, financing in Hong Kong, screens in Malaysia, with assembly in China - is feeling the pain not only from the European and American slowdowns but also from slackening domestic demand.

Asia outside Japan hit 7.2 per cent economic growth last year. But this month the Asian Development Bank again revised down its forecast for the year, to 6.1 per cent, the slowest rate for three years. The bank's predictions for the year have fallen steadily - from 6.9 per cent in April and 6.6 per cent in July.

The bank has also just scaled back its forecast for next year, from 7.1 per cent to 6.7 per cent.

Commodity prices have been falling from their stratospheric levels, reflecting declines in demand from Asia more than a step up in supply from elsewhere in the world.

So, then, is the Asian Century over so soon after it began? After we in Australia finally "got" the message that this is where the centre of economic gravity has shifted? If that proves to be the case, where can we turn next for salvation?

This is to be a core theme at the forthcoming conference Securing the Future - the eighth Economic and Social Outlook Conference to be jointly presented by The Australian and the Melbourne Institute - at the University of Melbourne on November 1 and 2.

Julia Gillard, like most of Australia's political leadership, remains confident about Asia continuing to take up the global slack and driving growth, despite weaker numbers in the past few months. The Prime Minister retains the hope that maximising our economic engagement with India, which includes the sale of uranium once safeguards are in place, as well as China, will broaden our prospects of navigating troughs, such as the one we are now experiencing.

She said during her three-day visit to India last week that the countries had "set a goal of $40 billion trade in 2015 - in other words, our trade could double". She added that trade between the two nations was growing at 13 per cent a year. Indian investment approvals in Australia grew last year alone to more than $11bn.

But India's recent decline in growth has been sharper than China's, and as Saul Eslake, chief economist Australia at the Bank of America Merrill Lynch, said last week, India will find it hard to match even the slower rate of Chinese growth.

At the Securing the Future conference, economist Ross Garnaut will expand on his theme that the Asian story is radically different in different countries - but that the overall outlook is benign, despite the current slowdown and structural shifts.

"Japan is the first post-developed country: incomparably comfortable for its citizens, natural calamity aside," he says.

Japan has the world's greatest longevity and excellent health, education, arts at all levels, household financial security, employment, personal and public security, information technology, and substantial and improving environmental efforts, both domestically and contributing to the international scene.

Japan is experiencing "rapid ageing and slow growth, but low unemployment and with output per work-age person growing only slightly more slowly than the US". This is where South Korea and China are headed too, says Garnaut. "If Japan is the destination of modern economic growth, then modern economic growth is a good thing." He points to the high income of more recently developed economies and societies of Asia - Hong Kong, Taiwan, Singapore, South Korea.

Economic growth in these countries is still on a stronger trend than in high-income countries elsewhere.

China, says the former ambassador to Beijing, "is making a start on a historic transition, to greater domestic orientation on growth, higher wages and consumption, less inequity in income distribution, greater focus on the impact on the global and domestic environment - all rather more smoothly and rapidly than widely anticipated".

Moderately slower growth is emerging there, as anticipated by analysts who have stayed close to Chinese developments, he says - including by Garnaut's own projections, as in his Climate Change Review. The structural change, he says, is more significant than the accompanying fall in China's growth trajectory.

China is still, he says, "headed to be the world's largest economy by all measures within a decade, and towards sustained strong growth for another decade after that".

But the nature of China's change is now different, "with less opportunity for coal and iron ore, the staples of the post-2004 Australian resources boom, and more for other things".

The Zeitgeist of those "other things" is typified by Psy's Gangnam Style "soft-power"
bandwagon.

Garnaut anticipates the return of "reasonably strong growth in India". He says: "Contemporary realisation of what is at stake is causing more effective focus on the problems" with the return of the "safe hands" - reformist hands, too - of Palaniappan Chidambaram to a third stint at the Indian Finance Ministry.

Indonesia, which he describes as the other great democracy of Asia, has remained closer to its recent growth pattern.

Outside Indonesia, the biggest developments in southeast Asia are: The Philippines doing better; the entrenchment of high performance by global standards in Vietnam; and Burma starting to join the international economy.

"Basically, southeast Asia is a story of good tendencies being sustained," says Garnaut comfortingly. He adds that "Bangladesh is worth more attention than it is given, for its potential for strong growth in one of the world's most populous countries".

He believes the gap between the Asian economic performance and that of the North Atlantic, which became more pronounced with the Great Crash of 2008, will be sustained, and become even more important as the relative weight of Asia increases.

"India and Indonesia are, and will be increasingly, important to Australia, but neither in the same way that China was important in the first 11 years of the century. Their economic growth will use steel and coal less intensively - per unit of domestic output. Opportunities will be less intensively focused in areas of Australia's early 21st-century export specialisation."

So Asia will be looking for less ore and coal, but for more Aussie Style.

Strategic analyst Michael Wesley, former Lowy Institute head, who is also speaking at the Securing the Future conference, says: "To interpret the recent run of economic data out of Asia as the beginning of the end is a vast overreaction. There has now been a run of poor data out of China and India, but I have seen no convincing analysis that this is due to a fatal flaw in either economy. I'd put my money on this being a blip.

"My prediction is that our economic enmeshment with Asia will deepen. At the moment we have a bifurcated economy. In trade terms we're tied to Asia but in investment terms it's Europe and America."

Wesley believes this will change as the economic malaise continues in the Atlantic economies, "tying us more closely to Asia's economic cycles".

Roger Donnelly, who is the chief economist at the government's risk agency, the Export Finance and Insurance Corporation, suggests two directions in which the government might better concentrate its efforts for the Asian Century - first, disseminating analysis of "megatrends" in the outside world, as in the long-anticipated Henry report, to help the private sector make better-informed decisions. Second, working to break down trade and investment barriers that thwart Aussie businesses from doing good offshore business.

Donnelly believes the region is experiencing a "cyclical downswing". He is persuaded, as are most economists, that China's trend growth will decline, chiefly as a result of its demography, from double digits to about 6-7 per cent.

"What about the rest of Asia? Some other heavily populated Asian countries like India, Indonesia, Vietnam, The Philippines and Bangladesh are already showing signs of turbocharging their growth like China, and might sustain this effort." However, some might fall into a "middle-income trap" - focusing on redistributing wealth before it is earned.

An equally important threshold is crossed when countries stride more boldly outwards. But so far Australia has remained fixated on bringing foreign students here and attracting foreign investment, rather than on how many students it sends to Asia, and how much it invests there.

Psy has conquered the world for South Korea. Can Henry help us do the same, Aussie-style?