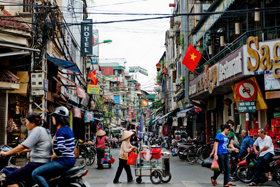 In Photo: Street vendors push their carts along a side street in Hanoi. Growth fell below 7 percent in 2008 for the first time in seven years and could drop to 5.2 percent this year, the government estimates, the slowest since 1999. (Bloomberg)

VIETNAMESE coffee farmer Le Thi Do looks up at the 5-meter-high ceiling of her six-bedroom, yellow house and then points to a small, squat building next door and says: “We used to live in that tiny one.”

Do, 71, has been a barometer of Vietnam’s fortunes since the French left in 1954. As the country divided, her family fled to the south, surviving the war, Communist victory and a decade of hardship that followed by growing vegetables. As the economy opened in 1986, she switched to coffee and prospered as the rate of economic growth tripled in five years.

Then, the boom that benefited Do and millions of others started to slow. Prices of fuel, raw materials and labor soared as the currency fell. Banks, tied to funding state monopolies, became reluctant to lend to small businesses. Bad debts rose. Growth fell below 7 percent in 2008 for the first time in seven years and could drop to 5.2 percent this year, the government estimates, the slowest since 1999.

“This year has been very difficult for everyone,” said Do, who had to raise pay 20 percent for harvest pickers, to 120,000 dong ($5.75) a day. “We need funds for cultivation, but we have limited access to bank lending. You can get a loan if you have good connections. Otherwise, it’ll be little or no money.”

After two decades of development, Vietnam risks falling into the so-called middle-income trap, where rising earnings and costs outpace productivity. Government pledges to restructure banks, curb corruption and reorganize the public sector may take years, prompting investors to turn to faster-growing rivals in Southeast Asia, such as the Philippines and Indonesia.

“Moving through the middle-income bracket is risky and requires time, political will, perseverance and luck,” said Jonathan Pincus, an economist in Ho Chi Minh City with the Harvard Kennedy School’s Vietnam program. “The government needs to do more to reform the economy and get back to a sustainable higher rate of growth. You have to do the hard part of building institutions, building a legal system, enforcing the rules governing financial institutions.”

Government efforts to curb rising prices and stabilize the dong slowed growth to 4.7 percent in the first nine months of 2012. Inflation eased to a year-on-year pace of 6.48 percent in September from more than 23 percent in August 2011. The currency has risen about 0.9 percent this year against the dollar, after falling more than 7 percent in 2011.
Stocks drop
The slowdown has hurt stocks, with the benchmark VN Index, Asia’s worst performer in 2011, down 18 percent since its peak this year on May 8. Yields on five-year government bonds have fallen 220 basis points since the start of 2012, to 10.35 percent, as inflation decelerated and lenders sought the relative safety of state-backed debt.

Communist Party General Secretary Nguyen Phu Trong apologized two days ago in a televised address to the nation for “big mistakes” made by the ruling party, including corruption and lax oversight of state-owned conglomerates.

“We are trying to speed up the restructuring process of state companies, aiming to improve their operations and efficiency,” Deputy Finance Minister Vu Thi Mai, said in an October 11 interview. She said that as of the end of last month, 53 state enterprises had submitted restructuring plans to reduce costs and accelerate “the privatization process.”

The country faces a challenge that others have struggled to overcome. Of 101 middle-income economies in 1960, 13 attained the World Bank’s high-income bracket by 2008, including Japan, Hong Kong, Singapore, South Korea and Taiwan, according to a report this year from the Washington-based development lender.

Vietnam joined the World Bank’s lower-middle income bracket in 2009, with gross national income (GNI) per capita rising to $1,260 last year, from $110 two decades earlier, according to the bank’s web site.

Once Southeast Asia’s fastest-rising destination for foreign investment, Vietnam risks losing out as other nations in the region become more attractive to investors.

Pledged foreign direct investment (FDI) to Vietnam fell 28 percent in the first nine months of 2012 from a year earlier, the government says.

FDI inflows rose more than 31 percent in Malaysia and Indonesia in 2011 and an estimated 89 percent in neighboring Myanmar, compared with a 7-percent drop in Vietnam, according to the United Nations Conference on Trade and Development.

“The appetite that a lot of global investors have for Myanmar in particular now, but also countries like Indonesia and the Philippines, is based in part on disillusionment about Vietnam’s performance relative to its promise,” said Mark Gillin, a director of AIM Capital Management Ltd. in Ho Chi Minh City. “Given the work ethic and the dynamism of the people here, Vietnam should be doing far better.”

Moody’s Investors Service on September 28 cut the rating on Vietnam’s debt for the first time since 2010 to B2, leaving it on a par with Cambodia and five levels below Indonesia.

Vietnam’s banks have the highest level of bad debt in Southeast Asia, according to Moody’s.
Vietnam dropped 10 places to 75 on the World Economic Forum’s Global Competitive Index this year, swapping places with the Philippines, which rose 10 slots to 65.

Even so, the country has come a long way since 1986, when the government swapped Soviet-style central planning for “Doi Moi,” or economic renovation—allowing private business and granting packages of land to farmers to grow their own crops.  Written by Bloomberg News