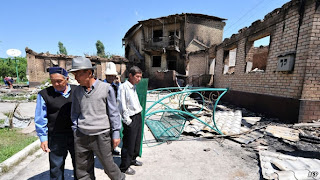 THE half-burnt hulk of one of his mansions still stands across from a Chinese restaurant in central Bishkek. When his father fled Kyrgyzstan two-and-a-half years ago, rioters looted and torched the house. Later, a group of disabled squatters moved in and demanded the estate become a shelter.

Ever since Maxim Bakiyev appeared in Britain, on a private jet, shortly after his father was ousted in bloody street demonstrations on April 7th, 2010, Kyrgyzstan has been trying to get him back. So there were many celebrating in Bishkek after he was arrested in London’s upscale Belgravia neighbourhood on October 12th. In a surprising twist, the arrest was made at Washington’s behest. The Americans want to try the 34-year-old “on serious charges of conspiracy to commit securities fraud and obstruction of justice”.

One of the most hated figures in the impoverished Central Asian country, the younger Bakiyev stands accused in Kyrgyzstan of embezzling tens of millions in state funds. Known simply as “the Prince,” Mr Bakiyev was once one of the sole benefactors of a regime that his family ran as a private business. He headed Kyrgyzstan’s development agency, known locally as “Tsars”, a riff on its Russian-language acronym. Many say his greed fuelled the uprising that unseated his family.
It was with jet-fuel contracts that he likely raked in the real money. Kyrgyz prosecutors accuse Mr Bakiyev of evading at least $80m in import duties, while allegedly controlling supplies to the American air base at Manas.

At the time, the American side, desperate to keep the base, a vital staging ground for the war in Afghanistan, looked the other way. After the Bakiyevs were booted out, American officials had to work hard to win over the new leaders, whom they had kept at arm’s length while Maxim Bakiyev’s dictatorial father, Kurmanbek, held power. Later, Congressional investigators criticised American officials for having coddled the reviled family, and for fostering the perception they had paid off the Bakiyevs to keep the base open.

Maxim Bakiyev’s arrest is a boon to the struggling government of Kyrgyzstan, where many are angry that the ousted clan has found refuge abroad. His father lives in Minsk as a guest of Belarus’s president, Alexander Lukashenko, out of the reach of prosecutors. Maxim’s uncle Janysh, a dreaded chief of security whose alleged terrors belong in one of the “Godfather” films, appeared there recently, too, prompting protestors in Bishkek to attack the Belarusian embassy.
The younger Bakiyev had reportedly sought asylum in Britain, and denied all the charges against him. He has argued, not implausibly, that he cannot receive a fair trial at home. So it’s unlikely any Western nation would send him back. For now, he’s free on bail, until a hearing in December.

It’s unclear what the Americans would do with Mr Bakiyev if they were to get him. Many Kyrgyz would cheer his imprisonment, wherever it may be. But others will demand his extradition to Kyrgyzstan—and could tie his return to America’s status at the precious Manas base. Once again, America’s diplomats have set themselves up for a delicate dance with a volatile ally.

Lucky for him, Maxim Bakiyev doesn’t have blood on his hands (at least none we know about). Back on that rainy April day in 2010, when his family was overthrown, riot police clashed with protesters. Almost 100 bodies piled up in Bishkek’s central square. Maxim’s father and uncle are being tried in absentia for having caused those deaths. But Maxim has an alibi. That day he was en route to Washington, to discuss investment with American officials.

By Banyan for The Economist