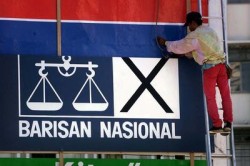 Jakarta/Brussels, 26 September 2012: Demographic and social change, easing of authoritarian controls, a growing civil society and economic uncertainty are shaking the communal foundations of Malaysian politics and making the outcome of its coming election unusually unpredictable.
Malaysia's Coming Election: Beyond Communalism?, the new report from the International Crisis Group, examines the political landscape ahead of the thirteenth general election that will likely be called later this year or early next. More than ever before, there is a chance - though a very small one - that the world's longest-serving elected political coalition, the National Front (Barisan Nasional), could face defeat at the polls, despite the way the political deck is stacked against the opposition.
"Both sides are using images of the Arab Spring, with Barisan warning of chaos if it is not returned to power and the opposition predicting popular unrest unless political change comes faster", says Sidney Jones, Senior Adviser to the Crisis Group Asia Program. "While these warnings are almost certainly overdrawn, there is no doubt that Malaysia is changing, and no one is sure what direction it will take".
Barisan has based its longevity on giving preferential status to the country's majority Malays in exchange for guarantees to the Chinese and Indian minorities of security and economic growth. The opposition, campaigning on issues that transcend ethnicity, such as transparency, social justice and electoral reform, is finding support in the Malay middle class in a way that has forced Barisan to address many of the same issues. Prime Minister Najib, Barisan's leader who remains personally popular, has been presiding over a slow process of political liberalisation, amending, revoking or replacing some of the laws that for decades placed tight curbs on civil liberties. Conservatives in his own party, led by former Prime Minister Mahathir Mohamed, warn that t hese reforms will lead to anarchy; opposition leaders call them too little, too late.
The outcome of the election could hinge on several factors: developments in the two eastern states of Sabah and Sarawak, on Borneo, that control a quarter of the seats in parliament; the ability of the opposition to maintain a united front; the impact of a series of corruption scandals linked to senior government officials; the impact of Barisan's ability to dole out economic favours to strategic constituencies; and the state of the economy at the time elections are finally called.
"With a loosening of Mahathir-era controls, political space will widen not just for the champions of civil rights and racial equality, but also for hardline civil society, whether ultranationalist or Islamist", says Jim Della-Giacoma, Crisis Group's South East Asia Project Director."The question Malaysians need to answer on election day is which of the two coalitions will be better able to handle those pressures while moving the country toward greater openness".
Read the full report at http://www.crisisgroup.org/~/media/Files/asia/south-east-asia/malaysia/235-malaysias-coming-election-beyond-communalism.pdf?utm_source=malaysiareport&utm_medium=3&utm_campaign=mremail