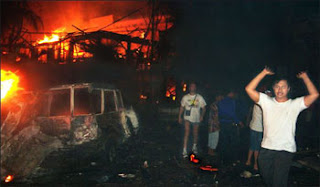 THE Bali bombing, the worst slaughter of Australians since World War II, has left a strange legacy a decade later -- a deep debt to Indonesia's counter-terrorism success, the elevation of Bali as an Australian sacred site and a gulf still separating the peoples of these two democracies.

The tragedy at Bali brought Australia and Indonesia closer together in pursuit of a common foe, the Islamist terrorist outfit Jemaah Islamiah, which killed 88 Australians and 38 Indonesians in a total death toll of 202. It was Indonesia's worst terrorist event.

The crisis provoked magnificent co-operation between police authorities. Yet the broader Australian-Indonesian partnership, so essential for both nations, remains far short of what is necessary.

Bali touched the Australian soul. It became a variation on our narrative from Gallipoli to Kokoda: young adventurers going abroad and finding violence. This time they were holidaymakers, not soldiers. Australian tourists never suspected that Bali could erupt in a new conflict where the innocent were the targets.

The October 12, 2002, attack adjacent to Paddy's Bar and the Sari Club ushered in a disturbing period where Westerners were attacked by JI terrorists each year, including at the Marriott Hotel in Jakarta, the Australian embassy (2004) and a second Bali bombing (2005).

Australia's response to the Bali attacks brought forth its better qualities. Critically, Australians did not blame the Indonesian nation whose citizens were also victims. The Anzac spirit was evident -- compassion in death, unity in tragedy, resolution in the face of intimidation. It was one of John Howard's finest hours as prime minister.

Howard travelled to Bali, comforted the grieving but legitimised their anger. "We'll get the bastards" was his private pledge to weeping families. Later at the Parliament House memorial service, conspicuously a religious service, Howard said Australians were "as tough as tungsten" but also "a soft and loving people who will wrap our arms around those who have lost so much".
It was an attack on Australians (known to frequent the Sari Club) but not our homeland. This was not a repeat of the 9/11 attack on the US the previous year. Howard, unlike George W. Bush, did not demonise or divide. He knew what the national interest required -- reaching out to Indonesia in collaboration.

Explaining his response to this writer, Howard said "reason controls anger" and that it would be a mistake to "give the impression of having lost control of your reason".

A decade later, however, the power of reason remains limited in grasping the meaning and aftermath of the Bali bombing.

It is a shocking truth that Australians are largely ignorant of the fate of the Bali murderers. The 2012 Lowy Institute poll showed that 83 per cent of the public felt the Bali bombers have either not been brought to justice "at all" (22 per cent) or were only "partly" brought to justice (61 per cent). Only a tiny portion, 11 per cent, said justice had been "fully" delivered.

Australian National University Indonesia expert Greg Fealy says: "All of the main participants have either been arrested and brought to trial or been killed. There is no excuse for Australians not knowing what has happened."

Indeed. Yet Australians have been deluded and confused about Indonesia for the past half century. Is it any surprise we are deluded about whether justice has been delivered to the Bali bombers?
"Indonesia's counter-terrorism effort was remarkably successful," Fealy tells Inquirer. "JI as a terrorist organisation has been largely destroyed. At the time of the bombing, I don't think anybody would have predicted the level of success that has been achieved. I think over the decade about 750 people have been apprehended.

"The depth of the relationship between the Australian Federal Police and their Indonesian counterparts has been unprecedented. This has been an important part of the story."

This was an outstanding example of a mutual crisis bringing Australia and Indonesia closer together. Don't think it was inevitable given the huge tensions over East Timor three years earlier. Many things could have gone wrong. Howard says political ties at that time were "quite cool".
But Howard immediately spoke to then president Megawati Sukarnoputri and they agreed on a strategy of co-operation.

The pivotal factor, however, lay in the close ties the AFP had built with Indonesia in the years before the bombing and the personal relationship between AFP chief Mick Keelty and the Indonesian officer, I Made Mangku Pastika, appointed to lead the inquiry into the attack.

From the start Keelty had AFP specialists on the ground amid the chaos of burned and mutilated bodies. Howard said it was the "extraordinary relationship" between the two police forces "which resulted in the capture and later conviction" of the planners and perpetrators.

The moral is that investment in institutional and personal ties is crucial in the Australia-Indonesia connection. This must be an enhanced national priority.

But Bali had another significance -- it brought then security affairs minister Susilo Bambang Yudhoyono, a future president, into play, where he was dealing with a range of Australians: Howard, Keelty, foreign minister Alexander Downer and ASIO chief Dennis Richardson. "This began our long involvement with Yudhoyono and it contributed to his pro-Australian outlook," Howard tells Inquirer.

For years virtually every Indonesian operation against JI had an Australian police or intelligence role in the equation. The leading bombers were executed by firing squad. Our intelligence agencies, ASIS and ASIO, deepened their links with Jakarta.

"This co-operation put more ballast into our ties when relations had been in a bad space after East Timor," Peter Jennings, head of the Australian Strategic Policy Institute tells Inquirer. "The legacy of the bombing drove this vital co-operation when there were so many other points of difference: drug mules, asylum-seekers and live-cattle exports."

The real legacy, however, is mixed. On the negative side Indonesia had two great burdens -- in the 1990s it was exposed by the East Asia financial crisis as an unreliable economy and in the next decade it was exposed as having an Islamic terrorist problem. It was a crippling double burden.
Australian business turned away from Indonesia. Then Islam emerged as a new cultural dividing line. "After Bali the travel warnings about Indonesia made it almost impossible for schools and universities to send students," Fealy says. "The warnings were retained for too long. The focus on Indonesian studies was damaged." Indonesian language study entered a sharp decline in Australia. Relations became too dependent on government-to-government ties though, fortunately, this was a good news story.

In 2004 Yudhoyono became President. In a gesture of respect, Howard invited himself to the inauguration. A few months later more than 300,000 Indonesians were killed in the Boxing Day tsunami and Australia offered a $1 billion aid package, the largest in its history. In 2006 a new agreement on security, the Lombok Treaty, was concluded. In 2009 Yudhoyono was re-elected and in 2010 he became the first Indonesian President to address the Australian parliament.

Each of these events was a milestone. Yudhoyono offered immense hope -- saying that Indonesia now saw Australia in a different way -- yet the shadow remained. In a speech of remarkable honesty Yudhoyono appealed to both nations to "expunge these preposterous mental caricatures" of each other. He meant those Australians who still saw Indonesia as "a military dictatorship or hotbed of Islamic extremism" or nothing beyond "a beach playground with coconut trees" and, on the other hand, those Indonesians who were "Australiaphobic".

The Gillard government says the Australia-Indonesian relationship has never been stronger. This is a half-truth. There is goodwill, much dialogue and strong government-to-government contact.
"But there is a hollowness in the relationship," Fealy says. "We don't have ministers who enjoy close personal ties, who have a genuine interest in Indonesia, unlike 20 years ago."

Among the public, suspicion of Indonesia is still deep. Who is the Indonesian with the most recognisable face in this country over the past decade? It is not Yudhoyono but that prophet of violence and JI's spiritual leader, Abu Bakar Bashir, who has been periodically arrested and is now imprisoned.

The 2012 Lowy Institute poll measuring public warmth towards other nations had New Zealand top at 85 degrees with Japan at 70, South Korea 61, China 59, India 58 and Indonesia lagging at 54 (up from 50 back in 2006). At least this year it was ahead of Burma on 50 degrees. So we are more warmly disposed to authoritarian China than democratic Indonesia.

Yet Indonesia is the world's third largest democracy. Its transition from autocracy to democracy is probably unrivalled in any other Islamic nation. One suspects with the rise of China that Indonesia has less profile in Australia. This is bad news. It recycles an old Australian prejudice: you focus on Indonesia when things go wrong. It is entrenched in Australia's media culture. In reality, Indonesia has been a good news story for some time -- a revived economy, a growing democracy, a pro-Australian President. And you can almost predict the next trap.

"It has been a number of years since the last serious terrorist attack," Jennings says. "We need to avoid thinking terrorism was last decade's problem. The risk is people will believe the terrorism problem has been solved."

It is diminished but still exists. The good news in terms of the global struggle against violent jihad is that the most progress has been made in Southeast Asia, our own region. The bombing fed directly into Howard as a national security prime minister. He orchestrated the Bali response and it was superior to his 9/11 response that led to the Iraq war.

The legacies of 9/11 and Bali were partly in contradiction. The former drove our roles in the Iraq and Afghanistan wars. This investment, notably in Afghanistan, has diminished the resources and energy devoted to the immediate region. Jennings says these wars have "upset and disrupted" our priorities.

It is time to reinvest in the region. That means, above all, seeking a true strategic partnership with Indonesia.by: Paul Kelly, Editor-at-Large  From: The Australian