Singapore a model for Chinese democracy 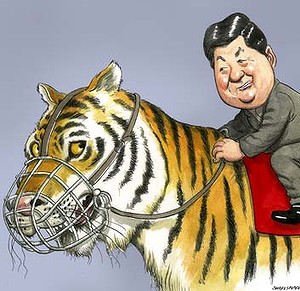 China's incoming president, Xi Jinping, will take power formally in three weeks, yet he's given no public hint of his plans. But he gave an intriguing glimpse to the Westerner he's spent more time with than any other.

After a total of 10 days together across a year or so, Xi left the US Vice-President, Joe Biden, with one clear impression. He does not think that China's political system can continue indefinitely, according to people Biden has briefed.

But while the inheritor of the one-party dictatorship does not think it will last in its current form, neither does he have a clear idea of what should replace it, Biden said.

If Xi (pronounced Shee) is thinking about a roadmap for China's political future, last week provided a clue of a possible destination - Singapore.

An article in a Chinese magazine called Study Times held up Singapore's system of pseudo-democracy as a possible model for China.

So what, you might reasonably ask, does that tell us about Xi's thoughts? The journal is published by the Communist Party's Central Party School, whose president is Xi himself. It's the party's leading policy journal.
''For several years, Xi has led a team investigating the Singapore model and envisaging how it might be applied to China,'' reports Jonathan Manthorpe of the Vancouver Sun.

His tyre-kicking included a 2010 meeting with the owner and builder of the Singapore model, Lee Kuan Yew, whose son has been entrusted with the keys and is now taking it for a drive as Prime Minister.

Exactly what is the attraction of a city-state that has been variously described as an illiberal democracy, a liberal authoritarian state and Disneyland with the death penalty?

The piece in Study Times explains the attraction for China's leaders. ''Since 1968, the People's Action Party has won consecutive elections and held state power for a long time, while ensuring that the party's high efficiency, incorruptibility and vitality leads Singapore in attaining an economic leap forward,'' writes Song Xiongwei, a lecturer at the Chinese Academy of Governance.

Lee deservedly gets credit for building a thrusting first-world economy from a malarial third-world swamp.
Xi might be looking at Singapore's past as China's possible future. A political scientist at China's Renmin University, Zhang Ming, says: ''The Singapore model has been admired by most Chinese leaders and Xi might see Singapore's success as the dreamed accomplishments of his rule in coming decade,'' according to the South China Morning Post.

Lee Kuan Yew is a shrewd character who created the appearance of a Western-style liberal democracy where, in theory, power is contestable but, in fact, one-party rule is protected. He's done this by altering a couple of key design details. When an opposition politician criticises a government minister, the minister commonly sues for defamation. Singapore's helpful courts award such crushing damages that the opposition politician is bankrupted and some have been forced into exile to avoid jail.

Singapore's media is closely guided by the government. Internet censorship and monitoring is highly developed. And the ruling party maintains a subtly coercive role in managing the value of the typical family's most valuable asset, the family home.

How? Most citizens buy flats in government-built and government-maintained apartment blocks. Blocks whose residents dare vote for the opposition live under explicit threat of having their essential upgrades put at the bottom of the work program.

Hey presto. A parliamentary democracy where no one is dragged away in the middle of the night by the secret police, yet one where few are brave enough to speak out and even fewer get away with it. Even today, the PAP holds an astonishing 81 out of the 87 seats in parliament.

A more charitable description of Singapore is that it's a Confucian democracy, with a benign all-knowing patriarch presiding over a meritocratic civil service and a successful government-led capitalist economy.

For China, it's a potential halfway house between authoritarianism and liberal democracy. Could the governance system of an extended shopping centre with a population of 5 million be successfully applied to a sprawling civilisation of 1.3 billion? It's an intriguing question.

Whether Xi has yet found an answer of how to reform China's political system, he is surely asking the right question. Problems are mounting in China and the political system allows the people neither satisfaction nor safety valve.

While the people recognise the rapid rise in national prosperity, they are increasingly dissatisfied with the side effects.

Eighty one per cent of Chinese people agree with the proposition that the ''rich just get richer while the poor get poorer'', according to a study published this month by the Pew Research Centre, a pollster in Washington.

Trust in the value of hard work is eroding. Forty-five per cent of middle-class Chinese disagree with the thought that ''most people can succeed if they are willing to work hard''.

Pew reports: ''In another sign that many do not see a level playing field in Chinese society, there are growing worries about corruption. Half now say corrupt officials are a very big problem, up 11 percentage points since 2008.''

Their concern, presumably, would grow if they were allowed to read the The New York Times investigation into the wealth of the family of the outgoing Premier, Wen Jiabao, whose close relatives are estimated to have controlled assets worth at least $US2.7 billion ($2.6 billion).

The story has been censored in China and denounced by the Ministry of Foreign Affairs as a smear.
And the extended family of Xi himself is estimated by the US financial news service Bloomberg to have $US376 million in assets. Bloomberg says none of these is owned by Xi or his immediate family and says that there is no indication Xi is guilty of any wrongdoing. This story was censored too.

Winston Churchill said that dictators ride tigers they dare not dismount. How daring is Xi Jinping?