Nazi Mania, ‘Hidden’ Jews & the unintended consequences of the Dutch in Indonesia

The filmmakers behind the Empire project on why colonialism still matters

It takes a moment before the reality of modern-day Jakarta catches up with our research-oriented minds. Stimuli upon stimuli rush by our car window: skyscrapers, traffic, shopping malls, billboards, neon. We’re enduring this urban assault for a single night; tomorrow we’ll be thrown back into the past when we fly to the fog-filled rice paddies of the Minahasa region in North Sulawesi to start filming our documentary.

It’s early 2011 and we’ve come to Indonesia in search of a Rabbi and a Nazi. This colorful pair, should we find them, are poised to be the lead characters in the latest chapter of Empire, our global documentary project. Empire is an ongoing investigation into the unintended consequences of Dutch colonialism. Rather than focusing on physical remains like forts or shipwrecks, we look at the human-scale side effects of colonial domination. Colonies were formed to generate profit for the colonizing country, but they yielded unexpected results in the form of hybrid cultures, convoluted religious practices, and new ethnicities. All of the work in Empire arises from a pressing question: if residue from the Dutch colonial endeavor is still impacting our lives today, what can that tell us about the future effects of today’s global capitalism?


There are many other ‘hidden’ Jews in Indonesia

We find the Ohel Yaakov synagogue tucked away behind a volcano in the middle of Minahasa. The synagogue is really just a small room covered by a red roof, which makes it look like a gnome’s house between the overwhelming tropical green that surrounds us. We’re here to talk with Yaakov Baruch, the young Indonesian responsible for revitalizing the Jewish community in North Sulawesi—and all of Indonesia, as there are almost no practicing Jews in the country. Yaakov tells us that he inherited his Jewish lineage through his Dutch ancestors. He claims that there are many other ‘hidden’ Jews in Indonesia, but that many are unaware of their heritage. 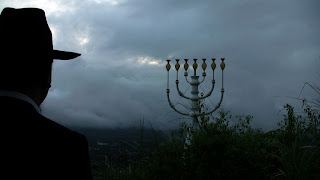 Video still taken from the Empire Indonesia film. Yaakov contemplates life in front of a giant Menorah. North Sulawesi, Indonesia. Credit: Eline Jongsma and Kel O’Neill, 2011
Yaakov Baruch is not a real name. Although he is willing to show his face on camera, Yaakov is trying to keep a somewhat low profile to avoid conflict. Judaism is not one of Indonesia’s six government-approved religions, and Indonesians are no strangers to violent outbursts of religious intolerance. Yaakov’s assumed name not only keeps him safe, but it also allows him to engage in a type of identity theater. By embracing his Jewish ancestry and religious practice, he flaunts his difference from the majority. Bullied as a child, he now uses his paler skin and vaguely Caucasian features to his advantage. ‘I’m proud,’ he says.


The glorification of whiteness takes an interesting turn

Even though Yaakov was ridiculed for his looks, fair skin seems to be admired everywhere we go in the country. There are skin-whitening ads on TV during every commercial break, and pop stars (male and female) look as white as lilies. Even our Indonesian artist friends avoid the sun at all costs. People assure us this has nothing to do with wanting to look ‘European’ but when we return to Java to meet our second subject, Permadi, the glorification of whiteness takes an interesting turn. 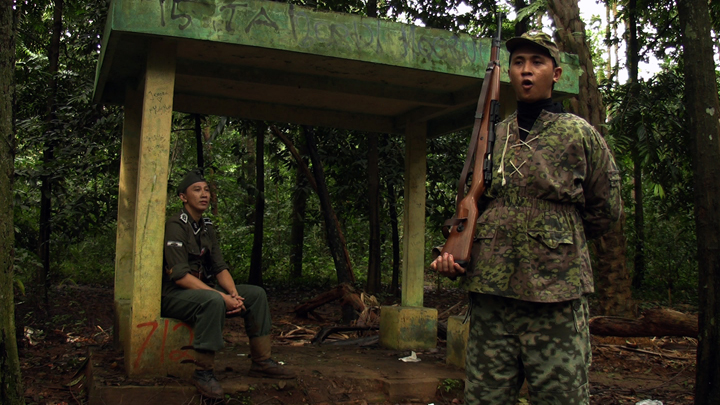 Video still taken from the Empire Indonesia film. Permadi watches one of his soldiers sing a German song. Jakarta, Indonesia. Credit: Eline Jongsma and Kel O’Neill, 2011
HS Permadi is a tall, energetic Indonesian in his late 30’s. We track him down in a large park outside Jakarta, where he runs a war re-enactment group called the “Niederlande Kampfgruppe” (Netherlands Battle Group). Permadi and his men get together every other weekend to dress up as Dutch Waffen SS soldiers and act out historic battle scenes. According to Permadi, the Niederlande Kampfgruppe’s war games are based on the lives of about 20 Indonesians who signed up for the Dutch Waffen SS while living in occupied Holland during WWII. Permadi’s men start their practice days by gearing up from head to toe in Nazi drag. Attention to detail is everything: their uniforms even feature a Dutch flag on one arm.
Guessing that Permadi is avenging his forefathers for everything the Dutch did to the country, we ask him about his motives. His answer couldn’t be further from our expectations. Permadi explains that he admires the Europeans, and believes that Indonesians didn’t have a real civilization before the Dutch presence. To him, the Nazis represent the apex of European sophistication. They are a force to be studied and admired.


Indonesians didn’t have a real civilization before the Dutch presence

Others seem to agree. We ask the wife of one of the soldiers if she prefers her husband in a Nazi uniform or in an Allied Forces uniform. She says she likes the Nazi uniform because “It’s sexier!’ After our encounter with the “Niederlande Kampfgruppe” we start noticing a certain Nazi-mania in Jakarta: posters on the street feature Hitler’s portrait; cars are adorned with (non-Buddhist) swastika decals.
We are somewhat shaken by our encounter with Permadi and his men, in part because we have so much fun with them. It’s a blast to run around in the jungle, playing war—or war film director as the case may be. When Yaakov visits us on one of our last days in Jakarta, we feel the need to confess to him exactly who we’ve been spending our time with.
Yaakov’s eyes widen when we tell him about Permadi and his group of Nazi’s. There is a pause, which we take as a sign of discomfort. Finally, he speaks.
“Do they need a Jew to chase?” he asks.

Yaakov is serious, but the meeting never comes together.
View videos at http://www.indisch3.nl/2012/08/17/nazi-mania-hidden-jews-the-unintended-consequences-of-the-dutch-in-indonesia/