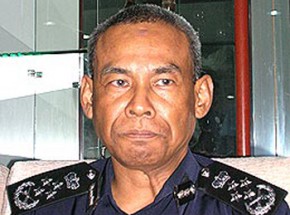 What did Musa Hassan know, and when did he know it, and did he intend to tell it?

What happened to Musa Hassan on his way to Bangkok – if indeed he was going? The retired national police chief was said to be giving a press conference with “new revelations” in the 2006 murder-for-hire of Mongolian beauty Altantuya Shaariibuu by two elite bodyguards for then-defense minister Najib Tun Razak.

But within an hour after the Foreign Correspondents Club of Thailand sent out a press release announcing the event, scheduled for today at noon, someone called and cancelled it.

Musa was quoted in the Kuala Lumpur-based Star daily newspaper saying he would be in Kuala Lumpur today and that “I am not giving any press conference on any matter. I want those spreading such lies to stop it immediately.”

Was this a case like that of Wang Lijun, the Chongqing police chief who made a highly publicized run for the US Embassy in Chengdu in February this year with details of the crimes of his boss, Chongqing Mayor Bo Xilai? That is a case that has shaken Chinese politics to the core.

Pursued by a string of police cars, Wang stayed in the US Embassy long enough to raise suspicions across the country about the misdoings of Bo and his wife, Gu Kailai, and then passed on details to the government in Beijing.

In the FCCT press release, it was announced that after Altantuya’s death “it was revealed that she had been linked to the sale of two French-made submarines to Malaysia for US$1.3 billion – a deal under heavy suspicion of high-level corruption. The current Malaysian PM, Najib Razak, was then Minister of Defense and the national police chief was Musa Hassan. The revelations shook the Malaysian political landscape.”

The incident remains extremely mysterious. Unlike that of Wang Lijun, it has received little mention in Malaysia’s mainstream media, all of which are owned by pro-government political parties.

“Nobody’s saying anything,” said another Kuala Lumpur source. “It’s like it never happened.”

As Malaysia’s national police chief, Musa is intimately familiar with all of the details of the murder of the 28-year-old Altantuya. But, sources in Kuala Lumpur say, suspicions that he might deliver lurid allegations of Najib’s involvement in the case are probably unfounded.

The mystery “hasn’t made much, if any, impact as yet on the Malaysian scene,” a veteran political observer in Kuala Lumpur said. “There is so much spin going on from both sides, the public is sceptical. Furthermore, Musa has denied it and many people I spoke with think that this was probably just an Anwar spin,” a reference to Opposition leader Anwar Ibrahim. “I don’t think it’s going to have the same impact as Wang and Bo Xilai. It’s just another day in Malaysia’s gutter politicking.”

However, Musa appears to have been at least disaffected by the political environment, another source said. The police chief, who retired at age 60, reportedly was promised a plum job as Malaysian high commissioner to Brunei. When he didn’t get it, he was forced to take the teaching job.

Local media reported earlier that Musa has been flirting with Parti Islam se-Malaysia, the fundamentalist Islamic component of the three-party opposition. Musa, however, has publicly denied he intended to join PAS. A source with Pakatan Rakyat told Asia Sentinel Musa had met with a top leader of PAS several months ago, but that the former police chief had no interest in politics and that it was unlikely he would join. He himself told The Star today he had no intention of joining any parties.

Musa retired on Sept. 13 after 41 years of service, the last six as national police chief. He has long been a controversial figure, having been investigated himself on allegations of corruption, particularly over the release of three members of illegal betting syndicates. Reform critics have accused him of using his police power to thwart investigations into corruption and to protect powerful figures in the government.

The episode also calls up one in July 2008 when a Kuala Lumpur-based private investigator, P. Balasubramaniam, retracted an explosive sworn statement alleging that Najib was involved with Altantuya before she became the mistress of Abdul Razak Baginda, Najib’s best friend. Instead, Balasubramaniam said he had made his original statement under duress from Anwar’s associates. He then fled the country, still later saying he had recanted under duress and had been offered RM5 million to shut up by Deepak Jaikishan, a reputed business partner of Najib’s wife,. Rosmah Mansor.

Last week Musa dropped a 2008 defamation suit against Opposition Leader Anwar Ibrahim after Anwar accused him and Attorney General Abdul Gani Patail of conspiring to cover up a 1998 physical assault which left the then-imprisoned Anwar with a black eye and a permanent back problem. The dropping of the suit also fueled speculation that Musa was moving towards a rapprochement with the opposition. However, an opposition leader said the PR leadership was convinced he dropped the suit because he knew he wouldn’t be able to win it. Asia Sentinel