Pakistan’s political leaders need the courage of 14-year-old Malala to stand up to the Taliban. 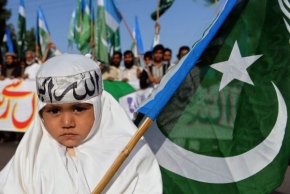 PAKISTANIS have united in outrage over the Taliban's attack on 14-year-old Malala Yousafzai, who campaigned for girls' education and became a prominent symbol of defiance against Islamist rule.

Gunmen boarded a school bus last week, asked for Malala by name, and shot her in the head (she is now in a British hospital). A Pakistani Taliban spokesman defended the attack, justifying it because Malala was promoting ''enlightened moderation''. He said they would attack her again if she recovered.

So, as Malala fights for life, I have a question: Will this atrocity finally push Pakistan's military and ISI intelligence agency to reject the militancy that pervades the country? Will Pakistan's leaders acknowledge that they can't fight certain Taliban groups while providing safe haven for other groups that are useful to them as tools against their arch enemy India?

Malala's story shows how shortsighted, indeed suicidal, that approach is for Pakistan, where militants want to take over a nuclear-armed country. As the Pakistani daily The News put it after the shooting: ''Malala Yousafzai is in critical condition today and so is Pakistan.''

I have a personal interest in Malala's case. In November 2009 I visited the beautiful Swat valley, where she and her family lived, and which had fallen prey to the Taliban. While there, I had a moving conversation with Malala's father, Ziauddin Yousafzai - a human-rights campaigner who ran an independent school for girls.

With its mountains and waterfalls, Swat had once been a tourist destination, a place where generations of Pakistanis went for their honeymoons. But in 2008, a vicious group of Taliban moved in from the adjacent tribal areas and virtually took over the valley.

They shut down girls' schools, including the one run by Yousafzai, cut off the heads of anyone who challenged them, and murdered women. At this time, 11-year-old Malala started writing an anonymous blog for the BBC about life under the Taliban.

The residents felt abandoned by their political leaders. Indeed, during a visit to Pakistan in April 2009 I had watched in amazement as the parliament endorsed a deal with the leader of the Swat militants that would have conceded them the valley. The only thing that saved the people of Swat was that the Taliban started marching towards Islamabad a week after the deal was signed. The parliament quickly rescinded the pact, and the Pakistani army mounted a massive assault on the militants, pushing them back.

By the time I arrived in November, the militants were no longer visible, but people there were still nervous. They felt trapped between the militants and the military.

Local merchants were convinced that the Taliban couldn't have grown so strong if the military and ISI hadn't coddled them. ''When the dragon becomes too large,'' one told me, asking for anonymity, ''it eats its own. There are still some Pakistani agencies who have a soft spot for the Taliban.''

I sat in the garden of a local architect's home, talking with prominent Swat civic leaders, including Malala's father. He told me that even after the army supposedly vanquished the Taliban and he went to reopen his school, he was afraid the Taliban would kill him. He slept every night in a different house.

''We had terrorists in our valley,'' he told me. ''They wanted to negate our right to culture and poetry, and they wanted to destroy the special musical heritage of our valley. They want to impose their culture on us.''

Then Yousafzai got to the point that most disturbed him: Pakistan's political leaders were failing to tell their own people that the Taliban presented a mortal threat, and could only drag the country backward.

When it came to fighting the Taliban, he said, ''Pakistan's religious parties, even Imran Khan [the famous cricket player turned politician], all say it's America's war, not my war. How can they say this if my children are being killed in Swat?''

This brave man was referring then to the girl students from his school who were at risk from the Taliban. Today it is his own daughter who is at death's door.

Even now I wonder whether Malala's sacrifice is enough to wake the country to the threat it faces. Pakistani journalists tell me the country's religious parties, while denouncing the attack on Malala, have not condemned the Taliban by name. Nor has Imran Khan, who offered to pay for Malala's medical care but still talks of deals with the militants.

Pakistan's top general rushed to Malala's bedside. But Pakistan still harbours the Afghan Taliban leaders who are responsible for the deaths of many thousands of civilians and want to take over Afghanistan after US troops leave. And Pakistan harbours terrorist groups that murder Pakistani Shiites, Ahmadis and Christians

Perhaps the attack on Malala will jolt her country into a new reality. I really hope so. But it won't happen unless Pakistani generals and politicians display the same courage as this young girl.
Trudy Rubin is a columnist and editorial board member for the Philadelphia Inquirer.