Australia’s only bridge to abroad in danger of collapse 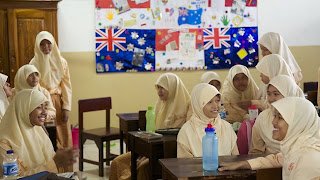 
THE "Asian capability" initiative with the most potential to meet a core objective set by the Asian Century white paper is limping along without guaranteed funding in three of its four country programs.

And Canberra insists state and non-government bodies will carry the burden of the objective that by 2025 all primary and secondary schools, now about 9500, "will engage with at least one school in Asia to support the teaching of a priority Asian language".

The commonwealth -- through AusAID, the Department of Foreign Affairs and Trade and, to a lesser extent, the Department of Education Employment and Workplace Relations -- have so far borne most of the expense of developing Australia-Asia Bridge School Partnerships in four countries.

But the China Bridge program, which links 12 Australian schools and counterparts in two Chinese provinces, has lost its main source of federal funding and will have to be wound down unless alternatives are found. South Korea Bridge and the Thailand partnership, which has yet to start operation, have secure funding only for the rest of this financial year.

Only the largest and best established Bridge program, linking a total 256 Australian and Indonesian schools, has guaranteed multi-year funding, from AusAID through to 2015.

But even that project faces a financial struggle. The Myer Foundation is preparing to wind-up its involvement in December, leaving Bridge Indonesia without the $250,000 annually it needs to send Australian teachers to courses at their Indonesian partner schools.

Established in 2008 from a pilot by the DFAT-sponsored Australia-Indonesia Institute, Bridge is the only comprehensive and co-ordinated program capable of meeting the white paper's objective of engaging students and teachers with Asian counterparts.

The program uses various online methods -- broadband, Skype, Wiki and even mobile phones -- to bring the children into weekly, sometimes daily contact. But, at the outset the program relies heavily on teachers visiting their partner schools for familiarisation and training.

In the case of Thailand and South Korea, the cost of each Australian teacher visit is about $5800, of which the program developer and administrator, Melbourne University's Asian Education Foundation, advances the first $5000 from the country funding.

At Madrasah Tsnawiah Negeri No. 3 junior high school in South Jakarta teachers and students are readying for a visit to their partners at Macarthur Anglican School, at Cobbitty on Sydney's southwestern outskirts, starting this weekend.

"We also visited Australian from March 8 to March 28, 2011 and then in November, two teachers from our sister school visited here," said teacher Nuryadin, who co-ordinates the Tsanawiah Negeri Bridge program.

But unless replacement money is found for the Myer Foundation's funding, the Australian teachers' visits will have to come to a halt says Australia Indonesia Institute chairman Tim Lindsey. by: Peter Alford, Jakarta correspondent ‘The Australian’