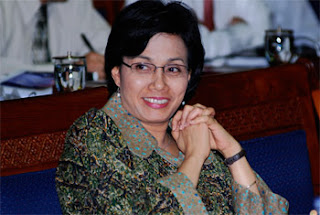 When I picked up a newspaper the other morning and read that Golkar was considering former finance minister Sri Mulyani Indrawati as a running mate for its presidential candidate Aburizal Bakrie, I almost choked on my wheaties.

I mean, what has Golkar been smoking — or, for that matter, some of the commentators who actually think it is possible? Perhaps they believe in Napoleon's saying: "In politics, an absurdity is not an obstacle."

Back in May 2010, it was Aburizal and his political cohorts who drove Sri Mulyani to resign from President Susilo Bambang Yudhoyono's Cabinet and into her current well-paying job as a managing director at the World Bank, where she is doing just fine.

Two months earlier, a parliamentary inquiry had made her and Vice-President Boediono, the former central bank governor, the target of a criminal investigation for directing the 2008 bailout of little-known Bank Century, which cost the state US$710 million.

Hollowed out by its corrupt owners, the pair have always insisted that they made the difficult decision to save Century to head off a feared meltdown among 20 smaller banks — similar to that which occurred during the 1997-98 Asian financial crisis.

Now, two years after that event, Golkar has her on a list of possible vice-presidential candidates for 2014. Clearly, no one even bothered to ask Sri Mulyani.

When I sent her the story, she declared herself "speechless" — as well she might.

Media memories appear short as well. One newspaper which carried the original Antara news agency report failed to grasp how ludicrous the whole idea was, calling a Bakrie-Sri Mulyani ticket an "intriguing if unlikely pair."

But not everyone in Golkar is on the same page. Golkar stalwart Marzuki Darusman dismissed the proposed 2014 team as a "sick joke," and deputy party chairman Fadel Mohammad noted politely that Sri Mulyani wouldn't be a good fit for the party platform.

Marham was, in fact, the head of the committee of inquiry into the bailout, and Santoso, as Golkar's oft-quoted spokesman at the time, was a frequent critic of Sri Mulyani and Boediono, even if their reputations were and are above reproach.

After Sri Mulyani's resignation, it was Santoso who blithely announced that the legal process against her was being suspended, saying she had overreacted and should be grateful she was getting a "soft landing" and not being made a scapegoat.

But the case has refused to go away, perhaps because it is seen as a useful political weapon to keep Yudhoyono off balance. Only last month, the Anti-Corruption Commission (KPK) said it will name suspects in the case by December.

Still, it may not be so surprising that Golkar is casting around for a younger running mate to partner the 65-year-old Bakrie. He continues to trail badly in polls behind retired general Prabowo Subianto and ex-president Megawati Sukarnoputri.

More than 82 percent of Indonesians are under 50 years old, including 42 percent of voters between 18 and 30. Yet, like Bakrie, the only prospective presidential candidates so far are all familiar 60-something figures from the Suharto era.

Certainly the surprise victory of Solo mayor Joko Widodo, 51, in the recent Jakarta gubernatorial elections has reenergized those Indonesians who still cling to the belief that somewhere out there is a proverbial white knight waiting to be unleashed on the electorate.

That yearning is understandable when not only are parties failing to act as conduits for aspiring national leaders, but also so many new-generation politicians are being chewed up and spat out by the meat grinder that is Indonesian politics.

Look no further than jailed Democrat Party treasurer Muhammad Nazarrudin, 34, and Australian-born legislator Angelina Sondakh, 34, both convicted in a single graft case that has laid waste to Yudhoyono's party.

Forty-something Democrat chairman Anas Urbaningrum is under a similar cloud and may only be staving off the inevitable. Sports Minister Andi Mallarangeng, one of only four ministers under 50, has been so badly tainted by the affair that his future is also in doubt.

In this depressing climate, it is not at all clear whether Sri Mulyani could ever be tempted to return to such a shark pool from a job where she is appreciated and, ironically enough, brings great credit to Indonesia.

But while she has alluded to what she believes was the conspiracy of vested interests that led to her resignation, she has never had anything nasty to say about her country and returns frequently on business trips and to visit family and friends.

No doubt aware of the folly of burning bridges, Sri Mulyani is not nearly as apolitical as she may seem and, at the still-tender age of 50, there is time yet. After all, if 2014 is not the presidential election which sees the changing of the guard, 2019 surely will be. By John McBeth- Reprinted courtesy of The Straits Times