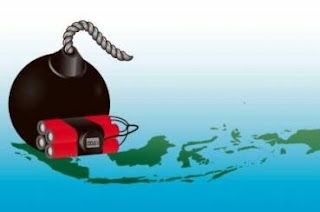 To capitalize on recent arrests, Jakarta must upgrade its surveillance and financial tracking tools.

The swift and near-simultaneous arrests late last month of 11 individuals allegedly preparing to bomb U.S. and other Western targets throughout Java, Indonesia's most populated island, should serve as a wake-up call to Asia's national security establishment, lawmakers and leaders. The foiled plot would have been just the latest in a flurry of terrorist activity by members of Islamist organizations, all of which are registered and legally sanctioned by the Indonesian government.
During the arrests, Indonesia's elite counter-terrorism squad found explosive material, a bomb-making manual, detonators and a list of targets that included the American and Australian embassies in Jakarta and the American consulate in Surabaya, according to Indonesian government officials. Each of those arrested appears to be a card-carrying member of the Sunni Movement for Indonesian Society, also known as Hasmi, an obscure Islamist organization few had heard of previously.

The group denies any terrorist activities or links to those arrested. In the wake of the raids, leader Adi Mulyadi told the media that "Hasmi is a non-violent organization and we focus on preaching." However, counterterrorism experts say the group is linked to Indonesia's Islamic Defenders' Front, an Islamist organization known for hate crimes. Hasmi has engaged in demonstrations against Christian churches in West Java and Israel. The ultimate objective of Hasmi, like other Islamist organizations, is to create an Indonesian Islamic Republic based on sharia law.

The recent arrests come on the heels of other planned attacks in Indonesia. In September, law-enforcement officials revealed they had uncovered cells throughout the country with links to Jemaah Ansharut Tauhid (JAT), a well-known Islamist organization whose leader, Bakar Basyir, is also reportedly the spiritual leader of Jamaah Islamiah, the al Qaeda affiliate that operates in large swaths of Asia. According to National Police spokesman Brigadier General Boy Rafli Amar, two of the detainees from the September raids had plans to bomb Jakarta's parliament and kill members of the country's law-enforcement community. "They recruited, invited young men to be trained in a military-style jihadi camp and bought bomb-making materials," he said
All told, in the last half year, Indonesian counterterrorism officials have arrested nearly 50 militants for plotting attacks targeting foreigners and Indonesians. The groups whose members have been arrested — Hasmi, the Islamic Defenders' Front and JAT — are all sanctioned by the government and free to operate as they wish. It now appears that militant Indonesian groups not hitherto engaged in overt violence are crossing the divide and using low-intensity conflict and other terrorist tactics to achieve their objectives.
What can Indonesia do in response? As a start, Jakarata should blacklist terrorist organizations and their members, ensuring that law enforcement and intelligence services can track them and providing the judiciary with the authority to put them behind bars.

This hasn't happened the way it should so far because, for domestic reasons, Jakarta appears to be pandering to radical Islamists. The international community until now has placed much of the blame at the feet of the country's president, Susilo Bambang Yudhoyono, who many believe has looked the other ways as militants have attacked minority groups, including Christians, Shiites and Ahmadi Muslims.
Indonesia should also shore up laws that place controls on its financial sector to protect against abuse by illicit actors. According to the Financial Action Task Force (FATF), which combats money laundering and terrorism financing, Indonesia has strategic deficiencies in these areas that need to be addressed expeditiously. In the FATF's view, Indonesia has yet to adequately criminalize terrorism finance or establish procedures to identify and freeze terrorist assets.

Since February 2010, Jakarta has been promising to work with the FATF and other international organizations such as the Asia Pacific Group to redress this problem, but meaningful steps have yet to be taken. These laws must be passed and enforced if Indonesia is to curb the militant Islamist threat. Failure to do so sends the wrong message to terrorists, their financiers and the international community.

Finally, law enforcement and intelligence analysts must become proficient in the innovative tools developed in the last decade, including geospatial and network analysis tools, to attack networks and uncover financial links. Palantir, Analyst's Notebook, ArcGIS, and Google GOOG +1.90% Earth — tools many government officials do not use or are not even aware of — make it easier to manage and sort through vast reams of data. They also facilitate the tracking of financial flows and smuggling routes. Ignoring these innovations hampers the ability to capture members of rogue organizations and put them behind bars.

In the last decade, Indonesia has been a staunch ally of the U.S. and other Western democracies in the war against terrorism. It has arrested and ultimately jailed hundreds of rogue actors who intended to engage in attacks around the globe. Many countries and policy makers admire Indonesia's outstanding record and its demonstrated desire to challenge the threat of terrorism.

Yet in order to ensure continued success, it is critical that Indonesia blacklist organizations engaging in violence, protect its financial sector from abuse and provide its analysts with the tools they need to track and capture those who mean citizens harm.

By Avi Jorisch, a former U.S. Treasury Department official, is a senior fellow for counterterrorism at the American Foreign Policy Council in Washington, D.C. The Wall Street Journal