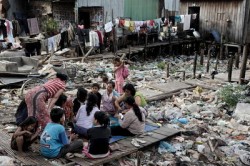 On 18 October, Cambodia lost its bid for a non-permanent seat on the UN Security Council to South Korea.

The vote in the General Assembly saw South Korea receive 149 votes to Cambodia’s 43. The loss was a significant blow, as Phnom Penh has long coveted a seat on the Security Council as part of its insatiable quest for international acceptance. But it is not only that Cambodia has a chequered past that should not be ignored – its present-day human rights record is also woeful.

Today, Cambodia finds itself slowly becoming a normal country. In some ways, it is facing all the attendant problems normal countries have, such as how to develop equitably and sustainably. But in other ways, Cambodia is still different. In particular, it is a hotbed of trial-and-error donor experiments and international intervention. From 2002 to 2010, for every dollar the country spent from its budget, it received — on average — 94 cents in foreign aid. Aid dependence has become ingrained in Cambodia, especially now that China — whose aid policy has not been characterised by a preoccupation with human rights or good governance — lavishes the country with more soft loans, investments and shady deals than anyone can keep track of.

I argue that this aid dependence has allowed Cambodia to ignore the need to make progress on the rule of law. The human rights violations of Cambodia’s government are severe. In May, a 14-year-old girl was killed by security forces when she and her family resisted eviction during an illegal land-grab; a month earlier, environmentalist Chut Wutty was shot dead in the forests of Koh Kong province while investigating yellow vine, a suspected ingredient used in the manufacture of ecstasy. In September, Hang Serei Oudom, a journalist who asked too many questions about illegal logging, was found in the back of a car with an axe in his head.

The more things change, the more things stay the same. We have seen all this before in Cambodia. Even if donors huff and puff about human rights violations, their bluff will be called by the authorities. The sad truth about foreign assistance is that there is very little credibility to any threats from donor countries and, now with China in the picture, it’s even less likely the authorities will listen to traditional donors.

That is not to say that there is no possibility of achieving human rights goals through diplomacy. October saw the jailing of Mam Sonando, the owner of the last independent radio station in Cambodia, where Voice of America and Radio Free Asia broadcast locally, for 20 years on charges of inciting rebellion. Last time he was arrested, Sonando was in jail for weeks before he was eventually released as a gesture to then US assistant secretary of state for East Asian and Pacific affairs Christopher Hill during his visit on the occasion of the dedication of the new US Embassy in January 2006. Hopefully, Sonando will be released in November as an offering for President Obama’s visit to the ASEAN Summit, which took place on 18–20 November in Phnom Penh. But this would likely have had more effect if the president threatened to cancel his trip unless Sonando were released.

International donors may have limited power when it comes to holding Cambodia accountable for its human rights violations. But a failure to meaningfully engage its critics will not help Cambodia’s already shaky image when it returns to the UN General Assembly to plead once again, next year, for votes in its quest to join the Security Council.

Sophal Ear is an Assistant Professor of National Security Affairs at the US Naval Postgraduate School and the author of Aid Dependence in Cambodia: How Foreign Assistance Undermines Democracy.