Growth: getting Japan back on track 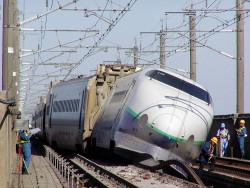 Long before the lost decade it was clear that the Japanese economy would only continue to grow after its ‘miracle’ years if it increased its productivity.

Once ‘catch up’ with the leading economy was complete, domestic technological innovation and continuing structural change are the two main sources of increased productivity.

While there is still debate about the deep causes of the 1990s slowdown, the immediate causes are clear (policy change in 1990), as are the consequences (wealth declines, growth in bad debts and unemployment, falling corporate capital investment, low growth rates and price deflation).
Combined with external shocks and a steadily appreciating yen, it is not surprising that recovery was difficult. A subtler disagreement, however, surrounds the causes of the slower productivity growth. Measurement is part of the problem, because data cannot pinpoint the sources of productivity growth and decline. A demand-driven contraction in output will create a fall in measured productivity until employment contracts. But the data cannot explain whether productivity falls because of poor management or as a result of failure to introduce new technologies. This ambiguity lies at the heart of different interpretations of the outlook for Japan.

Japan’s productivity growth has been slightly above the OECD average since the mid-1990s and does not underperform most of Europe (it only fell behind that of the US economy after the latter’s surge in the early 2000s). Japanese labour productivity grew strongly enough between 1990 and 2006 to compensate for declines in labour supply, leaving average annual GDP per capita growth not far behind that of the United States or Australia. In years to come Japan must address two crucial issues that will otherwise compromise output growth: the dramatic variation in productivity performance across sectors, and declining labour supply.

Japan’s demographic problem is well known but the impact on fiscal deficits, health care and social security spending is not the only dilemma. As the workforce ages and retires there is less labour input to produce output. Each possible strategy to overcome the labour shortage has a degree of political difficulty: raising the retirement age, increasing women’s participation in the labour force, increasing immigration and increasing trade, but they are all possible, so the ageing workforce should not automatically spell an end to economic growth.

Some observers blame declining labour inputs and reduced working hours from the mid-1990s onwards for the lost decades, but it is hard to see this as the major explanation for slow growth since 1991. Even if the potential of the economy was lowered by a reduced labour supply, that cannot explain the GDP outcome when unemployment was increasing. This gives credence to the argument that the economy was operating below its capacity, whatever one judges that capacity to be. But it does not alter the arithmetic for the future: to compensate for reduced labour supply there must be increased productivity from the remaining workforce.

Because quality of service is hard to capture, the data does not reflect high or improving quality at the same price, which should be accounted for in productivity measurements. But another source of the productivity gap with the United States in many service sectors is low levels of investment, particularly in IT and computers. And barriers to entry are high in Japan’s services, which reduces incentives to invest and thus limits new competition from domestic start-ups and from foreign entrants. The benefits from catching up to international levels of services productivity would be significant because research suggests that GDP growth appears to be much more responsive to improvements in services productivity than to additional gains in manufacturing or agricultural productivity.

Japan has a mixed record in policy responses to slow economic performance. The economy has not reached its potential for prolonged periods during the last 20 years. Though there is debate about how big the gap is, it is probable that a persistent gap — however modest — contributes to lower potential. The best policy response would be to work on two fronts: manage demand to minimise the GDP gap because the costs of deviation are large, and raise potential by focussing on productivity improvements.

How that should be done is broadly clear and, though details will matter, some things will probably not matter very much. For instance, improving corporate governance structures won’t make much difference in the absence of other changes. In Japan there are examples of old-style behaviour (Olympus) and of very new models (Rakuten). Other firms, like Sony, have not prospered despite being one of the first to adopt the Western system of external board members with committees. OECD experience suggests that shareholder activism is not a solution to all ills. In fact, Japan’s most successful growth period was under its old corporate governance system, which suggests that changes in governance structures are probably not the only key to improving productivity.

For Japan the next leap in growth can only come from a shift in economic structure just as transformative as the one that took place between 1950 and 1970. This time it will be a shift to a service economy with a small, high-tech manufacturing sector. Most of conventional manufacturing will be moved offshore. There may be a ‘niche’ agricultural sector producing expensive goods adapted to local and specialist tastes, but it should be a part-time occupation and should not have its current hold over politics and trade policy. Trade in both goods and services will play a bigger part than it has so far. There are considerable challenges to setting up a service-based economy.

The first is to change the regulatory framework so firms can easily enter and exit the market. Japan’s own processes for bank resolution — which were perfected during and in the aftermath of the banking crisis in 1997 — could be a model here.

The transition to this new structure will be difficult. There are both distractions and genuine problems along the way. Excessive focus on fiscal restructuring is one distraction; excessive gloom about the ageing population is another. By contrast, changing deep preferences for making things (monozukuri) over providing efficient services as the basis for the economy, and convincing embattled workers, students and managers that their services future will require good language skills and familiarity with the outside world, is a genuine problem that needs to be tackled now.

Japan’s future growth potential is tied to its people’s commitment to internationalisation.

Jenny Corbett is Professor of Economics and Executive Director of the Australia–Japan Research Centre at the Crawford School of Public Policy, the Australian National University.
This article appeared in the most recent edition of the East Asia Forum Quarterly, ‘Japan: leading from behind’.