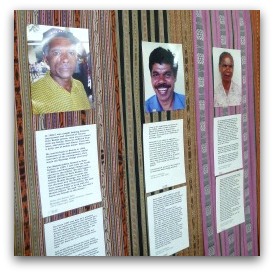 The support group for victims of sexual abuse, Broken Rites, has proposed that victims be given the opportunity to tell their stories as part of the proceedings to be undertaken by the upcoming Royal Commission.

According to the Fairfax press on Monday, the group's spokesman, Dr Wayne Chamely, is advocating that a 'truth commissioner' be appointed specifically for the purpose of listening to victims. The commissioner 'would move around and meet people in their own communities' and carry out this function concurrently with the Commission's other terms of reference.

At the heart of this proposal is a conviction that the Royal Commission must be as victim-friendly as possible if it is to get at the whole truth, contribute to the healing of victims, educate the public about this entrenched issue and its origins, and generate effective recommendations.

Broken Rites is clearly concerned that the Royal Commission may not be able to adequately accommodate victims because some may not feel comfortable testifying in such a setting or will not be heard because the Commission, due to its anticipated huge work load, will have to be selective.

The Comissao de Acolhimento, Verdade e Reconciliacao (CAVR) (or Commission for Reception, Truth and Reconciliation) functioned 2001–2005 and was set up to address the huge number of human rights violations committed 1974–1999, particularly during the Indonesian occupation, including widespread sexual violence.

Its core mandate focused on establishing the truth about these violations, facilitating community reconciliation, and reporting on its work, inquiry, findings and recommendations.

Sensitivity to victims informed every aspect of the CAVR's design, structure, operation and reporting. Its enabling legislation required the commission 'to assist in restoring the dignity of victims' and it employed a number of strategies to achieve this.

Some were procedural, such as consulting victims about the commission's terms of reference and the selection of commissioners, bringing victims together to share their experiences with other victims, recording and preserving victim testimony, and administering an urgent reparations scheme for the most vulnerable victims.

Others were organisational, such as allocating a victim portfolio to one of CAVR's seven commissioners and establishing a victims unit charged with ensuring that the needs and rights of victims were addressed across the commission's activities.

The centrepiece of this victim-friendly approach was listening to victims. For this to work, significant planning, resources and time were invested in preparing communities and victims, particularly women who'd suffered sexual violence, to participate and share terrifying experiences that would have led to recrimination under the previous regime. CAVR teams spent three months in each sub-district for this purpose.

These hearings, particularly the national hearings held in the capital, broadcast live and attended by high-level Timorese, were expressions of solemn respect and solidarity for victims. In addition to providing evidence, the hearings assisted the healing of victims by honouring their contribution both to East Timor's liberation and, through their stories, to the building of a culture of human rights, non-violence and rule of law in the new nation.

The material gathered has been archived and disseminated in multiple languages in video, print and other formats to help East Timor's booming youth population appreciate the sacrifices made on their behalf and to benefit from the lessons learned from this deeply traumatic period.
Indonesia, home of the principal perpetrators, did not interfere with the process.

The CAVR methodology was not perfect and, in retrospect, could have been even more victim-friendly. Some of its core recommendations, including a call for a reparations program, have not yet been implemented seven years after being tabled in the East Timor parliament, a source of considerable disappointment to aging victims.

Two principal conclusions can be drawn from the East Timor experience for Australia's Royal Commission. First, a victim-friendly process is desirable, achievable and productive. If East Timor after decades of war and devastation could do it, Australia certainly can.

However victims should not take for granted that the high level of public and political support the Royal Commission proposal currently enjoys will translate into implementing its recommendations down the track. CAVR enjoyed similar levels of support at its inception. Sadly, East Timor's experience is that victims need to organise and mobilise if they are to see their recommendations implemented.
Pat Walsh worked in East Timor for ten years, mostly as part of the Commission for Reception, Truth and Reconcilation. The UN recruited him to help establish the Commission and he served variously as its executive director and special adviser. Eureka Street article