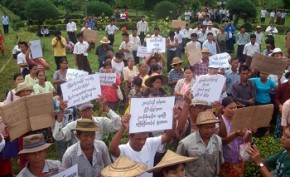 Following the Burmese government’s suspension of a controversial joint-venture hydroelectric dam project with China in the far north of the country, another flashpoint has emerged in relations between the two countries – a massive copper mine at Latpadaung, a mountain near Monywa northwest of Mandalay in Upper Burma.

The Myitsone hydroelectric project, being built to supply power to China, was cancelled in the face of strong local resistance. This time, local residents are protesting against a Chinese company. Wanbao Mining, a joint venture with the Burmese military’s main commercial enterprise, Union of Myanmar Economic Holdings, or UMEH. Wanbao has been accused of destroying cultivated fields, polluting nearby water sources and desecrating Buddhist shrines. No less than 3,150 hectares of land from 26 surrounding villages were confiscated for the project.

The public outcry could also force China to rethink its often insensitive – some would say aggressive – policies towards smaller countries in the region.

UMEH’s involvement is merely as a recipient of fees from Wanbao, a subsidiary of the North Industries Corporation, or Norinco, China’s main weapons manufacturer which is also involved in other business activities.

When the agreement between Norinco and the government of Burma was signed 10 June 2010, the Chinese company said on its website that Monywa is “abundant in copper mine resources with excellent mineral quality, which is of great significance to strengthening the strategic reserve of copper resources in our country, and to enhancing the influence of our country in Myanmar (Burma).”

That influence is now on the wane as Burma tries hard to distance itself from China - which for more than two decades has exerted considerable economic, political and even military influence over this Southeast Asian country - while improving political relations with the United States, the European Union and Japan. But after last year’s suspension of the US$3.6 billion joint venture Myitsone dam project in the northern Kachin State, which shocked the Chinese, Burma must tread carefully in dealing with Wanbao Mining. For the country’s new leaders, it is a dilemma: They cannot crack down on the movement in Monywa without risking its still tenuous relationship with the West. But a continuing struggle could impact relations with Burma’s powerful northern neighbor.

The campaign against the Chinese company is led by two unlikely local heroes: Thwe Thwe Win, 29, and Aye Net, 34. Neither of the two young women has more than the compulsory five-year primary education behind her, and more than a year ago, both were selling vegetables in the local market in Monywa.

“The Chinese company came and bulldozed our fields and the Chinese officials made rude gestures at us when we came to complain,” says Thwe Thwe Win in an interview in Monywa.

The police did nothing, except arrest the two women and some of their comrades. That ignited a mass movement, at a time when freedom of expression is becoming tolerated in Burma after decades of iron-fisted military rule and when anti-Chinese sentiment is rising across the country. Student and labor activists from the old capital Rangoon and elsewhere traveled to Monywa to show support. On 26 October, more than 1,000 local miners, Buddhist monks and members of the general public defied an order by local authorities restricting access to the mine and marched past roadblocks to make merit at a pagoda inside the mining area.

The two women vow not to give up until the project is scrapped and the Chinese company leaves Monywa.

Elsewhere in Burma, people are also complaining about how China treats their country. For more than 20 years, Chinese companies have stripped large swathes of the north of trees, denuding ecologically crucial watershed areas. Chinese merchants have also flooded Burma with cheap consumer goods and fake medicines, explains a local businessman in Rangoon. “China does produce goods of good quality, but only for export to the West,” he said. “Here, they sell only junk. This is an almost racial attitude towards us.”

Even within the ruling military, anti-Chinese feelings run high. Already in 2004, a document was compiled by Lieutenant Colonel Aung Kyaw Hla, a researcher at Burma’s Defence Services Academy located in Pyin Oo Lwin, an old hill station in the highlands northeast of Mandalay.

The 346-page top-secret, thesis, titled “A Study of Myanmar [Burma]-U.S. Relations,” outlines in Burmese the policies now being implemented to improve relations with Washington and lessen dependence on Beijing. The establishment of a more acceptable regime than the old junta after the November 2010 election has made it easier for the Burmese military to launch new policies and have those taken seriously by the international community.

The thesis bluntly states that having China as a diplomatic ally and economic patron has created a “national emergency” that threatens the country’s independence. Aung Kyaw Hla, probably a committee of army strategists rather than a single person, goes on to argue that although human rights are a concern in the West, the US would be willing to modify its policy to suit “strategic interests.” Although the author does not specify those interests, the thesis makes it clear that includes common ground with the US vis-à-vis China. The author cites Vietnam and Indonesia under former dictator Suharto as examples of US foreign-policy flexibility in weighing strategic interests against democratization.

If bilateral relations with the US were improved, the master plan suggests, Burma would also gain access to badly needed funds from the World Bank, the International Monetary Fund and other global financial institutions. The country would then emerge from “regionalism,” where it currently depends on the goodwill and trade of immediate neighbors, including China, and “enter a new era of globalization.”

At the same time, China is clearly taking the new signals from Burma seriously. In February and March this year, the Beijing-based, Chinese-language weekly Economic Observer ran a series of articles about the suspension of the Myitsone dam trying to analyze what went wrong with China’s relations with Burma. “How could something like this happen?” columnist Qin Hui asked. The 14 October Global Times, a daily tabloid published under the auspices of The People’s Daily newspaper, said in a commentary that Chinese companies need to “attach more importance to grassroots voices” in carrying out investment projects such as the Monywa copper mine. According to Burmese journalists, reporters from The Global Times are calling them with questions about pro-democracy leader Aung San Suu Kyi, which never happened before.

It’s too early to say whether Myitsone, and now Monywa, will become a turning point in China’s relations with Southeast Asia, paving the way for a more tactful relationship with countries such as Burma. But popular struggles against two Chinese megaprojects here have no doubt been wake-up calls for the leaders in Beijing. Even smaller countries – and a movement led by two former vegetable vendors in a town in the Burmese outback – are now brave enough to challenge the region’s most powerful economic and political player.

(Bertil Lintner is a Swedish journalist based in Thailand and the author of several works on Asia. He can be reached at lintner@asiapacificms.com. This is published with permission from the Yale Center for the Study of Globalization.)Asia Sentinel