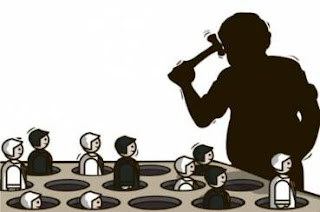 Victims of alleged human rights violations in Indonesia, a country where human rights courts set up in 2000 have yet to convict a single case, are facing an uphill battle to bring perpetrators to justice.

Data from the local NGO Commission for Missing Persons and Victims of Violence (Kontras) estimates more than one million people suffered rights abuses between 1965 and 1998 that took place largely under President Suharto’s military rule, which ended in 1998 with his forced resignation.

“We have an unusual situation in this country. You have all these human rights violations but as things stand, no-one has been found guilty in a human rights court,” said Haris Azhar, co-ordinator of Kontras.

Enforced disappearances
In the tumultuous run-up to the country’s first steps towards democracy in 1998, university students challenging the military regime began disappearing.

Mugiyanto, who like many Indonesians goes by only one name, was detained in 1998.

“I was blindfolded and then held, tortured and interrogated for about four days by the military’s special forces. Then they handed me to the police, and they put me in a local prison for three months. I was then released when the leadership changed,” said Mugiyanto, who chairs the Indonesian Association of Families of the Disappeared (IKOHI).

In May 1998 President Suharto stepped down and was replaced by then Vice-President Bacharuddin Jusuf Habibie.

Mugiyanto said a total of 23 students disappeared, with nine (including him) later released. Thirteen remain missing, including Ucok Siahaan, who was a 22-year-old university student whose family still awaits news.

“He visited us several times [in 1998] and each time, he told us to stock up on food and supplies because the political situation in Jakarta was out of control,” said his father, 65-year-old Paian Siahaan. “In May he telephoned us and said not to go out of the house. He said if anything bad happened, just go to the mosque.”

His family has not heard from him since.

State brutality in Papua
In recent years activists have reported human rights abuses in the country’s remote Papuan region, where a separatist conflict has simmered for decades. The resource-rich region, 3,000km east of Jakarta and including the provinces of Papua and West Papua, has the lowest level of human development of Indonesia’s 33 provinces.

Penihas Lokbere from Jayapura, the capital of Papua Province, said he is one of 105 people arrested by the police in 2000 in the university town of Abepura, about 10km from Jayapura.

According to Human Rights Watch, a group of unidentified people attacked a police post in Abepura, killing two policemen and a security guard.

“The police wanted to retaliate,” said Lokbere. “They came to our dormitory while we were sleeping and arrested us. They didn’t ask any questions.”

Along with his fellow students, Lokbere was imprisoned for three days, where he said he was tortured, handcuffed and beaten with a metal crook. Until now, no one has been convicted.

A 2012 joint report of the International Centre for Transitional Justice (ITCJ) and the Jayapura-based Institute of Human Rights Studies and Advocacy (ELSHAM), recorded nearly 750 rights violations against Papuans from 1960-2012, including arbitrary arrest and detention, torture and killings.

Paul Mambrasar, a representative of ELSHAM said the actual number of violations may be much higher. “Many of the victims are not ready to speak about what happened. The provinces of Papua are militarized and people are worried if they give information, they will be terrorized by the military or the police.”

The Papua region has had decades-long separatist tension related to the stalled implementation of a special autonomy arrangement (granted in 2001); communities’ lack access to natural resource wealth such as gold, copper and timber; and there have been security crackdowns on political demonstrations.

Josef Roy Benedict, Amnesty International’s Indonesia campaigner based in London, said ongoing human rights violations in the region are in part due to a culture of impunity there.

“Police officers tend to be punished only for disciplinary offences, often in closed-door proceedings, while offences by the military are dealt with through the military court system, which lacks independence and impartiality,” said Benedict.

Persecution of Ahmadis
Data from the Jakarta-based NGO Setara Institute calculated nearly 130 violations of religious freedom nationwide from January to June 2012. Most happened in West Java against minority religious groups such as the Ahmadiyah, an Islamic sect that shares many Sunni beliefs with some 500,000 adherents nationwide.

In February 2011 a 22-year-old Ahmadi, Ahmad Masihuddin, was visiting a village outside Jakarta when an Islamic fundamentalist group, which does not recognize Ahmadis as Muslim, attacked Ahmadiyah followers in the village.

"The mob was at least 1,000-strong. We [Ahmadis in the village] were outnumbered, so we ran, but I was captured," said Masihuddin. "They dragged me through a rice field, struck me in the waist with a machete and hit me with bamboo. They said they wanted to cut off my genitals."

It was only when Masihuddin called out to his assailants that he was a Muslim that the attack stopped. "They thought I was one of them, a Sunni," he said. Sunni Islam is the largest branch of Islam in Indonesia.

Three of Masihuddin's friends were killed in the attack. Perpetrators were sentenced to 3-6 months in prison, which Masihuddin said was not commensurate with the crime.

Harkristuti Harkrisnowo, director-general for human rights at the Ministry of Law and Human Rights, acknowledged the sentences were too lenient and suggested that law enforcers need to do more to protect minorities.

“On the ground there are now fundamentalist groups that blatantly threaten minorities,” she said. “The police have difficulties containing these groups, but they must try to deal with this violence.”

In 2008 the government issued a joint ministerial decree banning Ahmadis from disseminating their beliefs on the basis the reformist movement “deviated” from mainstream Islam in its teachings. Hard-line groups have used the decree to justify attacks against Ahmadis, but Harkrisnowo said the decree was issued to protect them.

“They aren’t allowed to publicly assemble for their own protection because if they do, they may incite violence against them,” she said.

But even without assembling for worship, they are still attacked, said Malik Saifurrahman, an Ahmadi from the island of Lombok some 1,200km east of Jakarta. Since 2002, his family house has been destroyed on four separate occasions - before it was completely burnt down in 2006.

"There were many attacks on houses, and about 300 Ahmadis were forced to move," said Saifurrahman, who added he did not know the identity of the attackers.

"I have now moved to Jakarta for study, but my family lives in a government refuge in Mataram [created] for Ahmadis who have had their homes burned down,” he said. "At first the government provided us with food and water, but now that has stopped."

Harkrisnowo said she did not know whether the authorities will re-house displaced Ahmadis.

The US Commission on International Religious Freedom's 2012 report recorded that at least 50 Ahmadiyah places of worship have been vandalized and 36 forcibly closed since 2008, even though the Indonesian constitution guarantees freedom of religious expression.

But guaranteeing this constitutional freedom has been difficult for the state , said Harkrisnowo. “The central government needs to be more firm on this issue.”

Legal wrangling
The National Commission on Human Rights - known locally as Komnas HAM - is an independent, government-appointed commission to monitor violations, advocate on behalf of victims and launch abuse inquiries. The attorney-general’s office then investigates the allegations, except for those that took place before 2000, which are handled by an ad-hoc human rights court set up by presidential decree.

Harkrisnowo said lack of prosecutions for human rights abuses thus far is not due to lack of political will, but rather too-scant evidence.

“In each case, officials have looked at whether there is sufficient evidence, or whether there have been any errors made in terms of legal procedure, and each time have decided that no one can be found guilty,” she told IRIN.

Efforts to create other legal mechanisms to prosecute human rights abuses have stalled.

Next steps
The country’s Constitutional Court declared a 2006 law on Truth and Reconciliation unconstitutional because of a provision that made victim reparations conditional on amnesties being issued to perpetrators. The government is attempting to pass a new law.

Indonesia is a state party to the International Covenant on Civil and Political Rights (ICCPR) and has ratified the Convention against Torture and Other Cruel, Inhuman or Degrading Treatment or Punishment.

But it has yet to sign or ratify the Rome Statute, the treaty that created the International Criminal Court in 2002.

Harkrisnowo said the government is preparing to ratify both the Rome Statute and the International Convention on Enforced Disappearances.

(IRIN is a service of the UN Office for the Coordination of Humanitarian Affairs.)