Lessons That Should Be Learned From ASEAN’s Failure in Cambodia 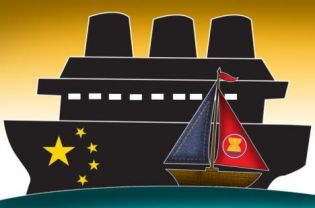 "In the nature of things, it is always a dominant power that has the capacity to dictate a code of conduct for a number o countries in an international arena."

We can call it a failure because what started out as great enthusiasm for a commonly accepted code of conduct in dealing with territorial disputes in South China Sea has turned out to be a diplomatic embarrassment for the Association of Southeast Asean Nations as a regional entity, and Indonesia as its traditional leader.

When Indonesia’s foreign minister, Marty Natalegawa, conducted his shuttle diplomacy tour to convince the Asean members that somehow a COC in the South China Sea would have a chance of being accepted at the meeting between Asean and China, people began to wonder about the foundation of his self-confidence. From the very beginning, it was clear that even among the Asean members themselves conflicting points of view were evident. For instance, the Philippines was not happy that Cambodia, as the host of the Asean summit, seemed to be more interested in safeguarding its bilateral relationship with China. As one of the claimants of some of the islands in the South China Sea, Vietnam was upset that China used the issue to weaken Asean’s political influence by pitting its members against each other.

While many appreciate Indonesia’s willingness to go the extra mile to convince all parties that the establishment of a COC in the area is necessary for their mutual benefit, there is no adequate understanding of the essential prerequisites of an international agreement. If it is initiated by a third party, the mediator must be in such a position that its political leverage has an existential impact on the conflicting parties.

Egypt’s success in brokering the cease-fire between Israel and Hamas recently was very much related to the fact that both protagonists look at Egypt as a determinant factor for their future survival. As far as Hamas is concerned, under the conservative rule of President Mohamed Morsi, Egypt is a reliable ally, especially in times of trouble. As part of its political strategy, Israel cannot afford to cut ties with Egypt. In the eyes of Israeli leaders, Egypt can be a bridge between Israel and the Arab countries that refuse to recognize its existence.

That same logic cannot be applied in Indonesia’s effort to be a mediator in territorial disputes of the South China Sea. Despite their good bilateral relations, in China’s eyes Indonesia’s role cannot be exaggerated. The relationship between the two countries can be characterized by an asymmetrical interdependence in the sense that Indonesia depends more on China than China does on Indonesia.

In the nature of things, it is always a dominant power that has the capacity to dictate a code of conduct for a number of countries in any international arena.

After World War II, for instance, the United States and its allies managed to create the Bretton Woods institutions to regulate the economic and financial interactions among nations.

Beijing has made it clear from the start that its behavior in the South China Sea should be regulated by external actors who are nothing more than a combination of small and middle powers. The concept of a “code of conduct” itself has a lot of regulatory overtones. No wonder China rejected it.

What lessons can Indonesia learn from this diplomatic embarrassment?

Three things. First, forget all the pretension that Asean or Indonesia can regulate China’s conduct in South China Sea. What China is surely interested in is developing a diplomatic discourse from the standpoint of regional stability and security. This is exactly why China agreed to join the Asean Regional Forum in 1994. If the language of our diplomacy contains the pretension of regulating another nation’s conduct, it will inevitably touch on critical issues like sovereignty and pride. Like all other states in the region, China also wants to see the perpetuation of stability and security in Southeast Asia for that is the only way to sustain the economic momentum that it now enjoys.

Second, subjective perception of foreign-policy makers is not a sufficient foundation for any foreign-policy endeavor. It has to be complemented with an accurate understanding of reality. This is to avoid unnecessary embarrassment like the one that Asean, especially Indonesia, had to face in Cambodia.

Last but not least, the constituent of Indonesia’s foreign policy in Asean is first and foremost the Indonesian people themselves.

We may act on behalf of other Asean members only in so far as such policy serves the best interests of our own people. Otherwise, our foreign policy becomes a strange enterprise for the nation itself.

Aleksius Jemadu is dean of the School of Government and Global Affairs at Universitas Pelita Harapan, Karawaci.