Castles in the Cambodian Sand 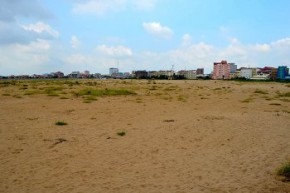 As Cambodia's economy zips along at 7-10 percent growth over much of the last decade, the government insists it is trying to build what it calls a sustainable land policy, including reclaiming terrain lost to landmines and bombs. But others say a corrupt and Chinese-influenced government is trampling the rights of citizens in the name of economic development in what remains a country still recovering from decades of civil war.

Mine clearance frees up land
One of those who has benefited is Ly Susmat, who says the intricate tattoo on his left forearm is a good luck charm. “I got it when I was younger, to try get a pretty girl,” he says. Now married with four children, he just laughs, as if to say 'Oh come on,' when asked if the magic worked. Now the 46 year-old onetime Khmer Rouge soldier says he needs luck with his farm, not with women.

“I need capital to rent a plough, I want to grow highland rice here,” he says, waving an arm toward an 8,000 meter square plot of land outside Seksak Village, a former Khmer Rouge stronghold in the west of the country.

'This is good land,” he says, “I am happy to be able to try to farm here and not worry any more about bombs, but I still don't have much money”

Until six months ago, the fields behind his house in Battambang province were not safe to walk in, before the NGO Mines Advisory Group pitched down in the village to clear mines and other unexploded ordnance, a dangerous and economically-debilitating legacy of civil war in a country where around 80 percent of the people depend on farming for a living.

Ry Saveth has worked on mine and bomb clearance for almost two decades. Pointing to detailed maps of the area around Seksak, studded with red pins to show where mines have been found, he describes a selfless and dangerous job whereby 56 hectares of land is being cleared. It's a meticulous process – marking out individual 25-meter long, 60-centimeter wide strips of ground, each one scanned and any dangerous material removed or detonated, and so on until the area is cleared.

“11 families will get land for agriculture once we finish, hopefully around Dec. 7,” he says. But this investment has come at a cost to some Cambodians, and as Ly Susmat gets to make use of lush farmland close to the Thailand border, where neighbors grow cassava, chilis and dragonfruit, others in Cambodia are less fortunate.

Land, aid and Obama
In recent years, legions of stories of land grabs involving alleged collusion between local politicians and foreign companies – often Chinese – have made headlines, with the Cambodian human rights group Licadho saying that around 400,000 people have been affected by the seizures over the past decade.

The Cambodian government disputes the numbers, with spokesperson Phay Siphan telling Asia Sentinel that “they are exaggerated.”

“One thing we have recommended is more serious action from international donor countries, including placing conditions on aid money,” she says. “We’ve seen very little of that thus far, but the little we saw has worked – for example the World Bank moratorium on assistance to Cambodia in 2011.”

The Bank's decision to halt aid until a settlement is reached with residents around what was Phnom Penh's Boeung Kak lake - site of a now cause-celebre land grab - possibly prompted Prime Minister Hun Sen's moratorium on land concessions announced in May 2012, a move also perhaps undertaken with parliamentary elections due in 2013 in mind.

Nonetheless the influence of western donors and linked agencies such as the World Bank is shrinking in Cambodia, where Chinese investment since 2006 tops US$8 billion. The Chinese government has also allocated US$2 billion in loans and grants – helping build vital infrastructure such as roads and bridges.

Chinese influence was plain to see during the November 18-20 East Asian Summit, which was held in the mammoth Peace Palace, overlooking Boeung Kak in the heart of the city.The 3 day parlay was attended by US President Barack Obama, outgoing China PM Wen Jiabao, India's Manmohan Singh and other regional leaders and focused on trade and economic negotiations, as well as headline-grabbing security issues such as the disputed South China Sea, but the hosts made it clear that Wen was guest of honor, plastering the front of the Peace Palace with banners extolling the China-Cambodia relationship.

No such welcome was given to Obama, who had what US officials described as a “tense” bilateral meeting with Hun Sen shortly after he stepped off Airforce One. Obama is said to have human rights issues – including land – with Hun Sen, who in turn told the US President that, though real, human rights problems in Cambodia are exaggerated,, according to an account of the meeting given by Prak Sokhon, Cambodia's Secretary of State of the Council of Ministers.

Standing ground or treading water?
The high-falutin focus of the meetings didn't stop Boeung Kak locals from trying to catch the newly re-elected American President's attention, however. Pointing to a pile of banners reading “SOS Obama,” local resident Tep Vanny says “we stood on the sand outside for three days during the meeting, to remind him about the human rights problems in our country.”

The sand she mentions is a 103 hectare landfill - where once there was a lake in the heart of the city - awaiting the building of proposed commercial and housing projects by Shukaku, a company with connections to the Cambodian government. Attempts to contact Shukaku for this article were unsuccessful.

Where once people kicked back, feet up with beers in hand as the sun set over the lake, now there is a weed and shrub strewn sandbank rendering once-lively waterfront cafes and guesthouses either shuttered or almost empty, with most of the activity near the lake seemingly focused on the construction of a replacement mosque near the old water's edge, a project funded by a United Arab Emirates royal.

Just over 3,000 families have already taken up the offer of US$8,500 compensation for leaving the area, money which the 794 families who remain living around the former lake say is not enough.

One of those still holding her ground – in every sense - is Tep Vanny, a 31 year old mother of two whose lakeside former grocery shop is now a meeting point for locals protesting their possible eviction.

Above an early-morning din of neighbors bantering over what's in the day's Khmer-language newspapers, she laments that “before we never know about the violence from the police, but now we know,” after several violent crackdowns on protests that left her and fellow protestors injured.

After one protest during the summer, Tep Vanny spent just over a month in jail, along with 12 other protestors, and was only freed on a suspended 2 1/2 year sentence after a vocal local and international campaign.

“The company joined with the police, with the court, with the corrupt politicians. They get their way against us,” she says. Tep Vanny and the remaining families have been told to vacate their homes and accept the compensation offer or be forced out sometime soon without getting anything.

No way, says Tep Vanny. “I have the land title,” she adds, shaking her head and adamant that she will go back to jail rather than walk away.

“I don't just do this for myself or my family, we protest for the community,” she exclaims, pointing to the sprightly grandmother who joined the interview mid-way through.

Forced evictions bring back bad memories
Now 72 years of age, Gheat Koun says she would prefer to be living a more sedate life taking care of her grandchildren, rather than protesting in front of embassies in Phnom Penh's sometimes scorching heat.

Her family was among those offered a segment of the 12 hectares of land on the sand where once the lake waters ebbed, in an apparent concession by Cambodia's government after the World Bank suspended assistance to Cambodia. Nothing has come of that offer since, however, they say.

Gheat Koun's husband is in his 80s, and despite their age and the government's offer, they believe they will have to go. “My heart is broken,” she says, adding that her protest has prompted retaliation against some of her family. “Two of my children had a shop inside one police station in Phnom Penh, but when the protests started they kicked them out, telling them 'you cannot work here, you must leave',” she says.

What Gheat Koun doesn't mention, however, is that she's suffered physically herself. Hanging on the wall inside Tep Vanny's shop-turned-meeting room hangs a photo of the elderly Gheat, her head bleeding after police forcibly broke up a demonstration earlier this year.

Only around one in five Cambodians have land title, partly down to the mass forced evictions carried out by the Khmer Rouge dictatorship from 1975-79, which included driving almost the entire population of Phnom Penh out of the city to work as slave labor in the countryside.

A 2001 law said that people who could prove five years of continuous occupancy could apply to formally own the land, but that does not seem to apply to all the lakeside residents, or to have sorted out Cambodia's ongoing land troubles. The Cambodian government says that it is working to address the issue,, with spokesperson Phay Siphan telling Asia Sentinel that “we have allocated one million hectares of land title to people that had occupied public land.”

The government believes that “the international media makes a drama out of the land issues in Cambodia,” says Phay Siphan, adding that “we, the government, try to make a sustainable land policy both for the people and for the investment in Cambodia.”

But for Gheat Koun, who remembers the 1975 Khmer Rouge takeover well, forced evictions are grimly evocative of those long-gone dark days.

“We had to move out of Phnom Penh when the Khmer Rouge took over. They told us the Americans were going to bomb, and that all people would work together the same way, whether rich or poor,” she recounts, laughing.

“Now we are being forced out again,” she says. “Only this time it is a government and police that only work for the powerful and the rich. Poor people in Cambodia have no rights.”