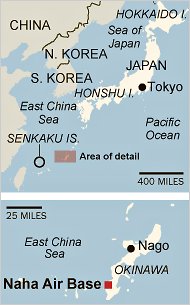 TOKYO — After years of watching its international influence eroded by a slow-motion economic decline, pacifist Japan is trying to raise its profile in a new way, offering military aid for the first time in decades and displaying its own armed forces in an effort to build regional alliances and shore up other countries’ defenses to counter a rising China.

Already this year, Japan crossed a little-noted threshold by providing its first military aid abroad since the end of World War II, approving a $2 million package for its military engineers to train troops in
Cambodia and East Timor in disaster-relief and skills like road building. Japanese warships have not only conducted joint exercises with a growing number of military forces in the Pacific and Asia, they have also begun making regular port visits to countries long fearful of a resurgence of Japan’s military. 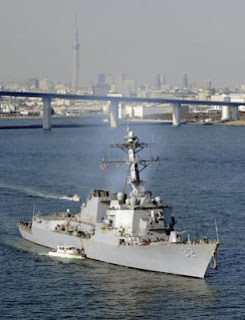 And after stepping up civilian aid programs to train and equip the coast guards of other nations, Japanese defense officials and analysts say, Japan could soon reach another milestone: beginning sales in the region of military hardware like seaplanes, and perhaps eventually the stealthy diesel-powered submarines considered well suited to the shallow waters where China is making increasingly assertive territorial claims.

Taken together those steps, while modest, represent a significant shift for Japan, which had resisted repeated calls from the United States to become a true regional power for fear that would move it too
far from its postwar pacifism. The country’s quiet resolve to edge past that reluctance and become more of a player comes as the United States and China are staking their own claims to power in Asia, and as
jitters over China’s ambitions appear to be softening bitterness toward Japan among some Southeast Asian countries trampled last century in its quest for colonial domination.

The driver for Japan’s shifting national security strategy is its tense dispute with China over uninhabited islands in the East China Sea that is feeding Japanese anxiety that their country’s relative decline — and the financial struggles of their country’s traditional protector, the United States — are leaving them increasingly vulnerable.

“During the cold war, all Japan had to do was follow the U.S.,” said Keiro Kitagami, a special adviser on security issues to Prime Minister Yoshihiko Noda. “With China, it’s different. Japan has to take a stand on its own.”

Japan’s moves do not mean it might transform its military, which serves a purely defensive role, into an offensive force anytime soon. The public has resisted past efforts by some politicians to revamp Japan’s pacifist constitution, and the nation’s vast debt will limit how much military aid it can extend. But it is also clear that attitudes in Japan are evolving as China continues its double-digit annual growth in military spending and asserts that it should be in charge of the islands Japan claims as well as vast swaths of the South China Sea that various Southeast Asian nations say are in their
control.

Japanese leaders have met the Chinese challenge over the islands known as the Senkaku in Japan and the Diaoyu in China with an uncharacteristic willingness to push back, and polls show the public is increasingly in agreement. Both major political parties are also talking openly about instituting a more flexible reading of the constitution that would allow Japan to come to the defense of allies — shooting down any North Korean missile headed for the United States, for instance — blurring the line between an offensive and defensive force.

The country’s self-defense forces had already begun nosing over that line in Iraq and Afghanistan, where Japan backed up the United States-led campaigns by deploying naval tankers to refuel warships in the Indian Ocean.

Japanese officials say their strategy is not to begin a race for influence with China, but to build up ties with other nations that share worries about their imposing neighbor. They acknowledge that even building the capacity of other nation’s coast guards is a way of strengthening those countries’ ability to stand up to any Chinese threat.

“We want to build our own coalition of the willing in Asia to prevent China from just running over us,” said Yoshihide Soeya, director of the Institute of East Asian Studies at Keio University in Tokyo.

Or, as the vice minister of defense, Akihisa Nagashima, said in an interview, “We cannot just allow Japan to go into quiet decline.”

The United States has generally welcomed such efforts by Japan, which are in line with its own strategy of building up Asian nations militarily so they can stand their ground against China, as well as expanding an American military presence in the region.

China, which itself suffered mightily in imperial Japan’s 20th-century territorial grabs, has reacted with warnings that Japan is trying to overturn the outcome of World War II by staging a military comeback. At a defense conference in Australia last month, Lt. Gen. Ren Haiquan of China warned his hosts against allying more closely with what he called a fascist nation that once bombed the Australian city of Darwin.

In a measure of the geopolitical changes roiling the region, however, concerns about any resurgent Japanese militarism appear to be fading in some countries embroiled in their own territorial disputes with China, like Vietnam and the Philippines, the scene of fierce fighting during the war.

Analysts there and elsewhere in the region said their countries welcomed, and sometimes invited, Japan’s help.

“We have already put aside our nightmares of World War II because of the threat posed by China,” said Rommel Banlaoi, a security expert at the Philippine Institute for Peace, Violence and Terrorism Research
in Manila.

On a recent morning, 22 coast guard officials from a dozen Asian and African nations joined a training cruise around Tokyo Bay aboard a sleek, white Japanese Coast Guard cutter. The visitors snapped photos of the engine room, the electronics-studded bridge and 20-millimeter cannon. Before the cutter left port, the foreign contingent and the Japanese crew stood at attention on deck facing each other, then bowed deeply.

“Japan is joining the United States and Australia in helping us face China,” said Mark Lim, an administrative officer from the Philippine Coast Guard who joined the cruise.

Indeed, Japan is widely viewed as having the only nation in the region with a navy powerful enough to check China.

Although Japan’s defense spending has been shrinking, the military budget is, by many measures, the sixth largest in the world. In keeping with its pacifist stance, Japan has none of the long-range missiles, nuclear submarines or large aircraft carriers necessary for projecting real power. But its diesel-powered subs are considered the best of their type in the world. The Japanese Navy also has sophisticated Aegis-equipped cruisers capable of shooting down ballistic missiles, and two large helicopter-carrying destroyers that could be retrofitted to carry fighter jets that can take off vertically.

The Japanese Navy took a big step toward opening up in 2009 by holding a joint military drill with Australia, its first such exercise with a nation besides the United States. It has since joined a number of multinational naval drills in Southeast Asia, and in June held its first joint maneuver with India.

Analysts and former officials say Japan’s military has so far been careful to offer assistance in noncombat-related areas like disaster relief, antipiracy and health care. But even these limited steps build ties between military forces. One plan now under negotiation is to train medical personnel from Vietnam’s navy next year to care for the crews on that nation’s newly purchased Russian-built submarines.

“Our strategy is to offer hardware and training to create mini-Japanese coast guards and mini-Japanese Self-Defense Forces around the South China Sea,” said Tetsuo Kotani, a former defense ministry official who is now a researcher at the Japan Institute for International Affairs in Tokyo.

Under the decade-old civilian aid program to build up regional coast guards, Japanese officials say they are in the final stages of what would be their biggest security-related aid package yet, to provide the Philippine Coast Guard with ten cutters worth about $12 million each. Ministry officials say they may offer similar ships to Vietnam.

Japan’s Ministry of Defense, meanwhile, said it planned to double its military aid program next year to help Indonesia and Vietnam. Vietnam could also be among the countries Japan would allow to buy its
submarines, according to a former defense minister, Toshimi Kitazawa, who named Australia and Malaysia as other possible buyers.

“Japan has been insensitive to the security needs of its regional neighbors,” Mr. Kitazawa said in a recent interview. “We can offer much to increase their peace of mind.” The New York Times By MARTIN FACKLER