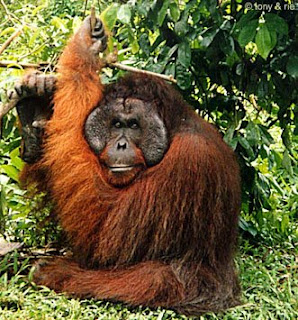 Clearing of tropical rainforest for paper industry, palm oil and other plantations


INDONESIA: A massive logging operation planned by Asian Pulp & Paper and the Sinar Mas Group (APP/SMG) and associated companies is to include large portions of the only areas that Sumatran orangutans have ever successfully been re-introduced
into the wild, conservation groups active in Jambi province have
learned.

Also threatened in natural forest areas around the Bukit Tigapuluh National Park are a quarter of the last critically endangered Sumatran tigers left in the wild, the Talang Mamak and Orang Rimba indigenous peoples and a significant population of endangered Sumatran elephants. Conservation groups WARSI, the Sumatran Tiger Conservation and Protection Foundation, the Frankfurt Zoological Society, the
Zoological Society of London and WWF-Indonesia learned last week that an APP/SMG joint venture had acquired the largest of the former and inactive ex PT IPA selective logging concessions in the Bukit Tigapuluh forest area - covering the orangutan reintroduction area and areas recording the most frequent sightings of tigers.

With the latest acquisition, APP/SMG now holds the majority of the buffer areas to the national park , including large areas the Forestry Service of Jambi and the National Park management authority agreed in 2008 to designate as the Bukit Tigapuluh Ecosystem which would be sustainably managed as natural forest.
Less than one third of the 2007 forest cover is within the National Park, with the areas most preferred by animals and indigenous peoples lying in the surrounding lowland forests now vulnerable to clearing.

Between 1985 and 2007, Sumatra island lost 12 million hectares of natural forest, a 48 percent loss in 22 years, with the accelerating rampage provoking international concern over the loss of biodiversity, smoke hazards from forest fires and peat
swamp and soil degradation from clearing that made Indonesia one of the largest sources of the emissions causing climate change.