Burma - the 'Would be' Shangrila 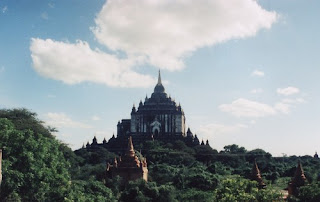 Ethnic Groups in Myanmar Hope for Peace, but Gird for Fight

Extracts from Thomas Fuller/International Herald Tribune
LAIZA, MYANMAR — The Kachin tribesmen who inhabit the hills along Myanmar’s border with China have a reputation as stealthy jungle warriors, famous for repelling Japanese attacks in the Second World War with booby traps and instilling terror by slicing off ears to tally their kills.
Now, as they have many times in their war-scarred history, the Kachin are hoping for peace but are prepared for battle with Myanmar’s central government.
As Myanmar’s military government prepares to adopt a new and disputed Constitution next year, a fragile patchwork of cease-fire agreements between the central government and more than a dozen armed ethnic groups is fraying.
The new Constitution would nominally return the country to civilian rule after four and a half decades of military government and, in theory, could formally end the now dormant civil war that has plagued the country since it gained independence from Britain in 1948. But as a precondition for what they portray as a fresh start, Myanmar’s ruling generals are ordering the Kachin and other groups to disarm and disband their substantial armies.
So far, the answer is no.
The ethnic groups control large pockets of territory in the northern and eastern borderland areas, and, if they disarm, they risk losing control over their lucrative trade in timber, jade, gems and, in some cases, heroin and methamphetamines. They are loath to give up their hard-won autonomy to the Myanmar military, which is dominated by the Burman ethnic group they have long resented.
The volatile and remote northern reaches of Myanmar are rarely reported on in the Western news media because of the difficulty accessing the armed groups. The visit by this reporter to Laiza was the first by a foreign newspaper correspondent in several years.
By the tumultuous standards of Myanmar’s six decades of independence, the country has been relatively peaceful over the past decade and a half, thanks to the cease-fire agreements.
Myanmar captured the world’s attention when the government quashed the uprising of Buddhist monks in September 2007 and when it refused to allow some international assistance after a deadly cyclone last May.
But those events only served to underline the firm grip that the generals have over the low-lying parts of the country, where the majority Burman population is concentrated.
It is a very different picture in the upland regions, where the government’s control has always been tenuous. A resumption of civil war in the north and east is by no means a foregone conclusion — the generals could back down from their demands to disarm, or the ethnic groups might relent and decide to fully adopt the new Constitution.
But if the conflicts re-ignite, which some analysts say is likely, it could resonate well beyond Myanmar’s borders, resulting in outflows of refugees into neighboring countries like Thailand and China and a resurgence of the heroin business, which in the past has thrived under the cover of war.
The largest borderland groups, drawn from ethnic groups like the Wa, Shan and Kokang, are united in their bitterness over their historical domination by the Burman.

• During the Cold War, China, Thailand and the United States supplied arms and other assistance to some borderland groups. Now commercial interests, including many shady businesses, have replaced ideological ones.
• The Kachin hills are home to the world’s most lucrative jade mines. The area inhabited by the Shan has the largest and best-quality rubies found anywhere. All the territory controlled by the ethnic groups has prized varieties of tropical hardwood.
• And drug syndicates, many of them with ties to the ethnic groups, profit handsomely from the trafficking of both illegal and counterfeit drugs.
• Adding to the complexity of the situation, Myanmar, by the nature of its location between India and China, is now the focus of a geopolitical contest for influence by the region’s big powers increasingly hungry for natural resources.
• Chinese companies are building a series of hydroelectric dams on northern tributaries of the Irrawaddy River (despite Kachin objections) and have helped finance and build roads inside Myanmar, facilitating both the sale of Chinese electronics and clothing in Myanmar and the export of timber and other commodities into China.
• China recently beat India in securing a 30-year concession on natural gas from Myanmar, and construction will reportedly start soon on twin pipelines crossing Myanmar from the Bay of Bengal and connecting to the southern Chinese city of Kunming.
• In March, China and Myanmar signed a “cooperation agreement” on the oil and gas pipelines, but key details are vague.
• The strategic objective for China is access to the Bay of Bengal, thus avoiding having to ship oil through the Strait of Malacca, a costly detour and a security threat if that choke point is ever blocked. But the project is seen by many as a risky venture.
• “Burma is not a stable place when you get out into these remote areas that the pipeline is
• The Constitution, which Myanmar’s generals say was adopted by more than 90 percent of voters in a referendum last year and will take effect after elections next year, prescribes “genuine multi-party democracy” and recognizes what it calls “self-administered” areas. But ethnic leaders say this falls short of the autonomy they want.
• They also point out that the document preserves a dominant role for the military, including the right of the commander in chief of the armed forces to appoint a quarter of the Parliament and to remove the president.
• And because the Constitution mandates that only the national armed forces provide defense and security, the junta is demanding that all other groups disarm.
• The most heavily armed group along the Chinese border is the United Wa State Army, which has about 20,000 soldiers and new armaments including field artillery and anti-tank missiles, according to Bertil Lintner, an expert on Myanmar’s ethnic groups and co-author of the book “Merchants of Madness,” which deals with the drug trade among ethnic groups.
• In Laiza, it is easy to see why the Kachin want to maintain their autonomy.
• Residents escape many of the deprivations so common in other parts of Myanmar, one of the world’s poorest countries: Electricity from a nearby hydroelectric dam is reliable, cellphone service provided by Chinese communications towers across the border is cheap (obtaining a cellphone number inside Myanmar typically costs $2,000), and the local administration even stamps out its own vehicle license plates, skirting Myanmar’s highly restrictive car ownership policies.
• In addition to its own army, the Kachin have a police force, schools, a teacher’s training college and their own customs agents, who monitor the border crossing with China.
• Laiza is no Shangri-La — the town struggles with drug addiction and other social ills common to many border areas — but it feels more free than the military-controlled areas in Myanmar, where dissidents are repeatedly rounded up and sentenced to long jail terms.
•
Posted by Kerry B. Collison at 2:00 PM