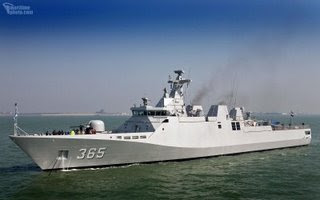 Indonesian Navy Was Set To Fire on Malaysian Warship
The Indonesian Navy was moments away from firing on a Malaysian warship that encroached deep into Indonesian territorial waters earlier this week, but called off the attack when the intruder retreated.
The latest incident highlights growing tensions in the disputed
oil-rich waters of Ambalat in the border region between Malaysia
and Indonesia in the Sulawesi Sea, with the Navy stating on
Thursday that the Malaysian Navy and Marine Police had intruded
into Indonesian waters at least nine times since the beginning
of the year.
The Malaysian Fast Attack Craft Gun KD Yu-3508 vessel penetrated 12 nautical miles into Indonesian maritime territory where it ignored demands from the captain of the Indonesian KRI Untung Suropati-872 Parchim-class corvette to retreat.
The Indonesian Navy has now positioned seven battleships in the area as preemptive measures to secure the Ambalat territory.
The Malaysian Navy has as many as four warships in the area.
Posted by Kerry B. Collison at 2:11 PM