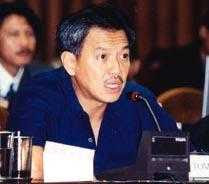 A CONTROVERSIAL Jakarta business tycoon with close links to the
Indonesian military has been given secret approval to build a
$US150 million ($A205 million) shopping centre and hotel on
prime land in central Dili.
The deal to give Tomy Winata, who amassed a fortune through
businesses operated on behalf of the Indonesian military, the
go-ahead for East Timor's largest private project has raised
renewed questions about commercial decisions by the Government
in Dili.
The Indonesian army laid waste to East Timor after it voted for
independence in 1999 and was responsible for massive human
rights abuses during Jakarta's 25-year rule of the territory.
East Timor's Tourism, Trade and Commerce Minister, Gil Alves,
confirmed Mr Winata was given approval to build on government
land without a public tendering process.
Responding to questions from The Sunday Age about the deal, Mr
Alves said Mr Winata was given the go-ahead based on the merits
of the project.
"Mr Winata went through the same criteria, processes and
procedures as all foreign investors to Timor-Leste," he said.
The shopping complex and hotel will be built on government land
and in buildings formerly used by the UN and East Timor's
security forces. Questions are being asked in Dili about a lack
of transparency.
Mr Alves said he believed Mr Winata submitted his proposal in
2007 but the Government has not released details of it until now.
The lease follows a Government decision to give notorious
Jakarta gangster Hercules Rozario Marcal a contract to develop a
supermarket on the Dili waterfront and comes amid reports of
widespread corruption in Dili.
Mr Winata's Artha Graha Group has interests in hotels, gambling,
logging and plywood, real-estate, information technology,
insurance and banking. He is also reputed to have links to
Jakarta's murky nightclub industry.
Deputy Prime Minister Mario Carrascalao has asked to review Mr
Winata's contract.
"I am concerned that people like Mr Winata will come here and
take advantage of the situation," he told The Sunday Age. "I
have asked for all the documents. I will study them to see if
this in the best interests of East Timor."
Mr Carrascalao, East Timor's governor during the Indonesian
occupation, was appointed four weeks ago to review all
government contracts in an attempt to crack down on corruption.
But he said documents on land deals in Dili he had asked for had
not been released to him.
Fretilin, the main opposition and the largest political party in
East Timor, said it was deeply disturbed by the lease given to
Mr Winata and the earlier arrival in the country of Hercules,
who has been linked in the past to Mr Winata.
"Interestingly, these two people have close connections with the
Indonesian military, especially those linked to the Kopassus
security forces who have a long history of human rights
violations in East Timor," Fretilin vice-president Arsenio Bano
said.
"We fear that more of these type of people from Indonesia will
come to East Timor. We believe this is a wrong direction for
East Timor to take," Mr Bano said.
Ten years after winning independence, and with poverty and
unemployment widespread, East Timor is desperate for foreign
investment. Mr Alves said the Winata project was expected to
create 300 jobs in the hotel and many more in the shopping
district.
But a lack of transparency in government decisions is deterring
some investors. Australian business sources complain of a lack
of clear process and favouritism in the awarding of government
contracts.
Mr Winata is a controversial figure in Jakarta where as well as
acting as a de facto banker for the armed forces he is a
generous donor to political parties.
Retired army officers working for his business empire include
former general Kiki Syahnakri, who in 2003 was indicted by UN
prosecutors for crimes against humanity committed in 1999.
While Mr Winata strongly denies allegations of criminal links,
in 2003 thugs who said they were acting on his behalf attacked
the offices of Jakarta's respected Tempo weekly over a story
that suggested he stood to benefit from a fire in the country's
largest textile market, which he had hoped to renovate.
He subsequently sued Tempo journalists for criminal defamation
and the magazine's editor was sentenced to a year in jail. The
conviction was overthrown on appeal.
The Age (Melbourne) by Lindsay Murdoch and Tom Hyland
Posted by Kerry B. Collison at 2:04 PM

Email ThisBlogThis!Share to TwitterShare to FacebookShare to Pinterest
Labels: Indonesia and East Timor