Mahathir and Najib in Divorce Court
The former PM appears about ready to have a go at yet another successor
The honeymoon between Malaysia's new prime minister, Najib Tun Razak, and the irascible 84-year-old Mahathir Mohamad, who played a major role in driving Najib's predecessor from office, is over almost before it began.
Najib, gambling that the former premier's influence is waning within the ranks of the United Malays National Organisation, has broken decisively over a number of hot-button issues with Mahathir, who held office for 22 years before stepping down in 2003 in favor of Abdullah Ahmad Badawi. Many of them involve a cozier relationship with the Singapore government, with which Mahathir carried on a rocky relationship. 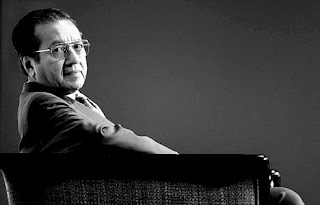 Earning Mahathir's enmity could be dangerous. Badawi, who came into office as a reformer but stumbled, was attacked by Mahathir almost from the time he became prime minister, especially after cancelling a series of Mahathir's favorite projects. He was
beset by a series of other problems, including a fading economy, perceptions of rising crime and a passive personality. He led his party to disastrous elections in 2008 in which the Barisan Nasional, or national ruling coalition, lost its two-thirds hold on the national parliament for the first time since independence.
Najib faces serious challenges. In addition to the widespread perception of his own corruption in connection with billions of dollars in contracts let to UMNO cronies when he was defense minister, he has the continuing millstone of the economy around his neck. As late as two weeks ago, the stimulus package he put into place was expected to result in gross domestic product growth of plus or minus 1 percent. However, the economy slipped
disastrously, by 6.2 percent year-on-year in the first quarter and Najib said Thursday that it could contract by as much as 4 to 5 percent for the full year.
And, as Mahathir has pointed out, despite his promises to rid the party of the old-guard rent-seekers that got UMNO in trouble with the wider public prior to the 2008 election, he has brought them back in growing numbers.
Asia Sentinel
Friday, 29 May 2009
Posted by Kerry B. Collison at 4:08 PM