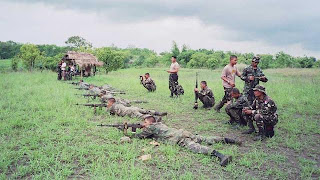 Philippines Military Hit List
The Armed Forces of the Philippines's "order of battle," specifically named and targeted more than 100 Filipinos in a document titled "JCICC 'AGILA' 3rd QTR 2007 OB VALIDATION RESULT" prepared by the intelligence staff of the armed forces' 10th Infantry Division in Southern Mindanao.
In the Philippines, an "order of battle" is a veritable hit list.
In March, the New York-based Committee to Protect Journalists charged that the murders of 24 Filipino journalists remain unsolved, one of the highest number of media killings in the world.
In recent years extrajudicial killings of political activists have been denounced by Human Rights Watch and others as a government-sanctioned "dirty war" against left wing opponents.
Posted by Kerry B. Collison at 1:37 PM