'Low road' no longer an option for leaders

Indonesian President Susilo Bambang Yudhoyono can walk with his head held high once he leaves office.

THE suicide of South Korea's former president Roh Moo-hyun points to what's happening to leaders everywhere: they are becoming more accountable. Or should we say, more held to account? Before the Internet, before the push for internal transparency, before the advent of "people power", leaders had a pretty easy time plundering their countries. Who could stop them? The buck stopped at their desk, in more ways than one. South Korea is a shame culture and Roh did the needful, in his mind.
Not too long ago, you could more or less own a country, as Mobutu Sese Seko owned Congo or Zaire as he renamed it, you could allow all the roads to disappear into bush, so that potential opponents couldn't collaborate, while you luxuriated in your villa on the Cote d'Azur. The country went to and stayed in hell, mostly because of one man. Finally, a rebellion ended his rule but his country was all but dead and is now being torn apart from all sides. 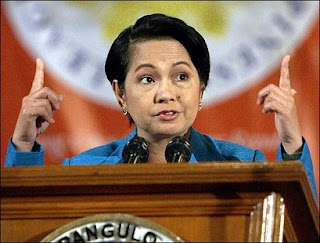 Then there was another popular rebellion that put Gloria Arroyo in office, a PhD in economics who knew she could count on almost a decade in power. You would have thought her ambition would have been her legacy, if not the simple desire to benefit her country. But her legacy is that she's the most unpopular president in Filipino history -- and was rated the most corrupt in popular surveys.

She and her husband already had substantial wealth. But it's just overwhelmingly apparent that she doesn't want to leave Malacanang palace and will do anything to stay on.
She has just about run out of options. She recently "retired" the military and police heads ahead of schedule, giving them ambassadorships to Brunei and the Netherlands, so that she could get two generals whom she thinks she can count on in her last legal months in office, if an "emergency" transpires.
I think we know the kind she has in mind, the kind Ferdinand Marcos orchestrated to declare martial law. But most people think she can't get away with it, because of the "new rules" for leaders all over the world.
Or she can try what her people have been talking about -- seeking a "higher road" and run for the House of Representatives from her home province, Pampanga, anoint a successor with her massive funds, and then manouevre to bring about a parliamentary government, where she'll be the prime minister -- and her anointed successor just a figure-head. But there might be a lot of roadblocks for that. She just couldn't be less popular or more transparent in her obvious goals.
But the real point is that out of the palace, she's vulnerable. The new president only has to give a single piece of paper to a lawyer anywhere in the world to freeze properties of hers -- like those in San Francisco -- on the allegation that laundered money was used to acquire them.
Then all the lawyer has to do is untangle all the transactions in that first acquisition to trace all the others, and all the fronts, cut-outs and other legal frauds to launder money. It doesn't take long (full disclosure: I chair a company in Boston that does exactly this). This is another of the new rules governing leadership.
When the Philippines gets rated as the most corrupt country in Asia, it affects investor attitudes. And it just lowers the reputation of the country generally.
You'd think leaders would finally get the point. They are elected or appointed to be stewards of their country. And now there are terrifying consequences when they take the low road.
Richard M. Nixon bit the dust in 1974. Marcos, Suharto, and a long list of others got overthrown because of their corruption. The prime minister of Ukraine got convicted in the US for corruption, and other countries now have legal procedures for bagging leaders who've broken international law -- even when they're abroad.
A leader can do his job like a real professional -- like Susilo Bambang Yudhoyono in Indonesia, and upon leaving office walk high all over the world, privileges and honour everywhere. Or they can risk all that for money -- something barely needed after high office, thanks to those very privileges a good leader is routinely extended.

In the Philippines, one man's leadership put down nine coup attempts, ended an insurgency and ethnic rebellion, and got his country out of its doldrums -- Fidel Ramos. Then a fool came to office and reversed most of the gains -- Joseph Estrada -- who even plays around with running again, after having been convicted of plunder.
In Malaysia, Ramos's counterpart, Tun Dr Mahathir Mohamad, worked miracles and was never seriously attacked for corruption.
He transformed Malaysia from a primary-products exporter to a middle-size and highly respected industrialising state.
It's all about leadership.

The writer was emeritus professor at the Fletcher School of Law & Diplomacy, Tufts University
Posted by Kerry B. Collison at 2:26 PM

Email ThisBlogThis!Share to TwitterShare to FacebookShare to Pinterest
Labels: 'Low road' no longer an option for leaders