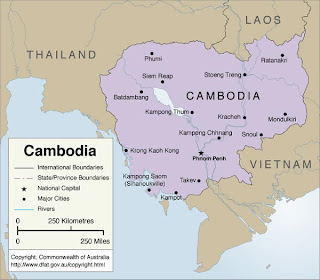 Australian Government Travel Warnings for Cambodia
Cambodia overall This Advice is current for Sunday, 31 May 2009.

This advice has been reviewed and reissued. It contains new information under Local Laws (new procedures to legalise marriages between Cambodians and foreigners). The overall level of the advice has not changed.


Summary
• We advise you to exercise caution and monitor developments that might affect your safety in Cambodia because of the risk of civil unrest, violent criminal activity and terrorism.
• Pay close attention to your personal security and monitor the media for information about possible new safety or security risks.
• In recent years, Cambodian authorities have disrupted a number of bomb plots, most recently on 3 January 2009, when three improvised explosive devices were discovered in Phnom Penh.
• There is an ongoing border dispute between Cambodia and Thailand relating to land adjacent to the Preah Vihear Temple (Khao Pra Viharn in Thai). There were instances of fighting between Cambodian and Thai military troops in October 2008 resulting in some injuries and fatalities. The temple is currently closed to tourists. Australians are urged to avoid travel to this area and to monitor the local media.
• You should avoid protests, demonstrations and political gatherings as they may turn violent.
• There have been recent reports of an increase in assaults and armed robberies occurring at the Riverfront area in Phnom Penh and in Sihanoukville, particularly at isolated beaches. You should exercise vigilance when travelling through this area at all times but especially after dark.
• The World Health Organization (WHO) has confirmed human cases of avian influenza in Cambodia. See the Health Issues section below for advice to Australians travelling to or resident in Cambodia.
Posted by Kerry B. Collison at 2:14 PM