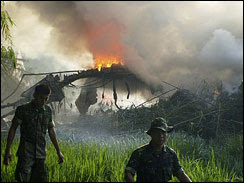 Some of the deadliest military and commercial airline crashes in
Indonesia in recent years:

April 6: A Fokker 27 military aircraft slams into an airport
hangar in the city of Bandung on Java island, killing 24.

March 7, 2007: A Boeing 737 jet operated by national airline
Garuda shoots off a runway and erupts in flames in Yogyakarta on
Java, killing 21 people.

Jan. 1, 2007: A plane belonging to budget airline Adam Air
plunges into the sea in central Indonesia in stormy weather,
killing all 102 on board.