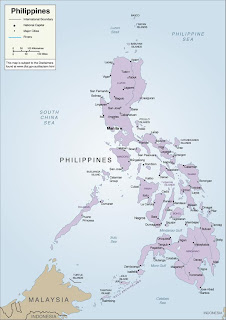 Philippines overall This Advice is current for Sunday, 31 May 2009.

Mindanao, including the Zamboanga Peninsula and the Sulu Archipelago
This advice has been reviewed and reissued. It contains new information in the Summary and under Health Issues (H1N1 Influenza 09 (Human Swine Influenza)). The overall level of the advice has not changed.

Summary
• A small number of confirmed cases of H1N1 Influenza 09 (Human Swine Influenza) have been reported in the Philippines. For further information see our travel bulletin on H1N1 Influenza 09.
• We advise you to exercise a high degree of caution in the Philippines because of the high threat of terrorist attack and the high level of serious crime.
• Pay close attention to your personal security at all times and monitor the media for information about possible new safety or security risks.
• Terrorist attacks could occur at any time, anywhere in the Philippines, including in Manila. We continue to receive credible reports indicating terrorists are planning attacks against a range of targets in a variety of locations, including places frequented by foreigners. You should avoid places known to be terrorist targets (see the Terrorism section below).
• Violent crime is a significant problem in the Philippines (see the Crime Section below).
• We strongly advise you not to travel to Mindanao, including mainland Mindanao, the Zamboanga Peninsula and the Sulu Archipelago, due to the very high threat of terrorist attack, including kidnapping, and related counter-terrorism operations. Armed clashes between the Philippines Armed Forces and Moro Islamic Liberation Front are continuing in central Mindanao. Attacks occurred in late 2008 against military and civilian targets. Further attacks cannot be ruled out.
• There is a danger of kidnapping throughout the Philippines, particularly in the southern Philippines including coastal and island tourist resorts and dive sites. Terrorists have kidnapped foreigners from these areas in the past.
• The typhoon season normally runs from late May to early December. This is also the rainy season when tropical storms, flooding and landslides may occur.
Posted by Kerry B. Collison at 1:59 PM

Email ThisBlogThis!Share to TwitterShare to FacebookShare to Pinterest
Labels: Australian Government Travel Warnings for the Philippines