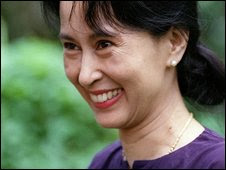 Myanmar's Southeast Asian neighbours have stayed largely silent over the trial of opposition icon Aung San Suu Kyi.
The Association of Southeast Asian Nations (ASEAN) has long
pursued a softly-softly approach towards promoting democracy in its most troublesome member, in contrast to the tough sanctions preferred by Western nations.
But it has little to show for its efforts since admitting
Myanmar to the club in 1997, as the ruling generals have kept Aung San Suu Kyi under house arrest for years and brutally cracked down on protesters in 2007.
Nobel Peace Prize laureate Aung San Suu Kyi faces trial on
Monday on charges of violating the terms of her house arrest, after an eccentric American swam to her lakeside prison-home earlier this month.
Despite talks among ASEAN envoys in Yangon, the 10-member group has still not issued any official pronouncement on the matter since the charges were announced on Thursday.
The latest debacle is especially embarrassing as it comes just months after the bloc adopted a new charter setting out benchmarks for democracy and human rights.
Posted by Kerry B. Collison at 1:49 PM