Russia, Ukraine and the West 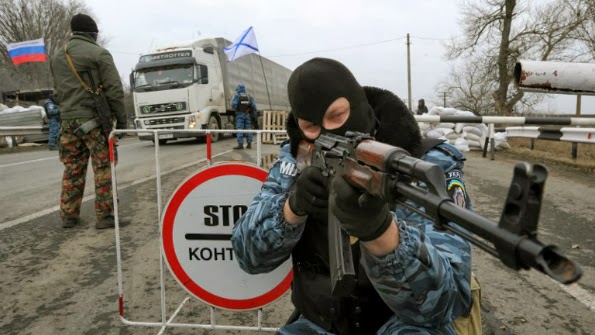 How will the West read Putin’s playbook?

(Kerry’s note: Both the USA and UK leadership smack of hypocrisy over their positions regarding the Russian presence in Crimea. At least Putin is trying to protect Russians. Compare this with the USA-UK sponsored invasion of Iraq, the deaths of more than 100,000 as a result of the fabricated reason for that invasion and ultimate demise of the Saddam regime).

VLADIMIR PUTIN did not take long to show what he thought of Barack Obama’s warning shot that there would be “consequences” for continued Russian military intervention in Ukraine. The prospect of those consequences—Obama mentioned only the suspension of America’s part in the preparations for the June meeting of the G8 in Sochi—did not exactly seem to strike terror into the Russian president’s heart. Within hours he had called on and received backing in Russia’s upper house of parliament for the authorisation of troops for an invasion (or “stabilisation force” in Putinspeak). Not just of the autonomous largely Russian-speaking Crimea, where Russian troops have already seized key facilities and where Russia has a leased naval base, but potentially, and more ominously, of the whole of Ukraine.

Nor does it seem likely that the 90-minute telephone call between the two men that took place in the aftermath of the unanimous Duma vote will have persuaded Putin to pause for consideration. Although a transcript of the conversation has not been revealed, it appears that Obama was trying to nudge Putin towards working through an internationally mediated process that would involve observers on the ground to ensure that the rights of Russian-speakers in the country were not infringed and confidence-building talks with the Ukraine government to recognise the special status of Crimea. That all sounds perfectly sensible, but it is far removed from the trajectory that Putin appears to be on.

The reality is that Putin sees holding Ukraine within Russia’s sphere of influence as a vital national interest that he is willing to run pretty big risks to secure. What is more, it seems highly probable that he does not take threats from Obama particularly seriously. He has seen at close hand the American president’s disastrous vacillation over Syria, culminating in the scuttling away from his own red line declaring punishment for the Assad regime if it used chemical weapons. He no doubt also draws conclusions from big American defence spending cuts in the pipeline and Obama’s extreme sensitivity to the war-weariness of American voters.

If Putin believes (as he almost certainly does) that Obama will do little more than deliver a petulant slap on the wrist, he will have no compunction in putting into operation a familiar playbook. Everything that has happened so far is almost a carbon copy of the tactics used to occupy and effectively annex South Ossetia and Abkhazia in 2008: manipulate, provoke, foment a sense of crisis that prompts an appeal for aid and then send in Russian “peacekeepers”.

The difference is that Ukraine is a country of 46m people with by no means insignificant armed forces of its own. It is also bankrupt, and a majority of its people want to be Ukrainians, not subjects of a Russian puppet government.  Putin is thus unlikely to want to push things so far that Russian forces get sucked into a hot war in Ukraine against fellow Slavs. With his own economy stagnating, he will surely have second thoughts about taking on the burden of an occupation. Furthermore, whereas after the early 1990s Russia never recognised that South Ossetia and Abkhazia were under Georgia's control, it is a signatory of a 1994 treaty guaranteeing the territorial integrity of Ukraine.

But Ukraine's size and importance also make the current crisis a far more threatening security issue for the West than Russia’s intervention in Georgia. While it is easy to criticise Obama’s infinite capacity for thoughtful inaction, the dilemmas for Western diplomacy are real enough. The problem is that like the fox, the West knows lots of different things but is not sure what it really wants, while Putin is like the hedgehog that knows just one big thing, namely that Ukraine, especially in the south and east, is really part of Russia's world.

A military response to Russian aggression or the threat of fast-track NATO membership for Ukraine are unthinkable. So the West will fall back on lesser, diplomatic measures in an attempt to isolate Russia within the international community. First, all seven of the other G8 members could say they are not going to Sochi unless Putin backs off. Secondly, the US Congress could substantially widen the application of the so-called Magnitsky Law to include Putin and his Kremlin cronies. Thirdly, trade sanctions could be applied including work to begin freezing Russian banks out of the international financial settlement system. Fourth, a UN Security Council resolution could be prepared condemning Russia for aggression against an independent country that might attract the support of China (always first to denounce intervention in the affairs of a sovereign state) even though Russia would, of course, veto it. Last, the West needs to show ordinary Ukrainians that it will back the new government and that it, not Russia, can offer a path to prosperity.

Russia is not the old Soviet Union, which was relatively impervious to diplomatic and economic censure. Putin knows that Russia could pay a high price for what it is doing in Ukraine. For now, he believes that the risk is worth taking because he sees the West as supine and decadent, more worried about keeping Russian oil and gas exports flowing than about standing up for the idea of a Europe whole and free. It is now up to Obama whether he wants to show the leadership that will prove him wrong. ‘The Economist’